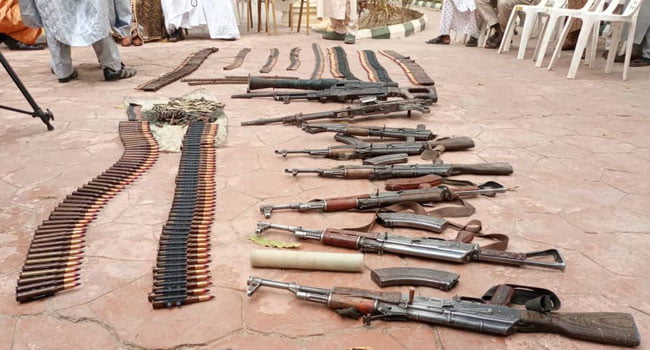 No fewer than 30 AK-47 rifles, 2 GPRP rifles, rocket launchers and a large cache of ammunition have been surrendered by Muhammed Sani, popularly known as Zakwi.

Sani is the son of a murdered notorious bandit leader in Zamfara.

Receiving the bandits and the arms from Zakwi and other bandits at the Government House in Gusau, the state capital, Governor Matawalle, Thursday, said he was very optimistic that banditry would soon end in the state, considering the way bandits were trooping in to surrender their weapons.

The repentant bandit, Zakwi, who took over leadership from his late father Buharin Daji, one of most dreaded bandits in the state, swore with the Holy Qur’an that, henceforth, he would never return to his past life.

“I swear in the name of the Almighty Allah, I will never either kill, kidnap or disturb the peace of innocent citizens of Zamfara State and even beyond again. I also pray God to guide me to live a peaceful life.

“ A large number of bandits that are still living in the forests are willing to embrace the government peace accord and reconciliation process as we were all made to understand that, the present administration of Governor Matawalle does not mean to trap and harm us, but rather meant to restore peace and tranquility in the state,” he added.

It could be recalled that Governor Bello Muhammad Matawalle has assured the repentant bandits of equal treatments without any victimization by any person or group of persons or individual in the state.

“My administration was committed towards making you live a normal life and to take good care of your children’s education, health services and their training with a view to build a bright future for them”, the governor had assured.

BBNaija: Cross reveals what could happen to Saga if Nini fails to return