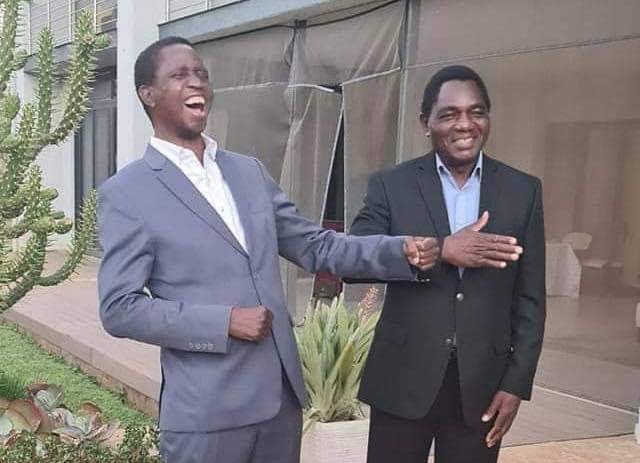 Once the Electoral Commission Chairman, Esau Chulu declared Hichilema winner, supporters across the nation went into a frenzy.

The forthcoming inauguration would be the third time power has shifted from a ruling party to an opposition platform since independence from Britain in 1964.

Lungu had alleged that the election was not free and fair, citing attacks against agents of the ruling Patriotic Front Party (PFP) in three provinces.

Hours after his rival emerged victorious, Lungu and Hichilema met at the home of a former leader, Rupiah Banda.

The President posted photos of the meeting on his Facebook page.

“Earlier today the President-elect Mr Hakainde Hichilema and I met at the residence of our 4th Republican President Rupiah Banda”, he wrote.

Lungu said they discussed matters concerning Zambia’s future and that the meeting was held in a cordial atmosphere.

“I wish to thank all the leaders who were present. We continue putting our nation first. #ZambiaFirst,” he wrote.

Hichilema, the United Party for National Development (UPND) candidate, was a former CEO at an accounting firm.

The incoming President faces the task of rebuilding a divided nation and an economy that fell into a deep recession due to the COVID-19 pandemic.

The retired General appealed to Hichilema to be magnanimous and urged Zambians to maintain the dignity Africans are known for.

“Zambia must break the circle of the previous President being disgraced, by being inhumanly treated by the succeeding President”, Obasanjo noted.

Spain: Sadiq Inspires Almeria To Away Win Against Cartagena