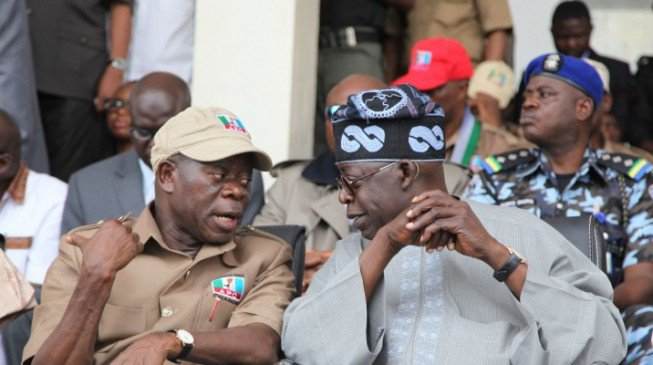 It appears all is not well with the ruling All Progressives Congress (APC) at the moment. The ongoing party’s registration and membership revalidation exercise seems to be ruffling feathers in the broom association.

It is believed that the exercise was targeted at whittling down the influence of some powerful elements in the party.

Pundits say the exercise is capable of bruising the ruling party if not properly handled.

A chieftain of the party, who spoke to BusinessDay on condition of anonymity, confirmed that the crisis in the party was eating “deeper and deeper” with the revalidation exercise.

“If you look at our party, you will see that there are factions in many states. How then does a party be talking about revalidation and registration of new members when your house is not in order?” the party chieftain said.

According to him, “If you are inviting me as a guest to your house; I should be happy to see every member of the family welcoming me cheerfully; not that madam is not in good terms with the husband and the children are shouting and screaming at one another while I am there. It shows the house is not in harmony and a guest cannot have peace in such an environment. That is what is happening with our party now,” he explained.

The ruling party commenced a nationwide revalidation exercise on Tuesday, February 9, 2021 amid rancour.

The exercise is indeed part of the programme of every political party ahead of a major national election. It offers a political party the opportunity to take stock of itself and also enables it to go on new membership drive.

In a country where people switch parties at will, it becomes very necessary for a registered political association to engage in stock taking on a regular basis. This, however, should be within the ambit of its constitution.

Also, in a country where struggle for control of party machinery is intense, such an exercise offers the leadership of the party, particularly, those who have a firm grip of the party and have the ears of the President, in the case of a ruling party like the APC, to whittle down the powers of those considered very powerful and influential in the party.

Speaking with BusinessDay on the need for the ongoing exercise, Abdul-Azeez Olajide Adediran, initiator of the Lagos4Lagos Movement and leader of Team Jandor, a group in Lagos APC, said: The exercise is what is needed to have a total control of the party. We saw a situation where people were printing forms and taking them to the ward level or sharing them among themselves that you should bring this number of people and all of that. But this particular one, we are having it at the polling units; everybody is mobilised to the polling unit to get your own people to register.

“This is just like starting afresh. This time around everybody will be a financial member, not a situation, where one person will be sponsoring everything and doing all sorts of things; and other people will not get money to run for an election. It gives so much power to an individual. You look at it as an intra-party affair, yes, but some people appear so powerful in the party, controlling everything; but the idea today is that the party belongs to all of us; let’s start afresh and see what we can do.”

Also justifying the exercise, Fouad Oki, a strong member of the ruling party, said: “Recall that between 2014 and 2021 there has been a shift of members from other parties to our party and from our party to other parties. The foundational members, a sizable number of them, have left the party and a few others that joined are active. What is the percentage of those who have left and since they left, have we been able to clean the membership register of our party?”

According to Oki, “We have a register where we cannot say those who are financial members, and political associations like this, are run based on contribution of members. So, if somebody says we should do it and suggests to NEC and says let us go on a new membership drive, profiling new members, while old members revalidate, it is a decision in the right direction. And again, there is a need for us to go on reset as the party in power; we are more challenged than any other party.”

The APC is factionalised in almost all the states in the South West geo-political zone; it is shaky in many other states also.

Analysts say the rational thing to do would have been a thorough reconciliation of feuding parties to quell the internal wrangling before the drive for new membership and revalidation exercise.

Some associates of Bola Ahmed Tinubu, the acclaimed national leader of the party, believe the exercise at this time was targeted at some individuals in the party. Tinubu himself has also spoken out against the exercise.

Bisi Akande, the pioneer national chairman of the party, had taken exception to the exercise, tagging it a huge waste.

He also described the caretaker Committee overseeing the affairs of the party under the leadership of Mai Mala Buni, governor of Yobe State, as abnormal.

Although he submitted himself willy-nilly for the exercise, Akande left no one in doubt that he detected ‘monkey hands’ in the programme.

“Please, permit me to make two observations. The first is that in normal circumstances, a Caretaker Executive Committee for a political party is an abnormality. If not carefully controlled and expeditiously managed, most aberrant authorities end up in contempt and disgrace,” he observed.

“The second major perception is that APC leadership might be wasteful and unappreciative of the proper use of money in a kind of scanty economy in which Nigeria now finds itself.”

“These seeming ugly perceptions put into abeyance the applause of the two national election successes that the original APC register enjoyed since its completion on 15th February, 2014 and the over one billion Naira of 2014’s value that the original register cost when APC had no money of its own.”

By the same token, Adams Oshiomhole, the ousted national chairman of the party said the revalidation exercise ran counter to the letters of the party’s constitution.

According to him, “APC is governed by constitution and not by man. The constitution only provides for registration and I registered as a member of the APC in 2014 under the Interim national chairman Chief Bisi Akande.

“There is nothing in the APC constitution that says a member shall revalidate or renew its membership. Once you registered when you joined the party and you have not defected, you are a member. So, revalidation is strange to our constitution.”

Explaining why he yielded himself to participate in the exercise despite his strong misgiving, the former Edo State governor said: “I have only done this because I want peace to reign; but in doing this, we have to be careful not to create constitutional breach.”

Oshiomhole said that between 2015 and 2021, people had left the party and others had joined it, while some died, adding that it made sense to review the register.

“If you ask me as a foundation member who have never decamped to revalidate his membership, it is double registration because there is nothing like revalidation in our constitution.

“By asking me to revalidate my membership means I was not a member when I have never left the party, so I think the correct language should be either reviewing or updating because it makes sense to review voters register due to the new members that have joined or those that have exited.”

A member of the party in Lagos State strongly believes that the exercise is purely targeting at Tinubu because of his touted presidential ambition.

The member, who spoke with BusinessDay, said: “Make no mistake about it, Asiwaju is the target of the exercise. They may be targeting to destroy one man, but they may find out that there is no party at the end of the day. They may succeed in pulling him down, but it may destroy the party. I just advise them to tread softly.”

A group in Kwara State APC chapter, Concerned Youths Stakeholders of the All Progressives Congress (APC), accused the state governor of hijacking the exercise.

John Adegboye, spokesperson of the group, accused Governor AbdulRahman AbdulRazaq, Governor Sani Bello of Niger State and Governor Mai Mala Buni of Yobe State of promoting the crisis in the state chapter of the party.

“We reject the Senator John Danboyi-led seven-man APC membership registration team to Kwara State.Our request is clear, we ask for a reconstitution of the APC Membership Registration Committee for Kwara State,” he said

He also wondered: “Is Alhaji Lai Mohammed, the Honourable Minister of Information, not relevant enough to be accorded the respect of being carried along in the registration exercise in Kwara State?

“Is Senator Gbemisola Saraki, the Honourable Minister of State for Transport, any less relevant than the governor in this party? What about other stakeholders whose sweat and resources brought about the O’toge government?”

Tinubu, who spoke in Lagos on the issue, aligned his thought with Akande’s, saying, “Since we have a foundation and that foundation is on which the structure up till the present was built at the time of the registration of this party, I will not fault Baba Akande’s position; I will not but endorse it.”

He said he hasn’t heard a situation whereby the party’s register submitted to the Independent National Electoral Commission (INEC) at the time of APC registration has been invalidated. He described the party’s exercise as an update and revalidation of all those membership, adding that despite the APC witnessing several congresses and exits, it had complied with the nation’s Electoral Act.

Since last year, there have been unconfirmed reports over the ambition of the national leader of the APC to run for the presidency in 2023.

Although Tinubu has not made public such an ambition, watchers of unfolding political events in the country speak in tandem that his ‘body language’ appears to be dancing that way.

It is strongly believed that it is this body language that may have moved some elements in the party, who are afraid of Tinubu’s intimidating persona in the broom association, as it were, to try “to cut him to size”.