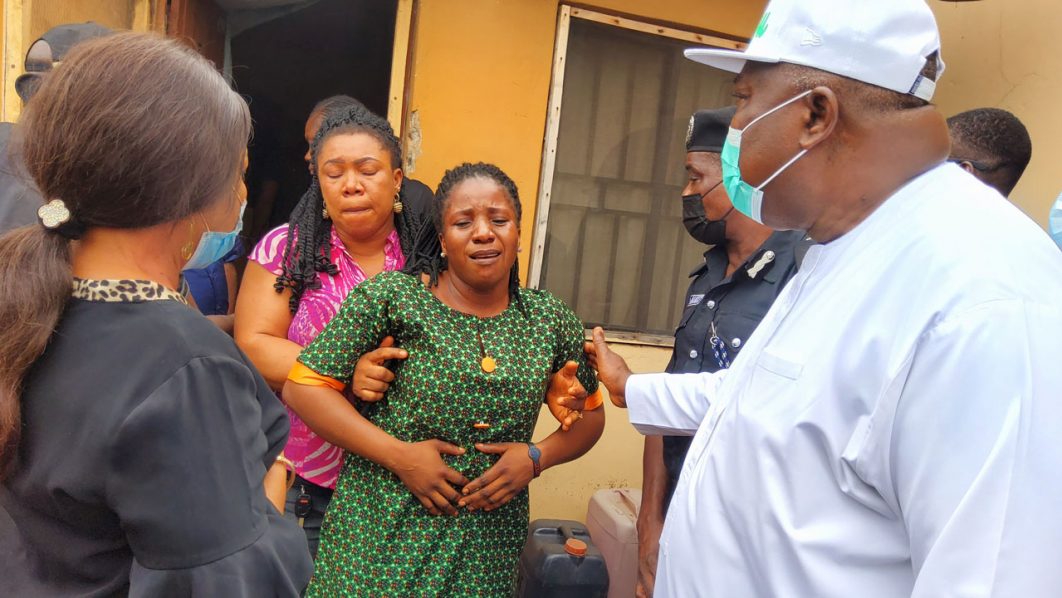 Governor Ifeanyi Ugwuanyi of Enugu State (right) consoling the wife of one of the slain police officers by yet-to-be identified gunmen, Mrs. Janet Okuma (middle), at her residence, at Ugbo Odogwu, off Trans Ekulu, Enugu, Yesterday. With him on the left is the Commissioner for Special Duties, Hon. Mrs. Mabel Agbo.<br />

Gov. Ifeanyi Ugwuanyi of Enugu State has offered automatic employment to widows of the police operatives killed by unidentified gunmen at their duty posts.

Ugwuanyi announced the government’s gesture, when he paid a condolence visit to the bereaved families, also promised to pay three months salary of their late husbands.

He said the widows had an option of scholarships for their children upto the secondary school level or the automatic employment.

Responding on behalf of the two widows, Mrs Janet Okuma, thanked the governor for his kindness by coming to console them, in addition to the employment offer.
Also, the father of one of the deceased, Mr Christian Nnaji, also expressed gratitude to the governor for what he described as “rare gesture”.

The Public Relations Officer of the state Police Command, ASP Daniel Ndukwe, had earlier in a statement issued in the wake of the dastardly act, disclosed that preliminary investigations on the matter had commenced.

The governor was accompanied by a team of senior police officers, including ACP in charge of State Criminal Investigation and Intelligence Department, Mr Fidelis Ogbara.

The News Agency of Nigeria (NAN) reports that Insp. Timothy Tion from Benue and Insp. Emeka Nnaji from Owo in Nkanu Local Government Area were separately shot dead on Wednesday.