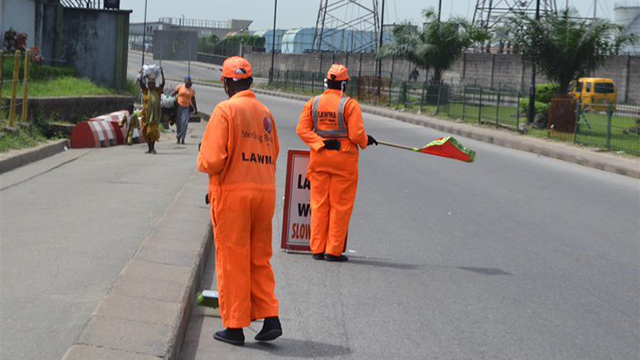 Two female highway sweepers in the employ of the Lagos State Waste Management Authority (LAWMA) were killed in the early hours of yesterday, in Abule-Egba area of the state.

The Guardian learnt the sweepers lost their lives on duty at around 7:00am on the Abule-Egba jubilee bridge when a fast moving vehicle knocked them down at high speed.

Though one of them reportedly died instantly as her head was smashed, the second victim, whose legs were broken, was left to groan without attention, before she was eventually taken to an undisclosed hospital at Ile-Epo, where she later died.

Though the area had been cleared by the time our correspondent got to the scene around 10:00a.m., the accident led to traffic gridlock on the axis, as crowd blocked the bridge and the road inward Oshodi in solidarity with the victims.

The situation nearly turned to pandemonium as both human and vehicular movements were grounded.

Motorists coming from Command-Ekoro road to link up with Agege were at a standstill for over an hour, even those coming from Sango axis did not fare better as some drove against traffic.

Commuters were forced to disembark from vehicles as irate touts nearly caused chaos. Majority of them trekked as far as Super bus stop and beyond to get another vehicle.

An eyewitness, Kikelomo Adeola, told The Guardian the vehicle involved – a mini bus was being pushed by officers of the Lagos State Task Force for taking the BRT lane and in the process of evading arrest he sped off.

She said immediately the accident happened, good Samaritans made calls across to government officials to come to the rescue of the victims despite the fact that one of them died instantly but for hours there was no response, as the other victims wriggle in pain.

The eyewitness revealed that though help later came her way as he was taken to the hospital, she later died at the hospital after losing much blood and the level of the injury she sustained.

Adeola said the late response of government officials to rescue the victims led to the blocking of the express road, which eventually led to heavy traffic jams that lasted for hours.

A police officer, who doesn’t want his name mentioned, confided in The Guardian that the errant driver, who sensed the magnitude of his offence parked his bus at the Awori bus stop and went straight to Oko-Oba Police Station to report himself.

It was learnt that after his report the police went to retrieve the bus, which is currently at their station now.

The Guardian could not get reaction from LAWMA as an official, who promised to call back, did not fulfill his promise at the time of going to press.

BBNaija: I’ll not choose Queen as deputy if I emerge Head of House – Whitemoney