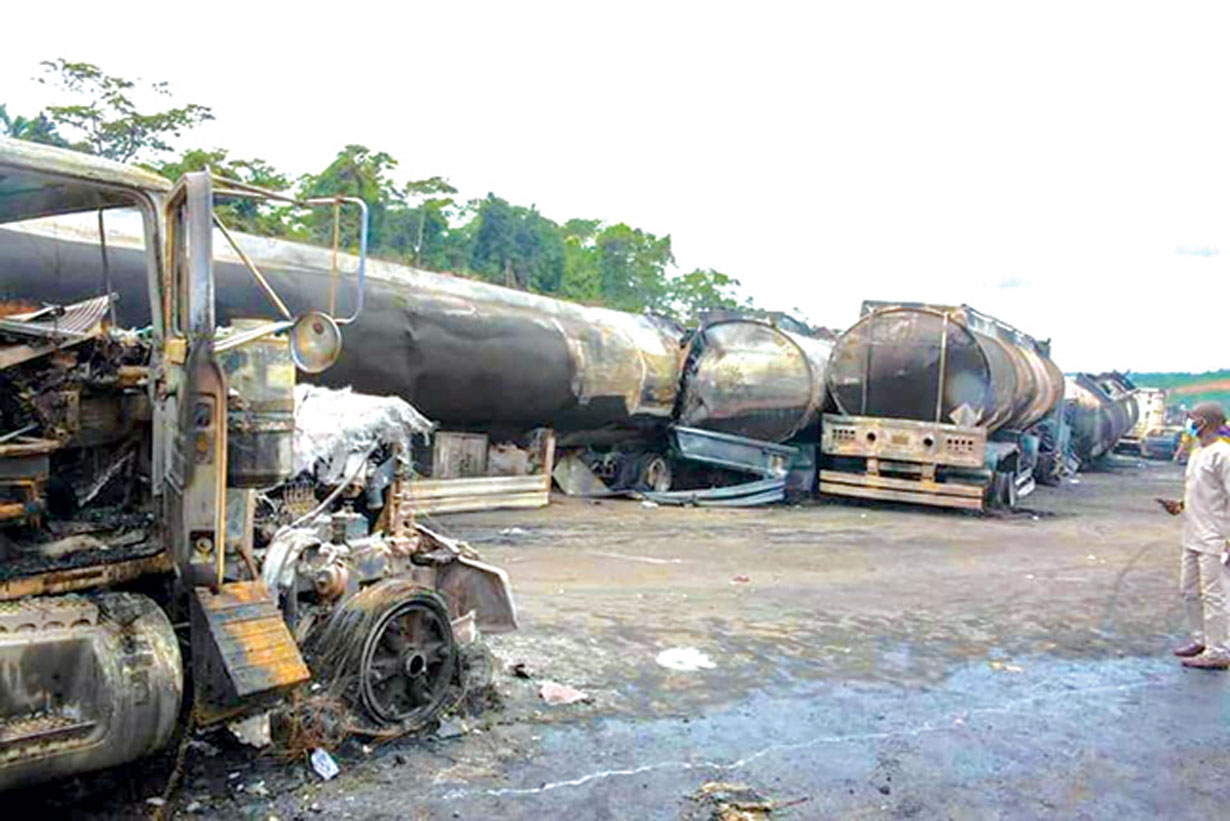 Two persons lost their lives and 13 vehicles were razed yesterday, when a tanker loaded with 33,000 litres of Premium Motor Spirit (PMS), exploded on Lagos-Ibadan Expressway.

It was gathered that the tanker caught fire in the traffic affecting seven other trucks and two cars in the process. The Guardian learnt that the incident, which occurred around 4:00 a.m. at new Kara market, inbound Ibadan, led to a gridlock on the road.

The incident halted construction activities around the area while vehicles heading towards Ibadan were diverted to Sagamu-Iperu-Ode/Remo-Saapade to relink the expressway.

The Public Relations Officer for TRACE Corps, Babatunde Akinbiyi, confirmed the incident in a statement. The statement read: “A case of fire outbreak has been reported along the proposed new Kara Market, inbound Ibadan.

“Around 0400hrs, a fully loaded trailer fell. And in the ensuing gridlock caused by the incident, a tanker laden with fuel, in the hold-up suddenly burst into flames affecting other trucks and two cars in the process.

“While rescue operations continue with the combined efforts of TRACE, FRSC, POLICE NSCDC and the FIRE SERVICE, motorists are advised to ply the alternative routes below.

“While any inconvenience is highly regretted, drivers are implored to please maintain lane discipline so as not to worsen the traffic situation.

“Thanks for your understanding and cooperation.”

Meanwhile, Ogun State Governor, Prince Dapo Abiodun, has pleaded with motorists plying the Lagos-Ibadan Expressway to be patient and cooperate with road safety corps and other security officials to maintain law and order on the road.

The governor, who spoke through his deputy, Noimot Salako-Oyedele, after inspecting damages caused by tanker explosion at the Kara end of the road, expressed sadness over the loss of lives and destruction of properties.

Describing the incident as unfortunate, the governor ordered the immediate evacuation of the burnt vehicles in order to create a thoroughfare and give free access to motorists.

Abiodun also sympathised with those who lost their property in the accident, adding that the contractor handling the road construction has been mandated to find ways of diverting traffic to ease the movement on the road.

The State Government also designated the Permanent Secretary, Ministry of Special Duties, Mr. Kehinde Onasanya, to be the Incident Commander while urging motorists and other road users to take alternative routes, but pleaded with those with no option, to be patient in order to avoid another accident.

Also, the State Commissioner of Police, Mr. Edward Ajogun, said policemen have been deployed to the scene of the accident to ensure that goods that are still intact in the burning trailers are not looted by hoodlums.

The State Sector Commander, Federal Road Safety Commission, Mr. Ahmed Umar, while briefing newsmen on the incident that led to the explosion, said, “at about six o’clock this morning, a tanker loaded with Premium Motor Spirit (PMS), had a brake failure.
In the course of trying to control the vehicle, the driver collided with another tanker which sparked fire instantly.

“The accident led to the death of two people.13 vehicles made up of six tankers, five trailers and two buses, were affected in the inferno,” he explained.