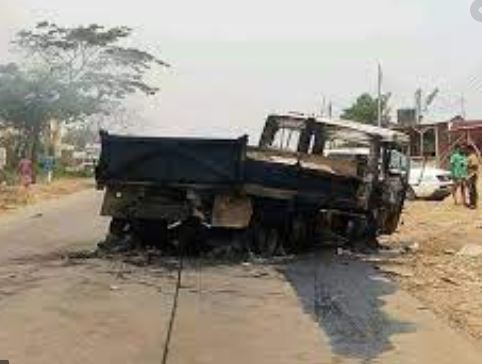 Tragedy struck in Ibadan yesterday as three students of Idito High School, Erunmu, Egbeda Local Government Area of Oyo State and a motorcyclist were crushed to death by a vehicle.

The incident, which led to pandemonium on the Olodo-Iwo Road, paralysed vehicular movement in the axis.

Students of the school and youths in the axis blocked the road to protest the incident.

Eyewitnesses said the students were on the motorcycle when the driver of the vehicle, while attempting to avoid hitting an animal, rammed into them.

The students and the motorcyclist were rescued by residents but died before they could be rushed to hospital.

The incident led to agitation among the youths who decried incessant loss of lives on the highway.

Officers of the Oyo State Police Command, Operation Burst and Amotekun Corps were drafted to the scene to forestall breakdown of law and order in the area.

Chukwurah said: “We were just called for a rescue and by the point my team got there around 8:45AM, we were able to rescue the victims and took them to the hospital.

“Initially, they though the five of them were dead but by the time they got to the hospital, the female among them regained consciousness.”