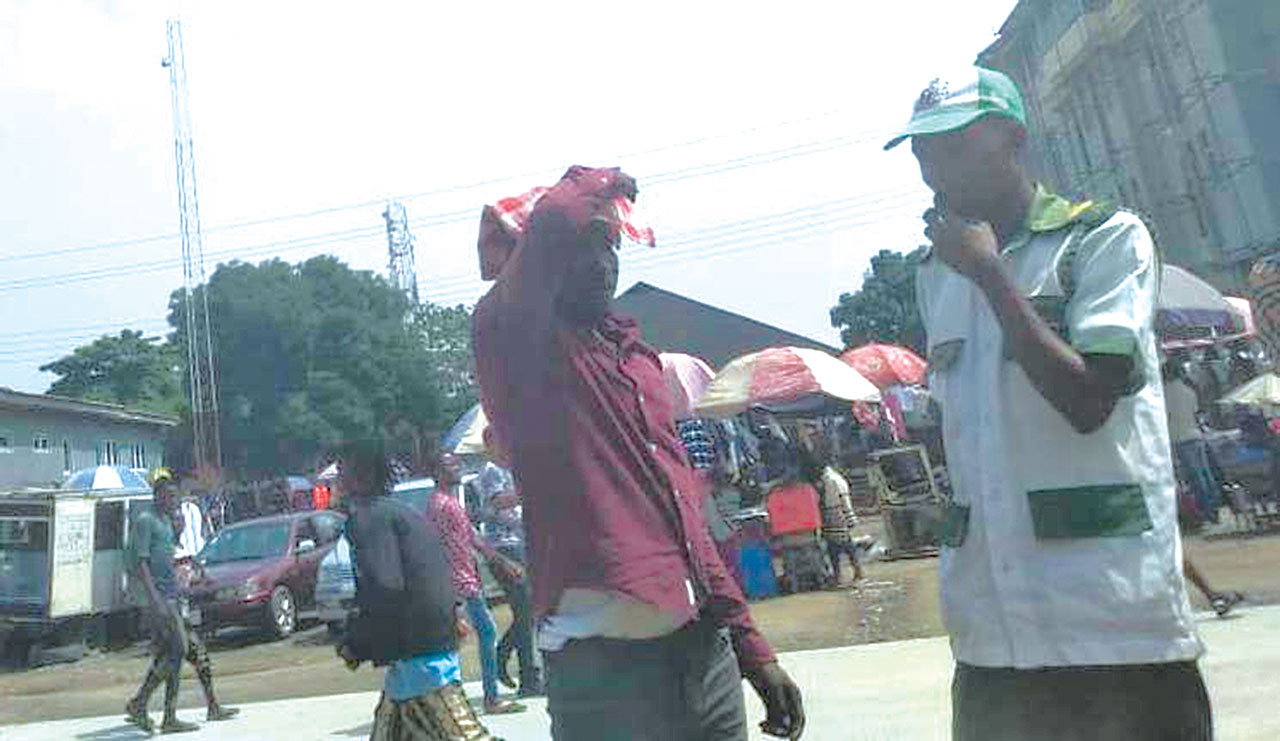 Touts on duty in Oshodi

Originally, agbero is a Yoruba word for a tout who scouts for passengers for commercial drivers and helps to carry luggage at motor parks.

However, they have recently expanded their activities by positioning themselves at bus stops, imposing levies on commercial drivers, tricycles and motorcycle riders.

Armed with a cane or stick sometimes, and in some cases with markers to label and identify buses of drivers they had collected fees from, Agberos use force and extra-judicial tactics to extort money with impunity from commercial drivers and conductors.

Their operations are becoming fiercer in Lagos, at times leading to chaos and deaths as they often operate under the influence of alcohol and drugs, and are usually brutal to bus operators who hesitate to pay levies.

Despite the enactment of the Lagos State Traffic Law on August 3, 2012, which banned their activities at motor parks and bus stops, The Guardian investigation has revealed that touts still operate at bus stops across the metropolis.

Sometimes, they destroy vehicles and obstruct traffic without fear of being challenged by government authorities. They are also ready tools for desperate politicians.

The unruly behaviour of touts terrifies residents and visitors to the mega city.

Since 2012, Agberos have expanded their presence in Lagos and increased prices of tickets and other illegal collections from commercial motorcyclists, tri-cyclists and commercial bus drivers.

Agberos also hide under the umbrella of the National Union of Road Transport Workers (NURTW) to evade arrest whenever the police deem it necessary.

Many hold the view that Agberos are used by politicians during elections, making political leaders lack the will to enforce the ban.

Aided by men of the Nigeria Police Force and Lagos State Traffic Management Authority (LASTMA), agberos, are laws and lawmakers at bus stops across.

It was reported that transport unions operating in Lagos State, make as much as N123.078 billion yearly.

According to a recent report by International Centre for Investigative Reporting (ICIR), the estimate came from what was paid by commercial buses, tricycles and motorbikes operators in the metropolis.

Going by the figure provided by Motorcycle Operators’ Association of Lagos State (MOALS), there are 37,000 commercial motorcycles in Lagos. By implication, motorcycle riders pay N22.2 million to agberos each day, N666 million each month, and N8.103 billion each year.

In total, commercial buses, tricycles and motorcycles pay N123.078 billion to agberos in Lagos each year.

The amount, according to the report, is bigger than the IGR of any other state.

The amount is made through forceful collection of levies, forceful removal of parts of vehicles, and physical assault on drivers and conductors.

In a chat with The Guardian, a member of the NURTW, who preferred not to disclose his identity, said: “May God help us. We are doing this job not to steal or sit at home. At my bus stop, I deliver N8, 000 to the union daily, while the rest of the money is mine. At times, I may not realise up to N8000 and they also reason with us. Market is usually dry during holidays and they understand that.

“Two officers of the NURTW come to the bus stop daily to collect money for food. We went through hell before realising the money, but we can’t do anything. We are family men with wives and children. We also rely on some drivers’ goodwill and they dash us money.”

On the charges, he said: “We charge a driver N300 if he comes to our bus stop empty and from that N300, N200 is for loading while N100 goes to the task force. But we have licence to collect N50 from anyone that picks up to five passengers.”

An okada rider, who identified himself simply as Mohammed, said: “We pay N600 for ticket per day while they charge us N500 weekly and anyone who fails to collect a ticket on time would be charged N2000 before his bike will be released to him.”

A tricycle operator in Oshodi, who does not want his name in print said: “We pay N1,600 for ticket per day.

The police come to the park every weekend to collect their share. We used to pay N1,000 per ticket, but they increased the fee to N1,600.

He added: “A trip used to cost N50 per passenger but we had to increase it to N100 because of the money they collect from us. We also deliver to tricycle owners. We have no other option but to increase the fares. We are not comfortable. We feel cheated but we can’t do anything.

“In Ibadan, Oyo State, after the governor scrutinised the activities of the union and maintained his stand on the union, they started selling tickets to tricycle operators at the rate of N200. Operators can afford to charge a passenger N30 per trip.”

Speaking with The Guardian, a commercial driver, Mr. Babatope Abiodun, said: “Agbero don’t obey laws; they act as if there is no government. Their atrocities in Lagos are too many and there is nobody to check them; that’s why they have free rein; they are just in their own world. They don’t care. Immediately they see us, all they say is ‘Owo mi da’ (Where is my money) as if they gave us money to keep.”

A resident, Andrew Okah, urged the government to enforce its laws.

He argued that government’s failure to enforce the law restraining agberos from parks had remained a major setback, as they have continued to create tension in the metropolis.

But an official of the Ministry of Transportation, when contacted, blamed the police for not enforcing the law.

The official, said he hopes that the new transport programme of the state would naturally phase out yellow buses and reduce activities of touts on Lagos roads.