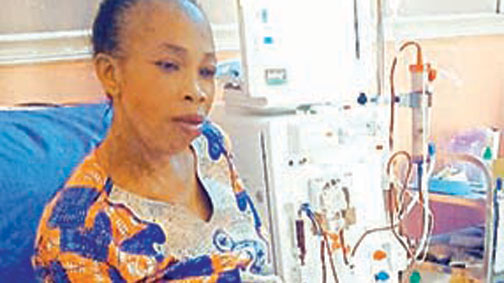 A teacher with a private school in Port Harcourt, Rivers State, Mrs. Violet Oluwayemi, who has been diagnosed with chronic kidney diseases, is currently battling to remain alive, as she seeks N15 million for kidney transplant.

The 48-year-old mother of three, who resides at No. 8, Ejiogu Street, Umuebulu 1 in Etche, and teaches at Solid Step International School, Oyigbo, had tumour of the uterus, which was not treated on time and consequently compromised the two kidneys, leading to their total damage.

Findings by The Guardian showed that the cost of drugs to manage her situation range between N12,000 and N15,000 weekly, in addition to weekly blood transfusion.

Aluku said: “She has a protracted illness and she has been in this hospital for over one month. She has a complicated kidney problem and also a tumour of the uterus, which she did not treat in time and consequently compromised the two kidneys. The two kidneys are gone and she is doing dialysis regularly.

“On our own, we have done the little we can. I just gave the husband N100,000 to do two dialysis as part of our own support.

“One dialysis costs almost N50,000. Due to the huge finances required to manage this, the husband looks drained; they need support, as she requires surgery to remove the two damaged kidneys and have them replaced to enable her to live.”

Violet said: “The finance has been something else, because every week, we spend about over N60,000 and sometimes, we keep borrowing and begging. It has not been easy.

“That’s why I am appealing to Nigerians, all well-meaning people to please assist me live again. The doctors said the possible solution is to go for kidney transplant and we have located a hospital in Abuja and they said it will need about N15 million to remove the damaged kidneys and replace with at least new one.”

Her husband, Pastor Emmanuel Oluwayemi, said: “She has been in the hospital since January this year. At one point, I had to ask them to discharge her because I couldn’t fund her treatment again. I was financially exhausted, so I asked them to release her.”

He appealed to Nigerians to come to their aid to make Violet remain alive. He can be reached on 07038285929, while donations could be made to: Violet Oluwayemi, Zenith Bank, Account Number: 2002551676.