Southern governors’ decisions on open grazing, others are irrevocable—Wike 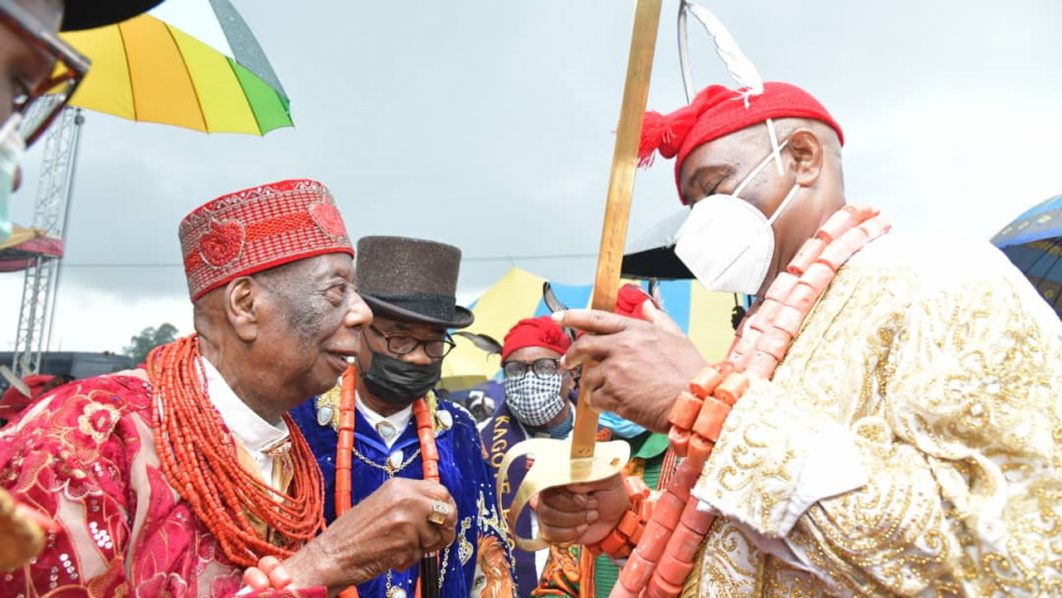 Rivers State Governor, Nyesom Ezenwo Wike (right) being conferred with the title, Mene Kwalenu 1st of Ogoni (a benevolent king), by the President, Supreme Council of Ogoni Traditional Rulers, His Royal Majesty, King G.N.K Giniwa, during a grand reception in honour of the governor in Bori, yesterday<br />

Rivers State Governor, Nyesom Wike, has said the Southern Governors Forum decision on open grazing and other issues is irrevocable and must be respected.

He said those opposed to the resolutions taken by the governors in Asaba, Delta State, should realise that no section of the country is inferior to others.

Wike stated this during a grand reception held in his honour by Ogoni nationality in Bori, Khana Local Council.

The governor declared that he has taken further steps to fulfil the resolutions reached by Southern Governors in Asaba.

“We have taken a position and there is no going back. Enough is enough. We are not second-class citizens of this country. We also own this country.”

Wike promised to identify with the Ogoni ethnic nationality, vowing to floor the All Progressives Congress (APC) in the state come 2023. The governor assured that all stakeholders would sit together to discuss who would become the next governor of the state.

The event, witnessed by a mammoth crowd, was graced by top Ogoni political leaders, academics, professionals, traditional rulers, clergymen, activists, women, youths, elderly and children. There was also no party line, as both members of Peoples Democratic Party (PDP) and All Progressives Congress (APC), except those loyal to the Minister of Transportation, Chibuike Amaechi, attended the occasion.

Some of the dignitaries include Senator Magnus Abe; Senator representing Rivers South-East, Sen Barry Mpigi; Senator Lee Maeba, former President of the Movement for the Survival of Ogoni People (MOSOP) Ledum Mitee, the Chairman of Ogoni Traditional Rulers, King G.N Gininwa, Igo Aguma, and Celestine Omehia, among others.
MEANWHILE, Wike has announced a relaxation of the curfew in Obio-Akpor and Port Harcourt Local Council as well as Port Harcourt International Airport from 8:30 pm to 6 am beginning from Sunday.

Wike said: “Thank heavens, those responsible for the premeditated ambushes and murders of security personnel in the state have been apprehended and are now facing the bitter venom of our laws, as none that is proven to be criminally liable will escape the fury and crushing impact of justice.

“We wish to reassure every citizen and resident that we are able, willing and ready to act directly and decisively, and at any time, with the full weight of our government to forestall every security threat to our state from any person, group or quarters.”

He explained that after yet another review of the prevailing security situation and in particular, the effect of the curfew on citizens, the state security council has decided to relax the curfew a little for Obio/Akpor and Port Harcourt Local Councils, as well as the Port Harcourt International Airport.

“Consequently, the current nighttime curfew in Port Harcourt and Obio/Akpor Local Council will now be from 8.30 p.m. to 6.00 a.m. from Sunday, May 16, 2021, while the starting and closing time-frame of 7.00 p.m. to 6.00 a.m. still continue to apply to the prevailing curfew in the rest of the 21 local councils in the state until further notice.

Also speaking at the reception for him, Wike said: “I will identify with the Ogoni people, I will continue to identify with you. Let’s join hands and fight together, fight insecurity, fight the enemies. I have had a good relationship with the Ogonis, but we need to work together to sustain the peace, but most importantly, obey the curfew.

“All of us will sit down and tell ourselves the truth. The only problem I have with Magnus Abe is that he will not be there when we will discuss it because he does not belong here, they will query him when he gets back. We all need to discuss, disagree and agree, is that not politics?  We will flog them again in the next election.”

He described the reception as a good one for him and his administration, pointing out that Ogoni sons stood by him when he was growing up in his early political career.

He said: “ Nobody owns this state, it belongs to all of us, there is nobody that is a first-class citizen and others second class

“We will pepper them by the time I finish with the Ogoni people, they will not have a mouth to say anything again to the Ogonis.”

The governor, however, urged the Hydrocarbon Pollution Remediation Project, (HYPREP) to relocate its office to Ogoni, stating that the agency cannot be cleaning up Ogoniland and stay outside the area.

He said HYPREP needs to stay close to the people to enable it to feel their pains and be spurred to urgently implement the United Nations Environment Programme (UNEP) report.

While assuring the Ogonis adequate power supply, he charged them to forget about the past, work towards peace, capitalise on their strength and build a united front.

He canvassed for politics without bitterness, where the people can work together to achieve things that will help them develop.

He said: “I am here today because I know that my presence will make you (Wike) happy and make my people happy. We have gathered to thank Wike for what he has done for us and the respect he has for us. Wike is not just a friend, but a brother, we thank him for giving Ogonis opportunities”

President of KAGOTE, Emma Deeyaah, spearheaded the event and commended Wike for recovering the Ogoni stolen oil wells and dualising their roads.

On his part, the Senator representing Rivers South-East, Mpigi, apologised to Governor Wike for the role he played in APC in 2015.

“The occasion is very unique because you’re a unique governor. On behalf of those who did not believe in you in 2015, we are sorry for the role we played and what we did to you in 2015

“That was why in 2019, we tried to cover up our mistakes. We thank you for what you have done for Ogoniland, particularly the Saakpenwa-Bori Road,” he said.

Also, Maeba noted that having Wike means that the Ogonis now have a warrior that can fight for them. He commended the governor for eliminating the Riverine, Upland dichotomy.