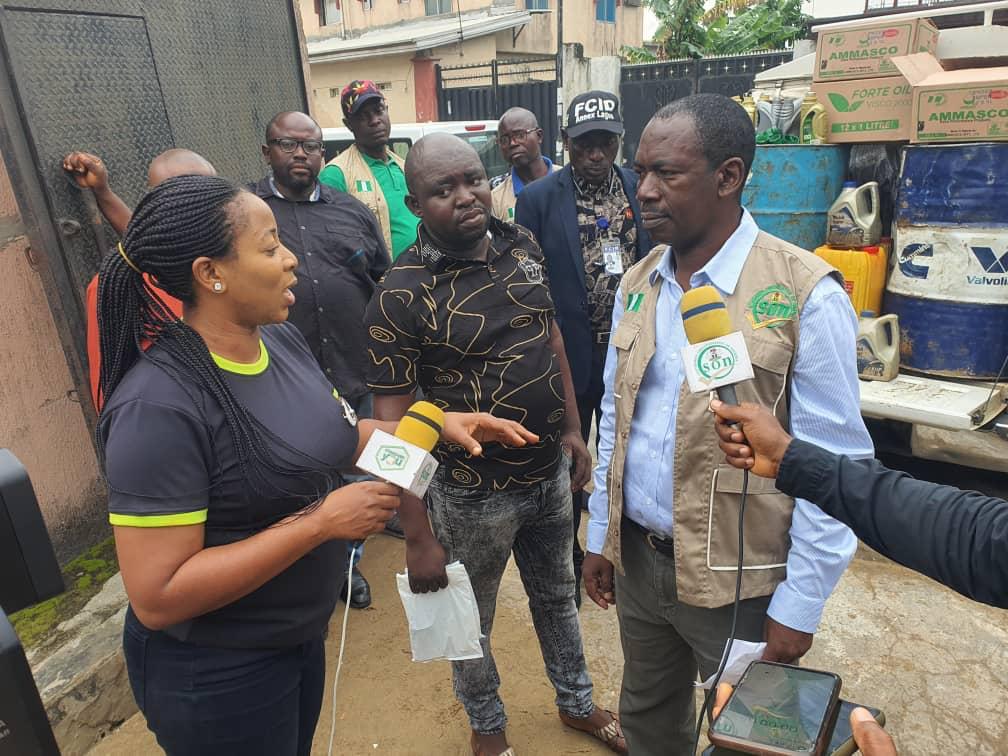 A team of the Surveillance, Investigation and Monitoring (SIM), Unit of SON has uncovered a lubricant adulterating syndicate at a residential property situated at number 25 Isoko Street, Sunny Bus-stop, Ojo in the Alaba International Market area of Lagos State.

Officials of the organisation swooped on the location and arrested a primary suspect Mr Chizoba Emmanuel, who was found on the premises with various drums of base oil and empty drums used to mix and repackage the substandard lubricants.

Speaking to newsmen at the location, Director General of SON, Mallam Farouk Salim, who was represented by the coordinator SIM Unit, Mr. Suleiman Isa described the discovery as shocking, stating that it is indeed a wake-up call for Nigerians and particularly the organisation that there is still work to be done.

According to him, despite SON’s several arrests in the past, deviant Nigerians still persist in the act of adulterating engine oil and selling to unsuspecting Nigerians.

“SON will not relent in the ongoing fight against unscrupulous elements who persist in defrauding unsuspecting Nigerians through their dubious acts,” he said.

The SON boss thereafter advised importers and local manufacturers to always do the right thing by upholding standards in all their undertakings, stating that it will ensure a vibrant economy through the strengthening of businesses by ensuring adherence to international best practices.

The DG, SON further assured that the Organisation will continue to intensify efforts to apprehend criminals perpetrating such acts through discreet information gathering and arrests.

He said these will go a long way in ensuring that the country is rid of substandard products.

Salim, therefore, called on Nigerians to come up with useful information in supporting the battle against substandard products by reporting to SON any unwholesome manufacturing practices.

The SIM team carried out the operation alongside men of the Criminal Investigation Department (CID) of the Nigerian Police Force who apprehended the suspects caught in possession of used lubricant plastics, several cartons of two popular brands of engine oil and a repackaging machine.

The culprits are currently in custody until further investigations are concluded.