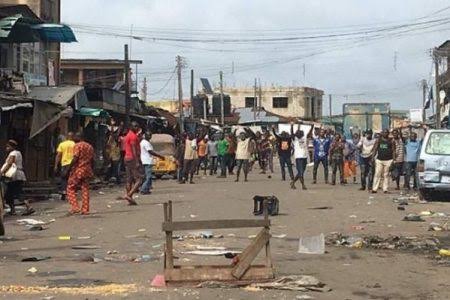 Six persons were reportedly killed in a gang war between youths of Inalende, Abebi and Oopo areas of Ibadan, Oyo State on Thursday night.

The clash came on the heels of the mayhem on Iwo Road on Wednesday in which one Rahmon was killed when shop owners and members of the Park Management System (PMS) engaged in free for all.

The three streets adjoin one another in the heart of Ibadan, the Oyo State capital.

A source in the area, who gave the names of the first two victims as Transformer and Ishaja, disclosed that the two were killed on Thursday while four others whose identities were yet to be established at press time, were killed midnight Thursday/Friday.

The source, who said that the youths regularly clashed in the affected areas, disclosed that some of them were vowing to retaliate the killing of members of their gangs despite the heavy presence of security personnel in the areas.

He said four boys were killed before Friday morning. “I am confirming it. I don’t want you to mention my name. The two boys were killed on Thursday while another four were killed overnight. As I speak to you, police and NSCDC officers are here to maintain peace but those guys are still threatening to retaliate. I wish the police can still reinforce to our area to ensure more lives are not lost.”

Meanwhile, the National Union of Road Transport Workers (NURTW) in Oyo State has cautioned Governor Seyi Makinde against blaming the union for the mayhem.

In a statement, yesterday, Deputy General Secretary of the union, Alhaji Suleiman Musa, expressed shock over reports linking the union with violence.

The union said Governor Makinde should accept his shortcomings for allegedly appointing a personality with questionable character to head the PMS.