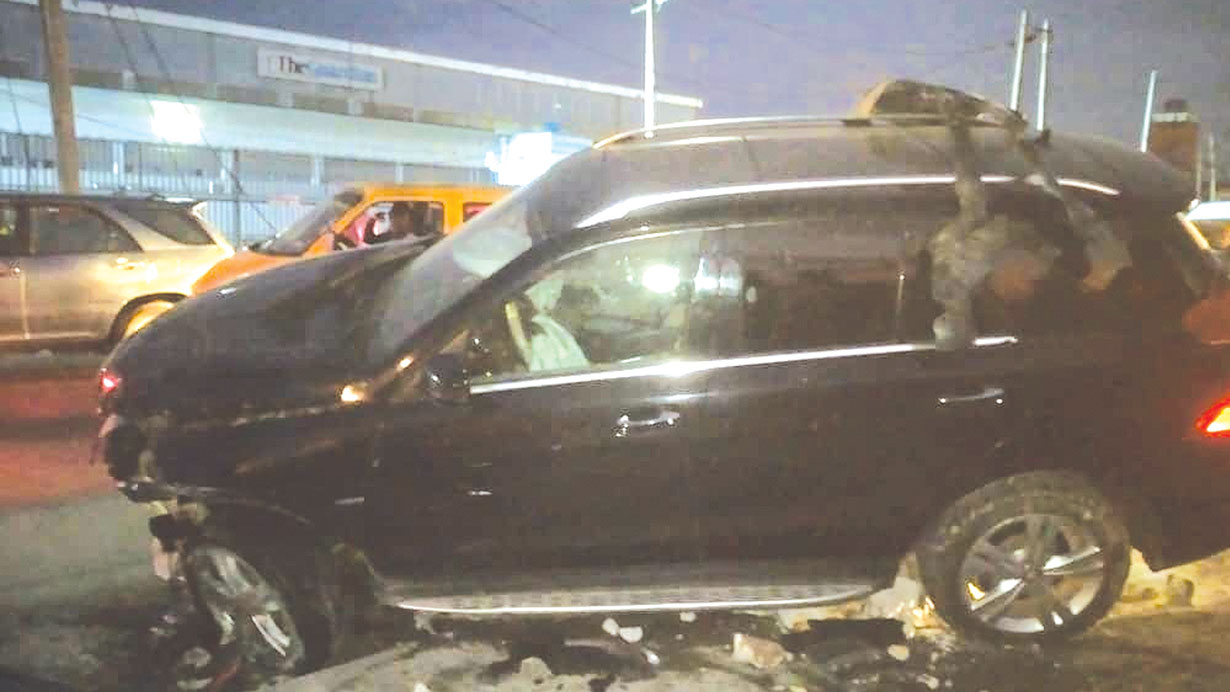 Scene of the accident PHOTO:ENIOLA DANIEL

It was a near death experience for a septuagenarian, Mr. Sumonu Jimoh, and his friend, when his  Mercedes Benz Formatic Jeep, with  registration number, Lagos LSD 660 FS, rammed into barriers at construction site near

Rutam House, the  headquarters of The Guardian Newspapers at Toyota Bus Stop, Apapa-Oshodi Expressway on Sunday.

Jimoh and his friend were returning from an outing when the accident occurred about 7:30p.m.  While Jimoh, who drove the car, had a minor injury, his friend was unhurt.

Eyewitnesses blamed the accident on failure of both Lagos State Traffic Management Authority (LASTMA) and the contractor handling the repair of the Muritala Mohammed flyover bridge, Plycom Nigeria Ltd, to display warning signs indicating road closure, 500 metres away from the construction site.

The accident was similar to the multiple accidents in front of The Guardian on Saturday. Saturday’s accident involved a commercial bus popularly known as Danfo, two private cars and a 40ft container truck with registration number, Ogun JBD 393 XZ, that rammed into The Guardian’s gate.

Meanwhile, the road has partially been opened for vehicular movement. It was reopened about 10a.m. yesterday but some of the barriers were left on the road.

Federal Controller of Works in Lagos, Olukayode Popoola, had said traffic on Apakun axis on Oshodi Expressway would be diverted to Ladipo service lane and airport road for three days starting from midnight on Friday August 13, adding that repair works on the bridge will begin August 16, 2021, with traffic diversion around the construction zone to enable contractor jerk up the damaged Muritala Mohammed Airport Road link bridge.