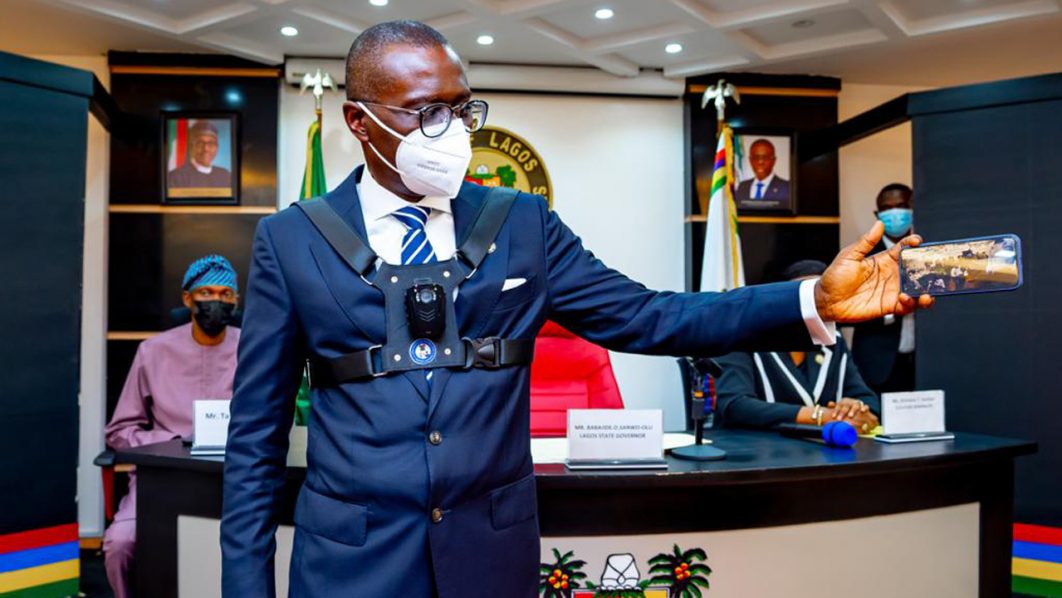 Lagos State Governor, Mr Babajide Sanwo-Olu demonstrating the use of the body-worn cameras for the officers of state’s Law Enforcement outfits during the launch at the Banquet Hall, Lagos House, Alausa, Ikeja, on Wednesday, March 31, 2021. Photo: TWITTER/JIDESANWOOLU

Sanwo-Olu said during the unveiling ceremony, at Lagos House, Ikeja, that the use of the cameras would improve transparency and accountability in the activities of law enforcement agencies.

He said that the devices would help to put the state government in a better position to respond to security challenges in real-time.

The governor also approved a mass training for the state’s law enforcement personnel on the use of body-worn cameras, ahead of the deployment of digital tools for security operations across the state.

The three-day training, to begin in May, will be facilitated by the Lagos State Law Enforcement Training Institute (LETI), headed by Prince Falade Oyekan.

After the training, all state-funded law enforcement officers would be inaugurated to wear body cameras for their operations.

According to Sanwo-Olu, provision of adequate security is a key pillar of the administration’s T.H.E.M.E.S. agenda, and the initiative reflects government’s resolution to ensure Lagos remains secure for residents and investors.

”I am pleased to inaugurate the use of body-worn cameras by law enforcement officers in Lagos and this is a groundbreaking move to enhance safety in the state, as well as increase transparency and accountability in the activities of our law enforcement agencies.

”Lagos State has strategically set the pace among other states in Nigeria to launch the use of body-worn cameras by law enforcement officers.

”The security challenges in different parts of the country are worrisome, but with proactive action, the use of modern technological tools, and a mix of well-trained and intelligent officers, we will successfully combat many of these challenges.

”With body-worn cameras, our law enforcement officers are better equipped to protect lives and properties, thereby, making Lagos safer for us all,” he said.

Sanwo-Olu said that the launch of the body-worn cameras would take the government a step closer towards fulfilling its security agenda.

He said that the introduction of the devices to frontline security team and officers would enhance their productivity and professionalism, while also fast-tracking law enforcement process.

The governor said that the cameras would help the state government to check abuse of power and excesses by security personnel, and the devices would be used for evidence sharing and intelligence gathering.

”I am hopeful that all officers will optimise the cameras that will be assigned to them for the furtherance of justice and improvement of the law enforcement process.

”Our government will continue to prioritise the welfare of our law enforcement officers whose pivotal efforts we acknowledge in the entrenchment of a safe city,” Sanwo-Olu said.

The Permanent Secretary, Ministry of Justice, Ms Khadijat Shittabey commended the governor for approving the initiative.

She said that the body-worn cameras would help the ministry in the administration of justice.

”The cameras will also help to enhance professionalism on the part of the law enforcement agents, provide digital evidence of events and provide additional means of protection for officers.

”The cameras will be used to establish guilt or innocence of officers when confronted with allegations of wrongdoing,” Shittabey said.

The head of LETI, Oyekan, after demonstrating the operation of the camera before the governor, said that 7,000 officers would be trained in the Lagos State Traffic Management Authority (LASTMA) and other agencies.

LETI was established in 2013 through an Executive Order to set standards for recruitment of law enforcement agents, training and development of the officers.