For providence and early intervention of passersby, Mrs. Gladys Anichebe, who narrowly escaped falling into a manhole at Alapere Bus stop, Ketu area of Lagos State, would have recorded a bleak Christmas.

The mother of two and resident at Ketu was rushing to catch a bus to the Island last week, without realising the presence of an uncovered manhole at the bus stop.

Luck, however, smiled at her, a good Samaritan, who watched her movement deftly shoved her aside and prevented her from falling inside the hole.

Similarly, on Thursday, a man narrowly escaped falling inside an uncovered manhole off Akinhanmi Street in  Surulere, Lagos. 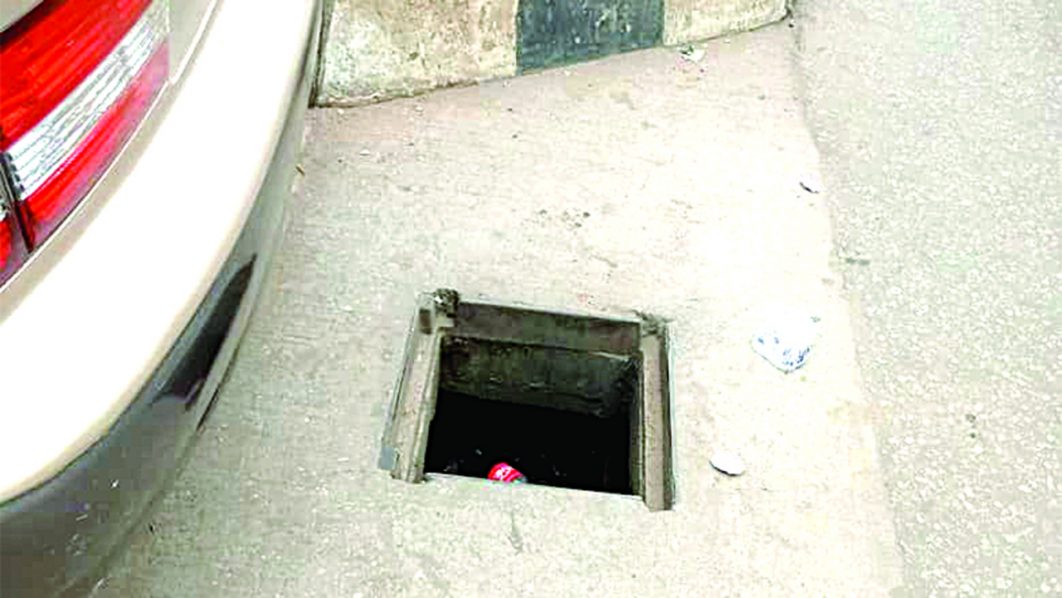 The man was walking towards Ojuelegba from Akinhanmi Street, oblivious of an uncovered manhole on the newly constructed road.

It took a timely shout from a mama put, a (woman selling food) nearby to avert what could have been a calamitous situation.

While Mrs. Anichebe and the man were lucky to escape unhurt, it was not so for many Lagos residents, who have either broken legs or suffered severe injuries as a result of falling into uncovered manholes.

The incidents are more prevalent during the rainy season when roads in the metropolis are often flooded.

Residents are yet to come to terms with the death of Adewura Bello, a promising young Accountant, who met her untimely death in a manhole accident on Lagos road.

The 26-year old was found in a canal after falling inside a manhole.

She boarded a bus heading to Egbeda from Ikeja on May 15, 2019, and had spoken to a family member, when she got to the Cement bus stop and since then, no one heard from her.

She was washed away by floodwater through a manhole shortly after the motorcyclist carrying her was advised not to proceed.

A resident, Onyeka Udeh, who witnessed the averted incident at  Ojuelegba, wondered why the government is still treating the issue of manholes with levity even when the death of the young lady is still fresh in the memories of Lagos residents.

According to him,  it is difficult to understand why manholes still dot roads in Lagos.

Also, another resident at Ikosi, Ketu, Olubunmi Alao said: “At Ketu bus stop in Lagos State, there is a very dangerous manhole by the junction of Ketu – Ikosi road, which is wide enough to swallow a tricycle.
“Whenever it rains, the rush of water through the manhole can move a car with speed.

“There are open drains covered with weak wooden planks and broken concretes at different parts of Ketu – Ikosi road.

“The drainage beside the Ketu market is another snare whether there is rainfall or not.”

The same is the case at Alapere, Ojodu-Berger and  Alausa Ikeja, just in front of Lagos State Secretariat, where there is the presence of big uncovered manholes.

The Guardian learnt that refuse cart pushers popularly called “BOLAR” used to steal the iron covers for the manholes.

A resident, Johnson Udeh, said these covers were often sold for other uses without considering that open manholes can cause harm to pedestrians, cars and other road users.

Udeh also narrated how an open manhole burst his tyre last year and caused his car to somersault of which he survived by God’s grace.

He called on government and road traffic monitoring agencies to take stock of all the open and dangerous manholes in the state to replace them with welded or screwed iron covers or better still, with concrete covers.

He also wants the government to compel construction companies working on Lagos roads to switch to concrete manhole covers.

Another resident,  Salatu Nurudeen, called on the Lagos State government to utilise the dry season to cover open manholes that dot Lagos roads.

She noted that many residents have resorted to using disused tyres as preventive measures, which often block water channels and affect the free flow of drains during the rainy season.

But an official of the Lagos State Ministry of Works and Infrastructure said the ministry is reacting to the challenge by redesigning manhole covers to make them unattractive to those who will want to steal them.

According to him, the ministry is researching for materials that cannot easily be recycled so that it will be a disincentive for those picking them.