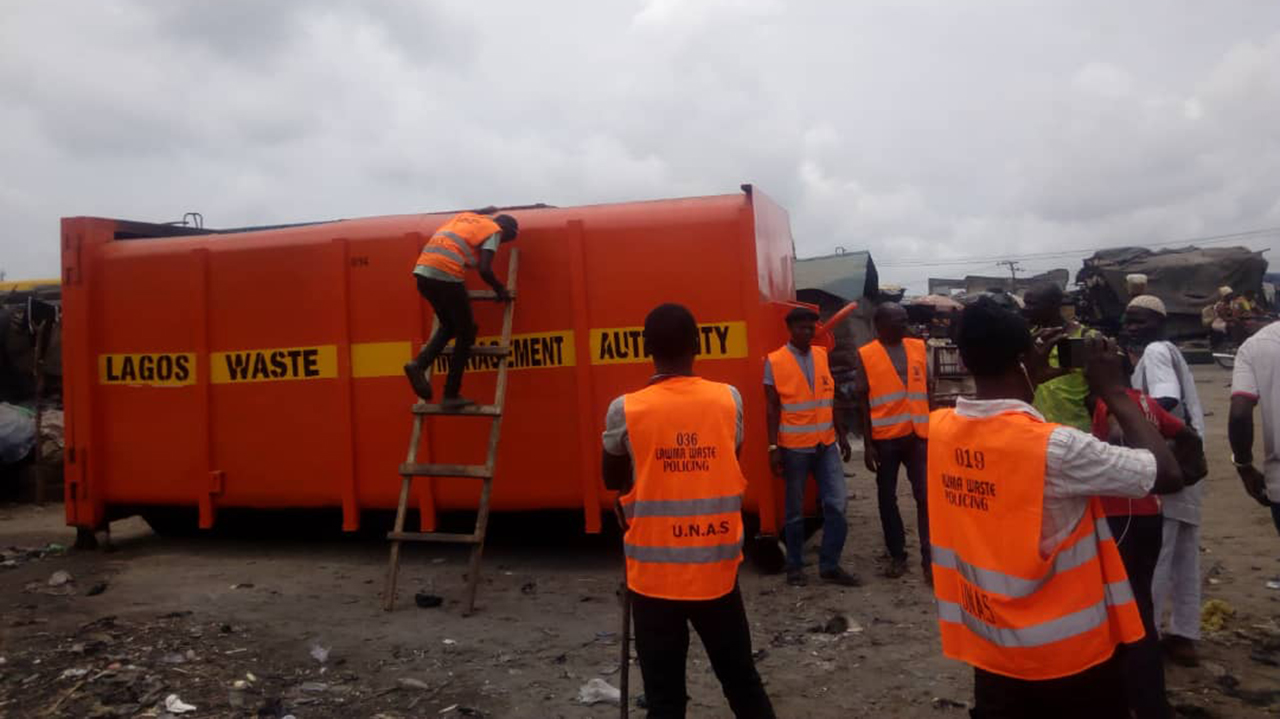 There are concerns over resurgence of waste on major roads and medians in Lagos metropolis. With various initiatives by Lagos State Government, residents had thought the days of refuse heaps were gone.

These included the incorporation of the Private Sector Participation, PSP, operators to collect and dispose refuse on behalf of residents, introduction of highway managers by Lagos Waste Management Authority (LAWMA), to sweep highways and the ban of cart pushers, to ensure proper disposal of refuse in the state.

However, the city is fast descending to its old ways as it is not uncommon to see heaps of refuse dotting major highways, markets and open places, thereby making nonsense efforts at making Lagos a clean city.

For instance, a trip to Apapa last week, revealed the ugly sight of refuse heaps in locations such as the popular Cele Bus-Stop, Ijesha Bus-Stop, Mile 2 and Otto Wharf.

These heaps of refuse are usually found on the median of the dual carriageway. Refuse dumps are also a common sight at different spots on the Lagos/Badagry Expressway, particularly the Okokomaiko stretch as well as Jakande Low Cost Housing Estate, Mile 2, Ojuelegba, Boundary in Ajegunle area of Lagos, Isolo, LASU/Iba Road, Alaba International Market, Ikotun and Makoko areas of the city.

In most cases, it is observed that refuse heaps were left uncleared for several days. There were also heaps of refuse on roads, especially places near markets in the areas visited last week. Worst hit are   Ikorodu, Mile 2, Airport roads, Agege, Pen  Cinema , Orile,  Mushin,  Mile 12 and  Ikotun.

There are also beggars, who are feed by good Samaritans, but drop the left overs  on roads and gutters around. A resident, Mutiu Abayomi, said: “We want government to turn their searchlight to the Alesh Hotel areas under the newly created pedestrian by Ilaje bus stop.”

A parent, Mr. Kewe Joshua, advised governments to employ idling youths to be engaged in meaningful livelihood and to reduce crime, violence and cultism.

But the  Managing Director and Chief Executive Officer of the Lagos Waste Management Authority (LAWMA).  Mr. Ibrahim Odumboni, said the situation is being brought under control. He  said  LAWMA sweepers are cleaning the roads from 8:00p.m. to 4:00a.m. but commuting and traffic were affecting the evacuation of refuse, leading to a  resurgence of waste in streets.
Odumboni  said the agency would be taking delivery of 100 bins  and 102 trucks to facilitate its operations.

He stressed that traffic has impacted negatively on its evacuation drive as a lot of waste could not be evacuated especially within the Apapa area because of traffic bottlenecks. Odumboni, also frowned on the attitude of motorists , who litter the roads by throwing things outside the cars.

LAWMA  operatives and Kick Against Indiscipline (KAI) Brigade, he said,  are now being mobilised to arrest people and put defaulters  through Mobile courts  for trafficking waste.

He said: “ Government is commissioning new  trucks for us which will simplify our work.   We are going to have more vehicles to cater for waste. The problem is temporary and will be resolved soon.”

The LAWMA boss said the agency has embarked on advocacy  to change the behaviour of residents, who often litter the roads by throwing refuse from their car windows.

He appealed to residents to stop throwing things out  of the windows  and ensure they have  bins inside their cars. He complained   that people migrating from different areas bring waste  through  what is called waste migration to dump them on the median or  where they know that LAWMA packs every time

MEANWHILE,  Lagos State  Government  at the weekend, unveiled  an online application known as “Citi Monitor” for monitoring and reporting all environmental infractions.

Launching the app named  “CitiMonitor Application and Enterprise Environmental Monitoring Infrastructure Information System (EEMIIS)”  at Alausa, Commissioner for the Environment and Water Resources, Tunji Bello, said  it would give government a wider reach in monitoring and responding to environmental issues reported by residents.

“This app will maximise the reach of the government, using the large population of Lagos, it will get to the nooks and crannies and it will help us to better report the state of the environment from blockage of our canals, to indiscriminate waste dumping and every other infractions,” he said.

Tunji Bello, who was represented by the Permanent Secretary, Office of Environmental Services, Mrs. Belinda Odeneye, explained that the application, which the state government had been test-running for sometime, was now available for download on Google Play Store and Apple IOS Store.

He added that there are complaints and reports of infractions on daily basis on flooding, damaged roads, dilapidated buildings, illegal petrol stations, security violations, unlawful human activities, vehicle traffic situations, abandoned vehicles and other environmentally related issues that are under-reported or not reported at all in the state.

Bello encouraged residents to avail themselves of the opportunity of downloading the App as it is clear that it would help them take ownership of the environment of the state as citizens are primary custodians.

He said residents could still make use of WhatsApp, text messages and other means to also report environmental infractions.
The software developer, Mr. Ayodeji Faniran, said “Citi Monitor” became necessary in line with emerging trends, especially in the utilisation of science and technology.

He explained that one of the unique features of the app is that it is configured to capture real-time images within the Lagos geographical locations only.

He added that plans were under way to introduce other languages, especially the Yoruba language to enable more residents of Lagos to use the App which is currently configured in English language.