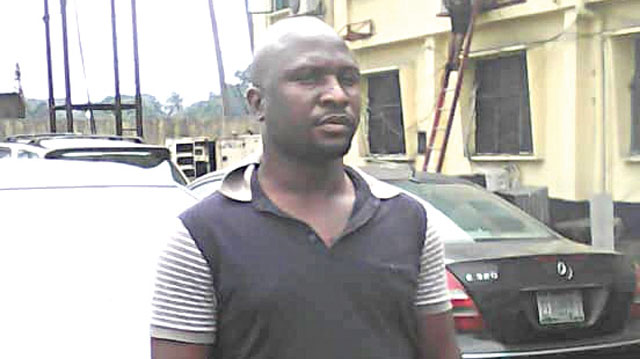 A father of four, Belema Ibama, who specialised in drugging and raping young ladies after luring them through social media, has been arrested by the Rivers State Police Command.

The spokesman of Rivers State Police Command, Nnamdi Omoni, while parading the suspect yesterday at the command’s headquarters in Moscow Road, Port Harcourt, said, he lured his female victims on social media with promises, and allegedly drugged them after, after which he raped them and carted away their belongings.

Omoni said the suspect was arrested when he was spotted at a popular supermarket at Ada George, Port Harcourt, by one of his recent victims who raised the alarm that attracted passersby who apprehended him and handed him over to the police.

Omoni revealed that his mode of operation was the same with serial killer, Gracious David-West, who has been sentenced to life imprisonment. He, however, noted that the only difference was that Ibama did not kill his victims.

According to Omoni, “The command has deployed technical intelligence to recover the items he carted from the ladies while investigation is ongoing”

Some of the victims who spoke to newsmen explained that after days of chatting with him on social media, he booked a date with them in a hotel, where he drugged their food and after they consumed the meal, they fell asleep only to wake up to discover that he slept with them and made away with all their belongings.

Two of the victims revealed that he transferred N135,000 and N185,000 respectively from their phones.
Meanwhile, the suspect Ibama denied the allegations, saying that his sexual affair with one of them named Blessing was with her consent, claiming she charged N20,000 to make love with her.

The suspect disclosed that after they ate and had sex, the lady slept off and he left her without paying her the agreed money. He denied stealing any of their belongings.