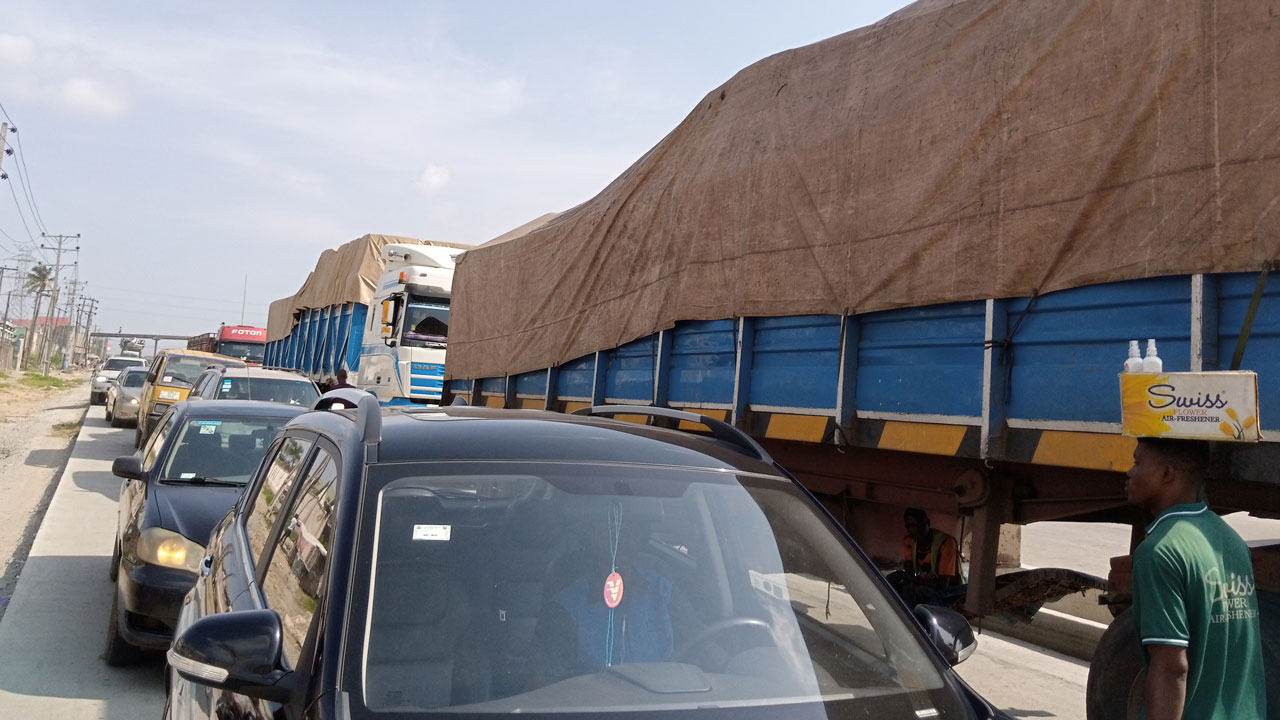 Traffic as a result of parked trucks

It was nightmarish yesterday, as motorists and commuters contend for space with trucks parked along the newly constructed service lane between Ilasama and Toyota Bus Stops along Apapa- Oshodi Expressway.

The situation resulted in gridlock that lasted for many motorists around Isolo, Ilasa, Five Star and Toyota Bus Stops trapped in traffic.

Consequently, businesses have continued to suffer, while commuting has become a herculean task. Apart from losses in man-hour on traffic, the activities of the trucks parked for long hours are imparting negatively on the road.

The gridlock does not only affect vehicles and motorists going towards Toyota Bus Stop, road users trying to access offices along the route are trapped on one spot for hours.

The situation is compounded by the spill over of commercial activities at the Toyota auto spare parts market to the service lane, where container-laden trucks are parked waiting for their content to be offloaded right on the road.

Trucks are seen parked from Ilasa, Iyana Isolo, and Five Star down to Toyota Bus Stop, obstructing traffic while the trucks have damaged portions of the newly constructed road.

Some of the drivers told The Guardian that companies along the axis owned the trucks on the axis. One of them, who gave his name simply as Aina, said they always remain on the road till the companies give them passage to drive in and offload.

Another one, who spoke in confidence, said the situation would continue because no parking lots were provided for trucks. But a motorist, Jude Umeh said, indiscriminate parking on the road would make nonsense of government’s efforts to put the road in good condition.

Apart from indiscriminate parking on the road, he said, turning the service lane into mechanic workshops, would affect the lifespan of the road.

The Guardian had on June 8 and August 3,2020, reported the activities of motor spare parts traders on the road and a food company that is notorious for parking trucks on the road, thus obstructing traffic.

Despite occasional intervention by government agencies, the situation soon return to normal and this happens everyday. Speaking on the situation, the Federal Controller of Works in Lagos, Olukayode Popoola, lamented that indiscriminate parking on the service lane has remained a headache for the ministry.

He said the ministry has tried its best to evacuate parked trucks on the road. He said: “ We have involved Lagos Task force, still they still remain adamant. I do know why they will turn the road that the Federal Government spent a lot of money to do into garages and mechanic workshops.

“We have towed some parked vehicles from Toyota Bus Stop to Ilasa and still they are not deterred. We will keep enforcing non-parking rule on the service lane. We will do our best but you know we cannot be on the road 24 hours a day,” he added.