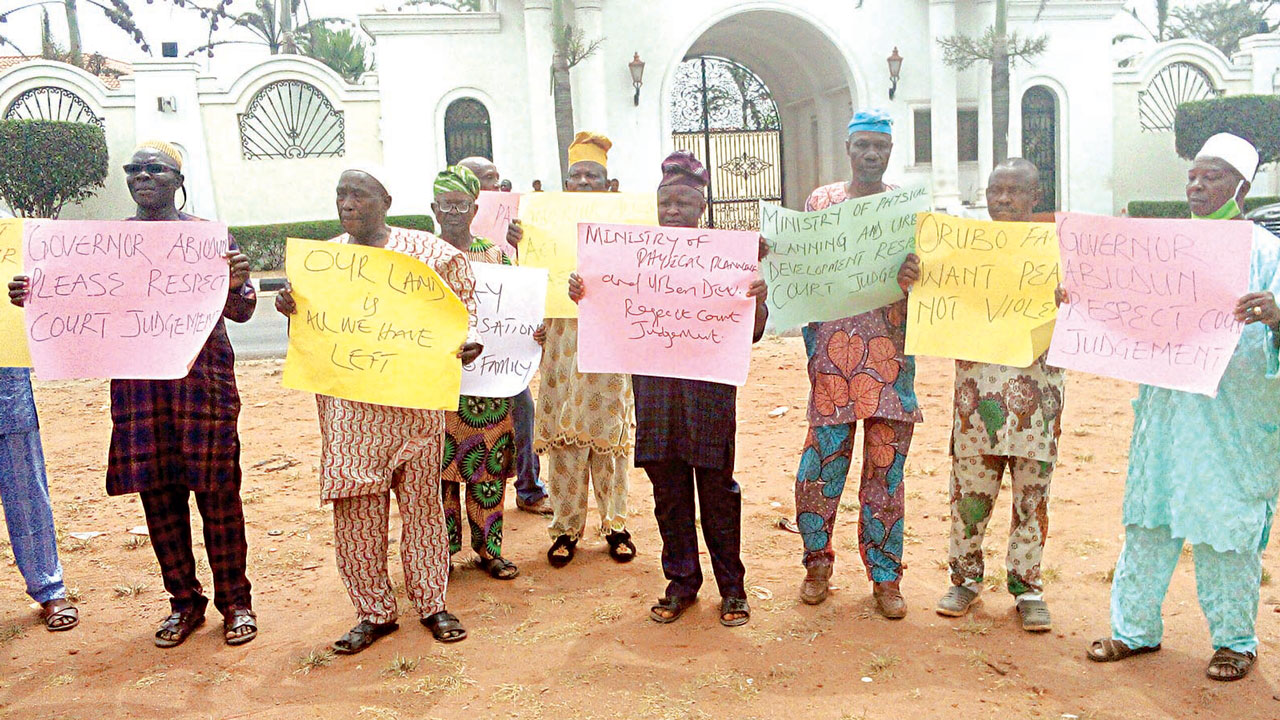 A cross section of the protesters

Over 100 members of the Orubo community in Ikenne council of Ogun state have staged a peaceful protest over alleged invasion of their farmland by the state government.

The land in dispute is a large expanse of farmland lying and being at Iperu, along Iperu-Ilishan Road, Ogun State measuring approximately 136.070 Hectares (336.2 Acres) including 9.674 Hectares (23.90 Acres).

As early as 7:00 a.m last Wednesday, members of the community among whom were elderly men and women besieged governor’s residence in Iperu, and from there marched to the disputed land carrying placards with various inscriptions.

Some of the inscriptions read ‘Governor Abiodun please come to our rescue’, ‘Our Land Is All We Have Left’, ‘Our Support For Government Should Not Be a Curse to Us’, ‘Ministry of Physical Planning and Urban Development Respect Court Judgement’ among others.

Among the protesters are the head of Orubo family, Iperu Remo, Alhaji Waidi Alaka, Assistant head of the family, Mr. Neye Moibi, family secretary, Mr. Shobamowo Taiwo and Olumuyiwa Olayinka among others.

Speaking on behalf of the family, Alhaji Waidi Alaka alleged that there is an ongoing illegal clearance with caterpillar and stampeding planting of survey pillars on their family land for a proposed Cargo Airport by the Surveyor General of Ogun State.

He wondered why government desired to take over their land when no notice of revocation has been issued on any portion of Orubo farmland nor was any compensation paid as contained in Section 44 (1) (a) of the Constitution of the Federal Republic of Nigeria, 1999, (as amended).

He said: “Up to the time of issuing this statement, the government of Ogun State under Governor Gbenga Daniel or any other subsequent administrations of Ogun State never issued, nor served on Orubo family or any of its members any prior notice of revocation of our deemed statutory/customary right of occupancy on any part or portion of our Orubo farmland including the portions sold to the three Companies aforesaid for their alleged Cargo Airport as enacted by statutory law in Section 44 of the Land Use Act nor was any compensation paid as contained in Section 44 (1) (a) of the Constitution of the Federal Republic of Nigeria, 1999, (as amended).

According to him, Orubo family’s progenitor named Odubiro who was a hunter and prominent leader of Lopere military society migrated from Ile-Ife as a refugee from slave traders and settled in the vast area of land as a hunter and private soldier and he successfully held and defended the eastern boundary of Iperu-Remo during the 19th Century Kutujen War of Iperu-Remo.

Alaka stated that the Orubo family had enjoyed ownership of the statutory and customary rights of occupancy on the farmland for centuries adding that part of the land was sold jointly to Beauty Fair Laboratories Nigeria Limited and Sophisticat Nigeria Limited and another 13.546 (33.473 Acres) to Skin Beauty Limited respectively.