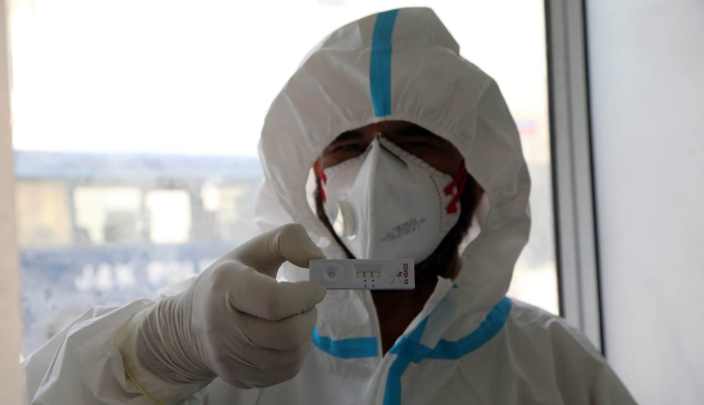 When COVID-19 hit Iyabo’s 70-year-old mother, she and her siblings whispered to the doctors not to disclose it to her, though the “COVID-19, Infectious Diseases Centre” sign was visible all over the isolation centre in Yaba.

They feared she would die of anxiety long before the virus pounced on her underlying illnesses – diabetes and hypertension.

But when the Lagos commissioner for health visited, and COVID-19 kept springing out of his words as he moved around the ward, Iyabo’s mother started panicking.

Though Mama Iyabo was semi-literate, the children successfully convinced her that COVID-19 was not the only disease treated at the centre and that she only had a simple infection well under control.

“God bless you,” she said to Iyabo, after being discharged and told she had been down with COVID-19 and would have to restrict interactions with others for the next two weeks.

“If I had known that it was COVID from the onset, I might not be here. Maybe fear and high blood pressure would have killed me,” the old woman said.

The septuagenarian is among the 131,722 people, who though in the vulnerable demography, survived the pandemic in Nigeria, officially.

The first of the 1,905 who have died was Suleiman Achimugu, the ex-managing director of Pipelines and Products Marketing Company, a subsidiary of the national oil company. Among the high profile deaths are Abba Kyari, chief of staff to President Muhammadu Buhari, and Abiola Ajimobi, former governor of Oyo State.

What began as a public health crisis imported by an Italian in Lagos who tested positive to SARS-CoV-2 on February 27, 2020, morphed into many things, escalating insecurity and causing a major economic crisis. The pandemic has unsettled individuals, small and large businesses.

How Nigeria’s public health sector responded to the Ebola outbreak offered optimism. The structures used to curtail the more deadly virus were still in place and could buy the country some time. The coronavirus proved evasive and its rate of transmission sent many quickly into hospital wards, exposing lapses in an already fragile healthcare infrastructure.

All the over the world, the spread of the disease was fast and furious, outmaneuvering measures to curb it and overwhelming even countries with the most advanced healthcare facilities. The number of those dying from the virus alarmed the world as it tracked pandemic in real time. What was the fate of those with poor healthcare systems?

In Nigeria, the picture got even clearer when some of Nigeria’s high and mighty had to be whisked into Lagos because the hospitals that could come to their rescue were all in the commercial capital and so few.

Average Nigerians on the other hand grappled with rejections at public hospitals that were ill-equipped to detect the virus.

The country initially had to make do with the available equipment for checks at all its entry points while it waited for makeshift isolation and treatment centres built from scratch across many states thanks to one of the largest private-sector interventions in Nigeria’s recent history, estimated at N21 billion.

But the collection of samples and testing remained challenging as the government’s facilities neared a tipping point. Thirteen laboratories country-wide with the capacity to test 1,500 samples daily were producing only 600 tests daily on the back of low sample collection.

In most cities in Nigeria, it took an average wait of four days to get samples collected because of the number of those waiting to be tested at the available government testing centres. And even after the sample had been taken, it took another three days to receive the result.

In those seven days, an individual with the virus is left to infect several others while waiting for a test result before being taken into isolation.

With all available resources devoted to testing for and treating the virus, patients with other illnesses in need of medical attention were denied access. Doctors who lacked rapid testing kits and personal protective equipment ran the risk of exposure to the virus if they attended to patients without testing them.

The Nigeria Centre for Disease Control (NCDC) licensed private laboratories to join the government effort to diagnose the virus months after the queue for those desperate to test for the deadly virus grew longer.

By then Nigeria had confirmed nearly 20,000 cases and 500 dead at the peak of the first wave of the pandemic.

“There is a lot more work to do because very few of our hospitals were built for this trial in terms of protecting healthcare workers, making sure we have the capability and a good supply of logistics,” Richard Ajayi, board chairman, Lagos State University Teaching Hospital (LASUTH), told BusinessDay, applauding the authorities for the how it has managed the pandemic so far.

“We need to articulate a strategy to ensure we double it down. A lot of healthcare workers have died primarily because our healthcare system is not designed to protect them. We need to solve that and even supply chain issues,” he said.

The accreditation of some private laboratories for diagnoses of COVID-19 was some of the right decisions made in response to the pandemic in the country.

Testing capacity has also been ramped up to over 70 laboratories, feeding the tracking system of the NCDC with clearer information of prevalence among travellers as well as community transmission in states and local government areas.

In Lagos, the epicentre of COVID-19 in Nigeria – with over 34 percent of the country’s total case-load as well as over 18 percent of deaths, there are 21 accredited laboratories and four public health laboratories testing for COVID-19 currently.

And despite coming late into the picture, private labs accounted for 45 percent of a total of 236,212 samples tested as of December 2020, cumulatively marking 24.6 percent of the total tests done across the country, the state government said.

Apart from testing, Nigeria equally got it right with genomic sequencing of the disease by producing the first data on the genetic make-up of the virus in Africa.

Once the first COVID-19 case was confirmed, Nigeria mapped information on the genetic make-up of the virus in 72 hours, the shortest time frame in the world.

The feat came from a collaboration between the African Centre for Excellence for the Genomics of Infectious Disease (ACEGID), Redeemer’s University, Ede, Osun State; the NCDC, the Centre for Human Virology and Genomics (CHVG); Nigerian Institute of Medical Research (NIMR); the Centre for Human and Zoonotic Virology (CHAZVY); College of Medicine University, Lagos University Teaching Hospital (LUTH); and the Lagos State Ministry of Health Bio-Safety Level 3 (BSL-3) Bio-Bank facility.

In addition to the list of the things done right is the adoption of rapid testing kits as complementary means of testing for the virus, particularly at points of care.

After seeing the painful gaps associated with the long wait for the usual test results from standard laboratories and the escalating rise in infection rates during the second wave, the NCDC kicked off rapid testing in five hospitals in Abuja.

Nigeria, like most countries, is scrambling to buy as many doses of vaccines in a global race to control the pandemic. Frontline healthcare workers and other first responders are expected to benefit first.

Expectations have been raised multiple times over promises of doses arriving from manufacturers in the US, UK, Russia and China.

But what seems most feasible is the pledge of 16 million Astrazeneca vaccine doses, which Osagie Ehanire, minister of health, on Thursday confirmed would arrive next week. Boss Mustapha, chairman of the COVID-19 task force on Sunday said 4 million doses were expected tomorrow.

That appears more realistic following the delivery to Ghana of the first consignment of 600,000 doses of Astrazeneca vaccines from COVAX, the global initiative led by the World Health Organisation, on Wednesday.

The minister hangs Nigeria’s hope of vaccination on manufacturers, assuring it is prepared to store and administer.

Beyond vaccination, experts and stakeholders say that Nigeria must learn from the hard lessons the pandemic has taught and take adequate investment in public health infrastructure as a cue for better preparedness for the next outbreak.

According to Bill Gates, one of the biggest financiers of health globally, Nigeria does not have to divert its very limited resources for health into trying to pay a high price for COVID-19 vaccines.

He suggests the country take up as much as it can from donations such as COVAX, and focus the most of funds available for health on repairing the primary healthcare system of the country.