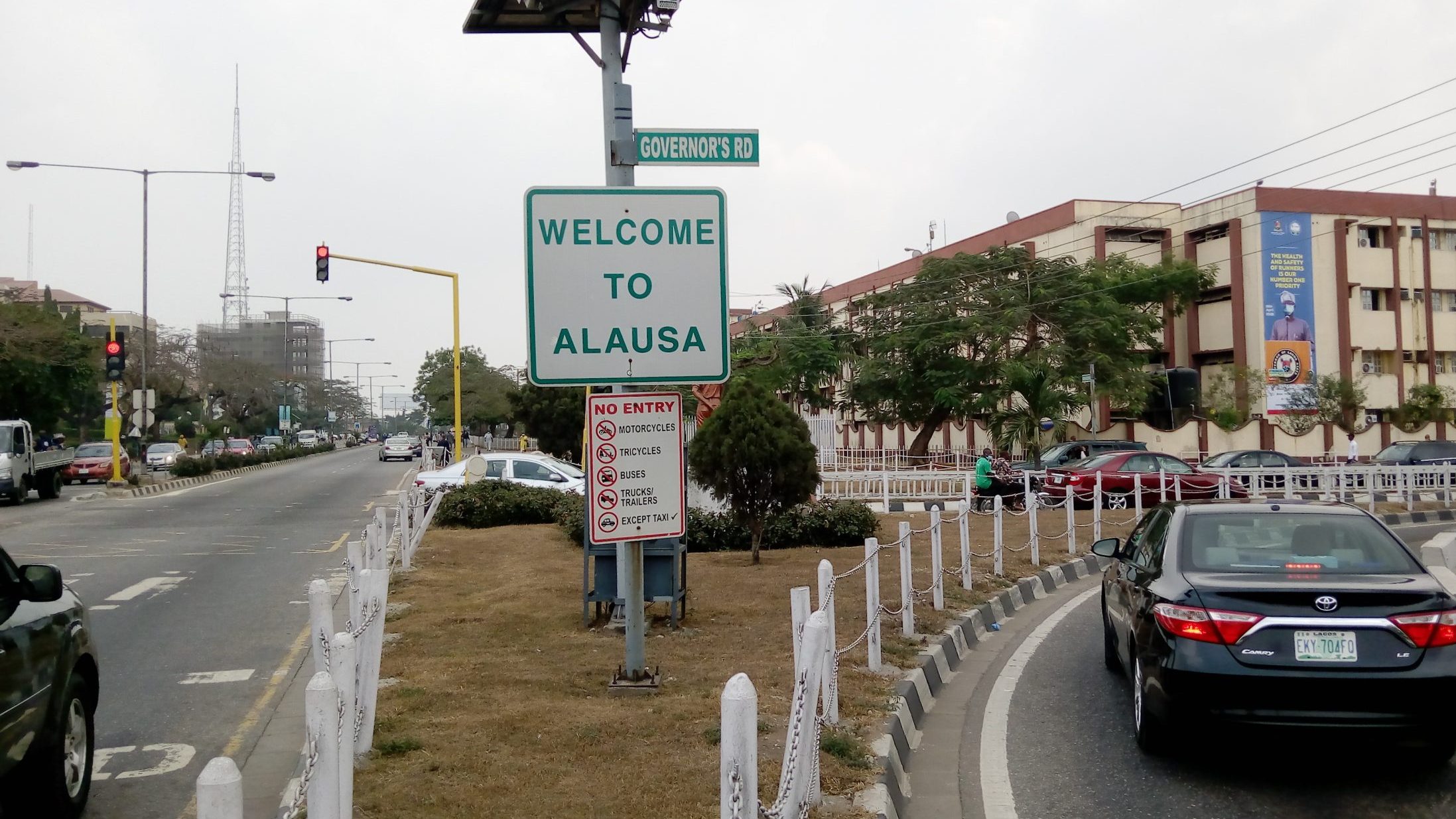 A signage at the Lagos State Secretariat, Alausa, the seat of Lagos State Government, where motorcycles are prohibited. An Okada rider and passenger could be seen on the other side behind a red vehicle on Thursday, February 11, 2021… Photo: DENNIS EREZI

When the authorities in Lagos State, Nigeria’s commercial capital and one of the country’s most populous states, banned commercial motorcycles and tricycle from major routes in Lagos city, officials said the move was aimed at securing lives and sanitising transportation in the city.

Traffic in the city is maniacal, frenzied, time-consuming, and can be outright dangerous. To reduce the number of hours spent daily in traffic, thousands of residents of the state resort to using commercial motorcycles and tricycles – okada and Keke Marwa as they are popularly called. Their sizes provide ease of navigating through hellish gridlocks.

Besides, thousands of Nigeria’s army of young people are employed in the most disorganised public transport sector ferrying people on around the city’s major highways and inner streets.

“It’s a lot easier for me to take a bike from here (Festac on the mainland) to Ensure Metta to get what I want to buy and come buy quickly,” said Ibrahim Bashir, an auto mechanic said, although he has a car of his own. “The traffic is discouraging.”

But state officials said in February 2020 that the motorcyclists and tricyclists, the former especially, have wreaked more havoc than could be imagined.

Consequently, the government restricted their operation in six local government areas. It said the ban will restore sanity to roads and reduce security threats. The ban encompasses Okada riders and bike-hailing companies like O’Ride, Max NG, and others.

How are Lagos roads now?
It is over a year since the ban has been imposed and Okada riders still rule on major Lagos express roads, defying the government’s order. In fact, they now ply the roads in Alausa Secretariat, the seat of the Lagos State Government despite signages that reads “Okada/Motorcycles are prohibited”. 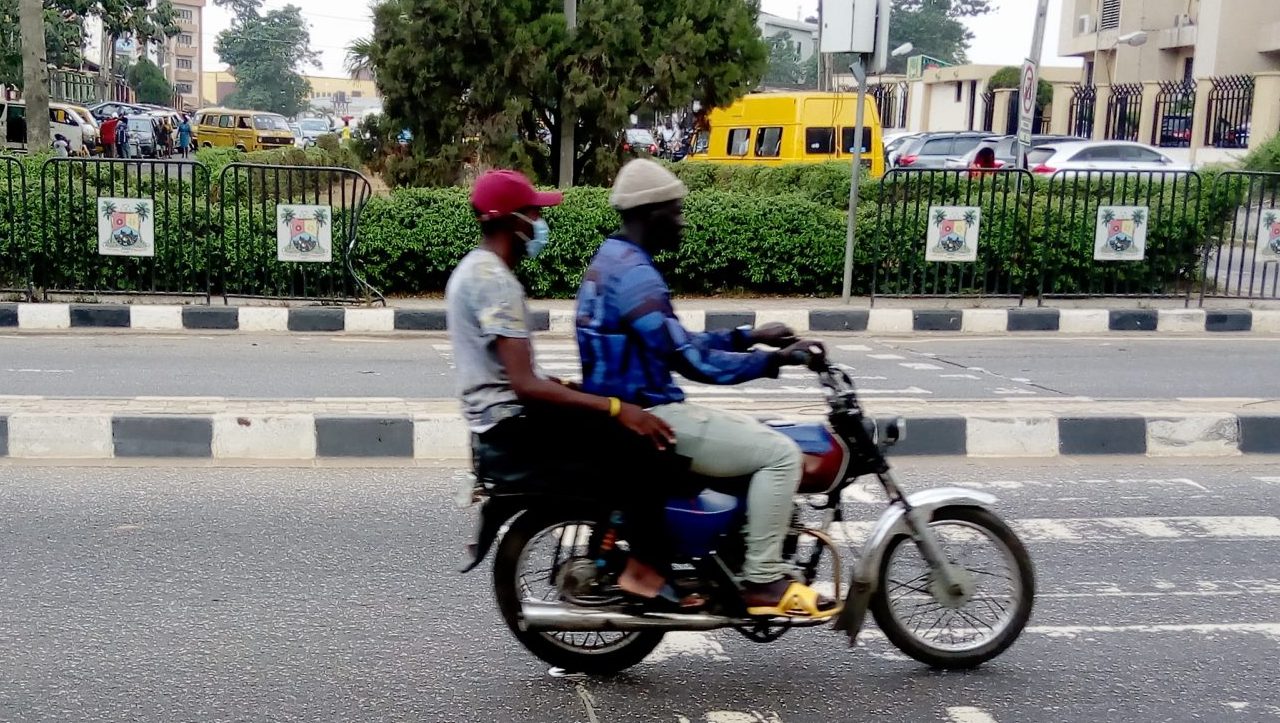 Unregulated okada riders are ubiquitous on Oshodi-Apapa Expressway and other major roads. In some cases, the motorcyclists charge exorbitant rates and mostly without safety measures.

And as traffic jams continue to exert more stress on commuters and road networks in the city without any tangible solutions yet in sight, thousands are commuters still rely on the banned motorcycles and tricycles to move around even in the areas where they were restricted from.

The Bus Road Transit (BRT) owned by the Lagos State government would have been an option for some commuters because of the subsidised transport charges and a section of the road dedicated to the blue-coloured vehicles but they are not immune to the traffic situation.

“Going to work late isn’t an option for me – I must avoid a sack from the bank I work in this economic situation,” one Ademola Adekola who said he relies on using Okada from Ikeja to Oshodi told The Guardian.

GoKada, O’Pay, Max NG, others gone. Is Lagos State killing businesses?
While Okada riders continue to be ‘king of the roads’, ride-hailing companies whose operations have been halted would feel hard-done, with millions of dollars into the Lagos transport sector almost going down the drain. 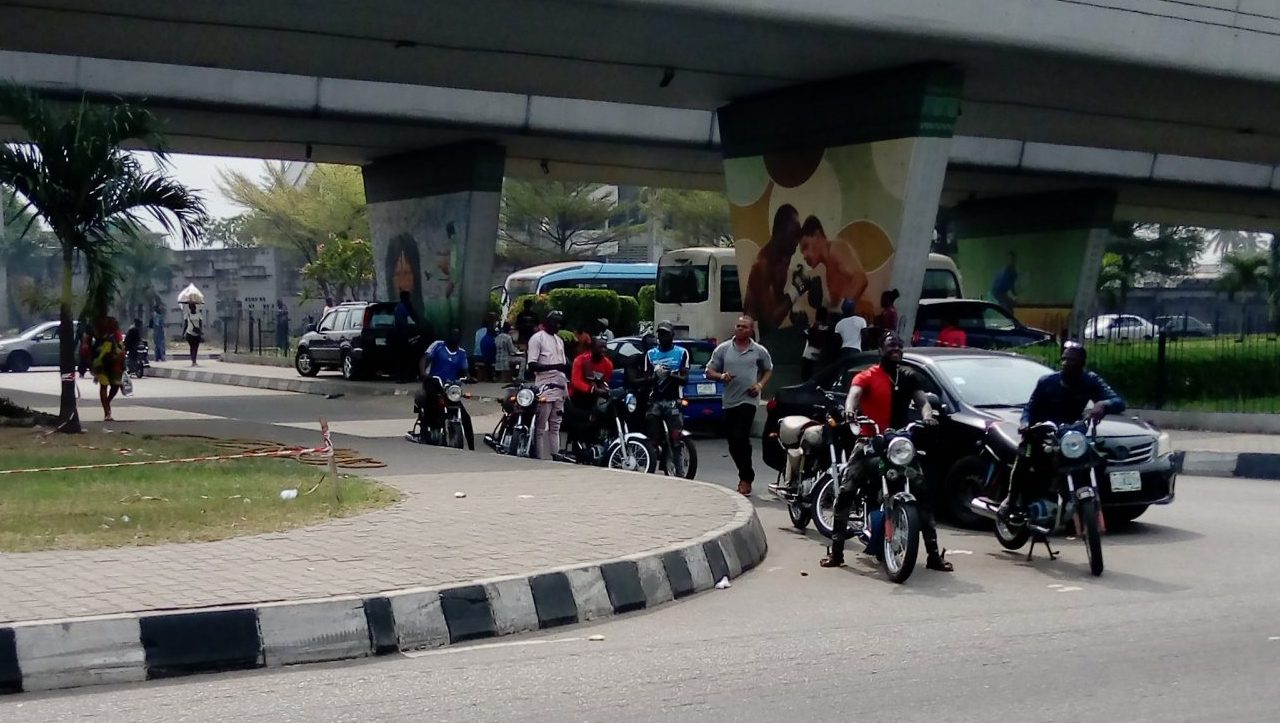 A group of Okada riders in between the road dividing Teslim Balogun Stadium and National Stadium in Surulere, Lagos, where motorcycle operations are prohibited on Thursday, February 11, 2021. Photo: DENNIS EREZI

The prospects of mass employment and reduction in vehicular movements on Lagos’ over-stretched roads has been cut short by the ban. Some investors in the transport sector believe the ban is a bad signal for potential investors in the state.

Lagos State information and strategy commissioner Gbenga Omotosho on Tuesday refuted claims that the government was working against the growth of businesses because of the Okada ban.

“There’s been talks of so many people bringing investments and all of that but safety of lives is paramount to the government of Lagos State,” Omotosho said.

Omotosho insisted that the ban on motorcycles was in the best interest of the people of the state to safeguard their lives from road accidents often caused by the reckless operation of Okada riders.

He stated that the government did not target bike-hailing companies but said none of the private and public motorcyclists should be operating on the road because they have tendencies of similar dangers.

“The hailing services were not targeted at all,” Omotosho said.

“In fact the problem is that the hailing services were seen to be committing the same offence that the popular motorcyclists (Okada riders) you see around were committing. So they (bike-hailing companies) had to go with them.

“There is no way one could be left for the other.” 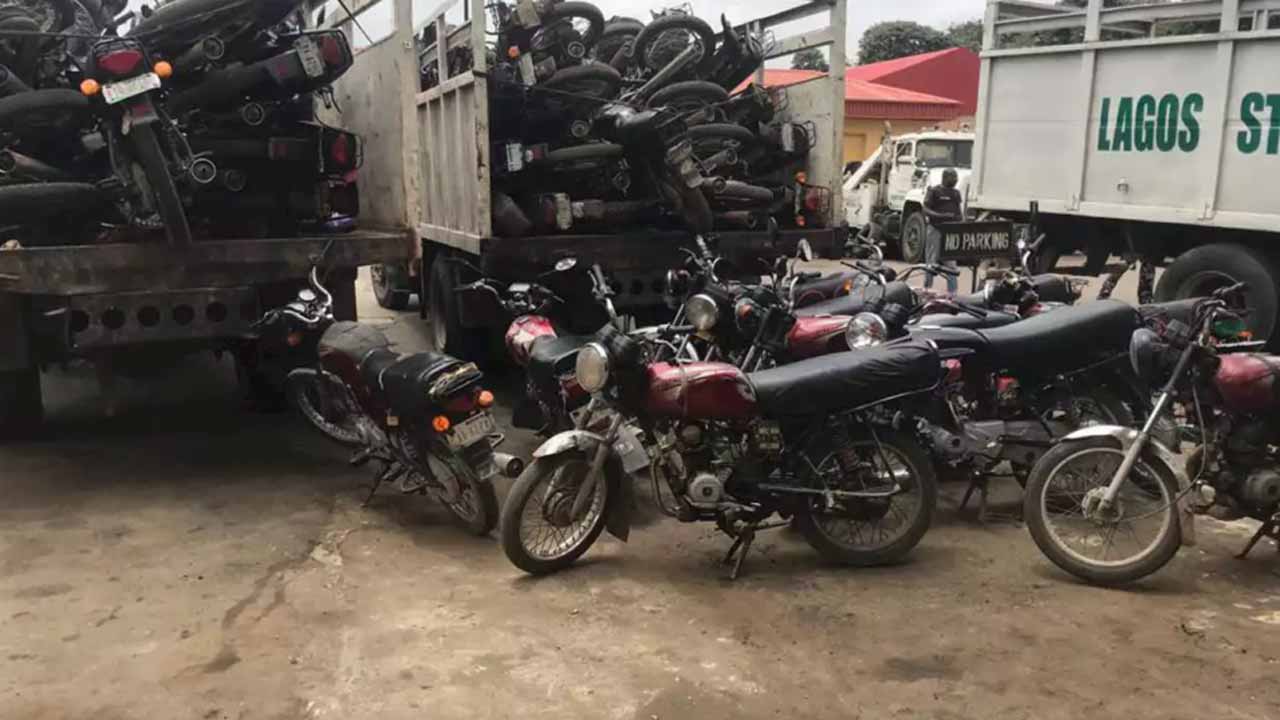 Taofik Adebayo, the spokesman of the Lagos State Taskforce, an agency responsible for the enforcement of the ban, said a minimum of “250 motorcycles are confiscated by operatives during operations every week.”

Adebayo absolved the government of any blame for the halt in the operation of bike-hailing companies in the state.

“Nobody asked them to go,” Adebayo told our correspondent on Tuesday. “They choose to leave the roads. The only thing the government said was that there is an engine requirement for any bike to be on the road.” 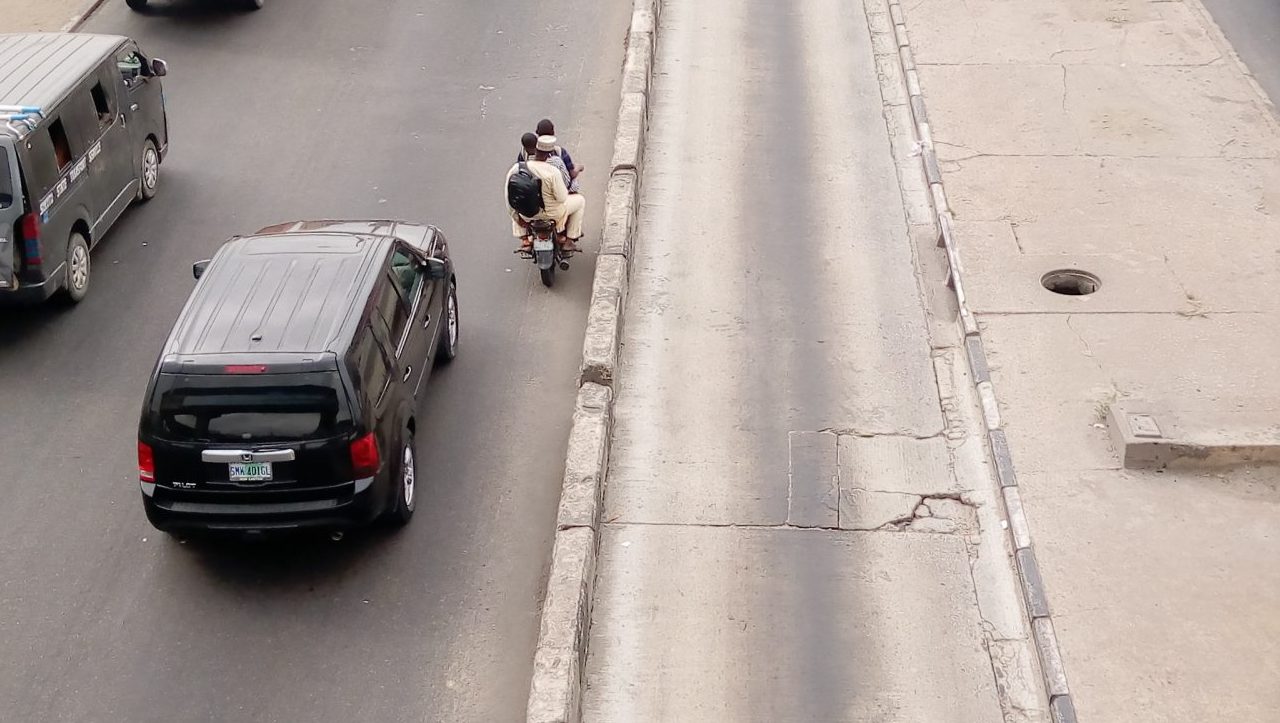 Despite glaring views of unhindered operations of Okada riders in the restricted roads, Adebayo said the enforcement is on course and has recorded success as “lesser accidents have been recorded in Lagos State since the restriction was announced”.

His claim was corroborated by the National Orthopaedic Hospital, Igbobi, Yaba where victims of road accidents are often treated in Lagos State, especially those with severe wounds and injuries.

Ranti Babalola, head of emergency services in the hospital, said they “observed a cynical decline in road traffic injuries resulting from motorbikes” when the ban was just announced in 2020.

He, however, said there has been a corresponding increase in road accident fatalities due to the “poor enforcement” of the ban.

Babalola did not disclose figures of road injuries and fatalities caused by motorcycles pre and post the restrictions. 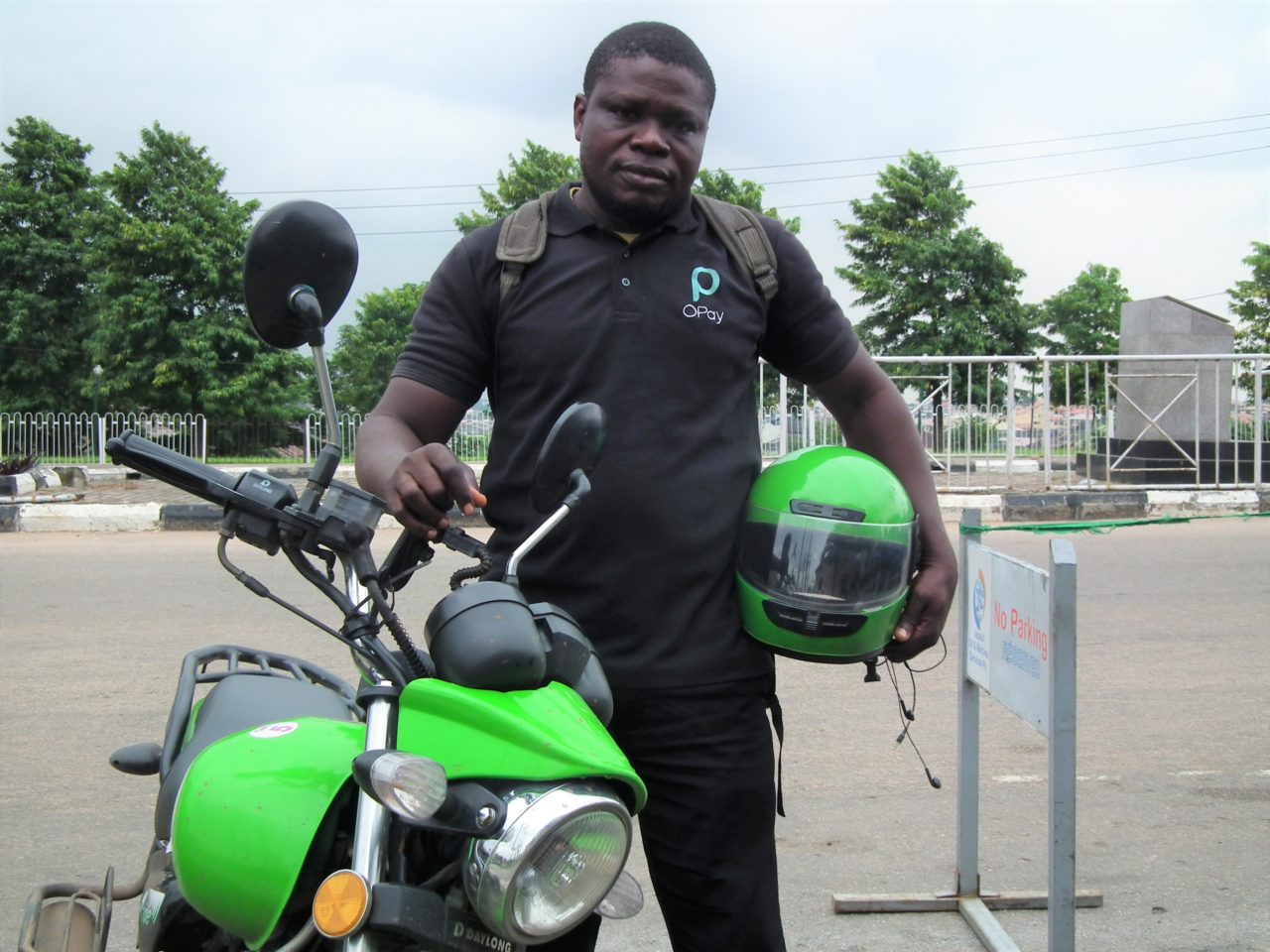 An ORide motorbike rider poses for a picture at the company’s head office in Ikeja on July 24, 2019. PHOTO: TONYE BAKARE

While the restriction hit hard on their operations, bike-hailing companies have since diversified to other businesses. Gokada, ORide, Max NG have all moved to logistics and courier services in Lagos State.

For Chinedu Azodoh, Max NG co-founder, the ban was an opportunity for the company to pivot into other business units and drive growth in other cities in Nigeria.

“Since the ban, we have been aggressively pushing growth in other markets. Today we’re outside Lagos, we currently operate in Ibadan which is a bigger market than Lagos for us then Akure, Kano, Ekiti, Ogun state,” Azodoh told The Guardian in an email.

But he admits that “the government restrictions were difficult, it was unexpected because we thought as a company, we had done a lot of work in building relationships.”

OPay, the operators of now-defunct ORide, declined to speak about the effects of the restrictions on its business and investment. A spokesman for the company said, “the company has moved on to other things.”

The company announced the closure of three of its units – ride-hailing services, ORide and OCar, and logistics service OExpress in July, blaming harsh business conditions and the coronavirus pandemic for its decision.

With Max NG’s 1000 bikes in operation in Lagos prior to the restriction, the bike-hailing company’s investment into the state’s transport sector is estimated to be about $1.8 million. According to Azodoh, one bike costs N700,000 on average.

Max NG had a minimum of 1000 bikes and tricycles before the ban. GoKada arguably had the largest chain of motorcycles with other bike-hailing companies sharing a proportion of 1000 motorcycles on average.

The ban consequently meant a massive loss of jobs for the riders, many, whose means of livelihood was hampered. Though it was hard for the companies to swallow the restrictions. It was harder for the bike riders.

“I was hopeless (when the government ordered the restriction),” Olamide Ogunronmbi, a former O’Ride motorcyclist said. “There was nothing to eat and I couldn’t perform my responsibilities to myself and my family.”

Private transportation companies in Lagos are heavily reliant on investor participation. This may have dampened their morale but some of the companies have stayed afloat due to resilient innovative business drive and investor’s belief in the companies.

For Max NG, Azodoh said, “the blessing is that we have really amazing investors who stood by us during the trying times by helping us turn things around and figuring out strategic ways to continue to deploy capital to drive success.”

Azodoh, however, declined to speak on the almost seamless operation of their okada counterparts but said they are willing to resume operations if the government reverses the restriction and leaves the door open.