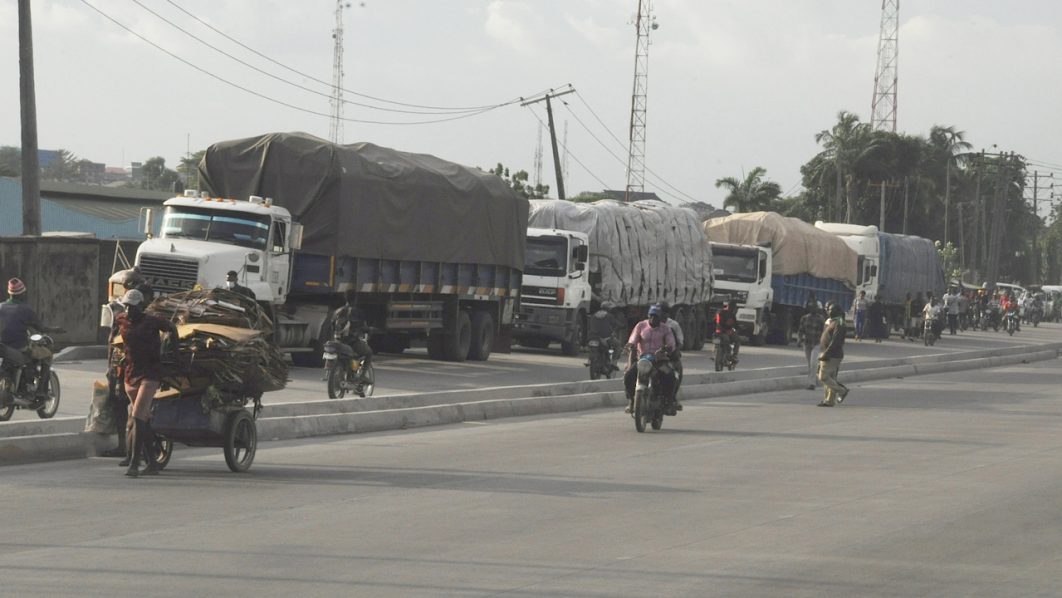 Plying the Oshodi-Apapa expressway for the first time might leave one confused as to whether it is the major expressway leading to the country’s major seaports or an inner street, as most major bus stops have been taken over by commercial motorcyclists, otherwise known as okada, while the service lanes have been turned into the car park by trailers, tankers, containers, and other articulated vehicles.

Every day, road users and pedestrians are forced to contend with hundreds of okadas taking up one part of the road hustling for passengers, and when in motion, they constitute a danger by violating the one-way rule on the express, ferrying passengers at top speed.

Every once in a while, they get into accidents that sometimes result in injuries and even casualties, but that has not deterred them in any way, as their numbers keep swelling daily.

Last year after the EndSARS protests, many road users and traders along the Oshodi-Apapa express noticed an uptick in criminal activities and robbery using okadas to dispossess residents of their valuables. But nothing seems to be done to nip this in the bud.

These robbery attacks, which are very rampant around major bus stops, see the robbers descend en-mass on okadas, snatching bags and phones and zooming off into the night.

Just last week, a victim, who simply identified herself as Peace, had her bag snatched at Ilasa bus stop just as she came down from a commercial bus (danfo). The robbers, passing beside her on a bike, grabbed her bag, while she ran after them crying to no avail. She is just one of the many victims of the robbers, who have become more daring and bold, no longer even waiting for the full cover of darkness commencing operation robbing.

An okada rider at the Five-Star bus stop, who identified himself simply as Idris, claimed he just started plying the expressway recently as “there is more money there. I was plying the inner routes before, but I wasn’t seeing much money there. When I complained to my friend, he said I should enter express, as there is more money there, and I heeded his advice and entered the express. I am afraid of the task force people because they can come at any time to raid us, but I need to make money,” he said.

When reminded that he was not supposed to ply the road that doing so is also very dangerous, he feigned ignorance, adding, “I’m not a thief and I always try to stay on one side of the road. How is what I’m doing to keep body and soul together illegal?”

When told that riding on the expressway was illegal and riding against the traffic a crime, he told The Guardian to leave him alone and tell that to someone else, a typical attitude of his ilk.

The Oshodi-Apapa expressway is not the only route suffering the onslaught of these illegal motorcyclists, as they could be found at most major bus stops all over the city.

Earlier this month, the Lagos State Environmental and Special Offences Unit, popularly called Task Force, raided Isolo and Jakande Gate, confiscating over 81 motorcycles for flagrant abuse of traffic rules and regulations. But on a visit to those areas the next day, they were back again. Also, the task force raided okada riders at Toyota and Five-Star bus stops, impounding several motorcycles. But by the following day, it was business as usual, like nothing happened.

Earlier this week, several were feared dead and many injured when okada riders and members of the National Union of Road Transport Workers (NURTW) were engaged in a deadly crash at the Ojo Local Government Area in Lagos. The clash, which started at Alaba-Rago, soon spread to other areas, shutting down activities around the axis. That same day, okada riders fiercely engaged Task Force and the police in the Lekki area of Lagos, disrupting normal activities as residents scampered for safety. One man at the scene, who refused to divulge his name, lamented that the riders have taken over and have become uncontrollable. “It is a great shame that it has come to this level. These people have taken over where they are not supposed to be and it is clear now that they will not vacate this place gently.”

A road user, Ngozi Okechukwu, lamented the continuous nuisance the motorcyclists constitute at major bus stops, urging the government to look into it urgently. “While I understand that they are a necessary means of transport for some people, they should be restricted to the service lane at most and not allowed on the express. They break traffic laws at will and enforcers often look the other way.

“Also, I urge the government to get those trailers off the service lanes, instead of blocking the free flow of traffic, and this would ensure those okadas are confined to the service lane.

“The other day, a vehicle hit an okada man at Iyana-Isolo, who was clearly at fault because he made an illegal U-turn to pick a passenger, instead of reprimanding him, other riders gathered around the car owner, threatening to burn his car down.

“These are just some of the impunities we have allowed to fester for long and these okada riders have become emboldened in their illegality.”

Some traders at the popular Ladipo auto spare parts market argued that the ‘bikes’ should not be banned, but regulated instead. Another trader, who identified himself simply as Vincent, said the okadas are very helpful to them in moving from one point to the other.

“Everyone knows how this road is, especially going to Mile 2; the road is always blocked and the traffic can be very bad sometimes. If you need to meet up with a customer or supplier, would you be telling them stories? I know those riders can be very rough sometimes, but instead of banning them, let us find a way to regulate their activities.”

The trailers and articulated vehicles parked on the whole stretch of the service lane belong to Starlink Global and Ideal Limited, an agricultural products export company, near Aswani Junction on the Oshodi-Apapa Expressway.

One of the trailer drivers, who identified himself as Rabiu, explained that they were waiting for their turn to offload inside the company, and when asked when that would be, he said he had no idea and directed all questions to his boss, Uthman Yomi Rasaq of Rasuth Haulage Ventures, who said even though they did not wish to inconvenience other road users, but there was nowhere else for them to park.

“We are pleading for everyone to bear with us as we try to offload the products. Adequate space is an issue for us and we are trying our best to get the trailers off the road. This is a seasonal thing and we are in the season, that is why you can see us parked like this on the road and as soon as the season is over, you won’t find us out here,” he promised.

Chief Security Officer of the company, Stephen Uwadiae, said they do their best to control the traffic on the road, especially during peak hours, adding: “If you come during peak hours in the morning and evening, you would see me personally directing the traffic, because we understand that the trailers are an obstruction.

“Some of the trailers you see here are offloading produce, while others are loading to go to Apapa. There are over 20 trailers inside the compound right now offloading goods as we speak, but we promise that in a number of days, all the trailers would be cleared from here.”

When told that the trailers have been parked there for over a month, taking up one lane of the two-lane road, he said it was different sets and not the same set of last month, saying: “Space is our problem and we are seriously looking for space around this axis. Space is scarce around here and if you can show us a place to rent, we would grab it right away with both hands.

“We understand that the trailers are blocking the road and we apologise to road users and plead for everyone’s understanding, while we try to quickly get them off the expressway,” he said.

A visit to the service lane a few days showed that the trailers and articulated vehicles were no longer on the road, even at the time of filing this report.

Chairman, Lagos State Environmental and Special Offences Unit, Shola Jejeloye (a Chief Superintendent of Police), speaking to The Guardian on telephone, decried the activities of the commercial motorcyclists (okadas) plying major highways and restricted routes and articulated vehicles parked indiscriminately on the highways.

“This is a serious problem for us and we work every day round the clock to carry out enforcement all over the nooks and crannies of the state, but they want to frustrate our efforts. There is no excuse for their activities and what they are doing is reckless, illegal, and dangerous. When they are on major highways they are not supposed to be, they pose a serious danger not only to themselves but also other road users and pedestrians because they mostly face oncoming (one-way) traffic on said highways.

“They are committing two offences plying a restricted route and using one-way and most times, the passengers they carry spur them on because they are in a hurry to get to where they are going.

“Much as we try to carry out enforcement, we don’t want anyone to lose his or her life, so we go with a lot of caution during raids and to the glory of God, we have never recorded any casualty while doing our jobs.”

Jejeloye added that despite the frustrations and stubbornness of the motorcyclists, the task force would continue doing its job and ensure traffic laws are obeyed, noting: “We have been raiding the whole stretch of Oshodi-Apapa expressway regularly from Oshodi up to Mile 2 and beyond. But except we want to stay there permanently, it is difficult to control them, because we are very much aware that the moment we leave, they go back.

“We go to different areas of the state daily to rid the highways and restricted areas of these motorcyclists, but their numbers seem to be swelling daily.”

Asked if the agency would consider random regular raids on major highways, he said he would give it due consideration and work something out, adding: “We need everyone’s cooperation to get rid of them once and for all. If we all refuse to use them on the highways, they will go somewhere else, but they always see passengers and these passengers are often the ones directing them to pass one-way and break the law.

“As for the trailers and other articulated vehicles parked on the Oshodi-Apapa expressway, we usually raid them, in conjunction with the Ministry of Transportation, and ensure they stay off the expressway, but now that you have mentioned that they are parked there again, we would look into it and do something about the situation,” he said.