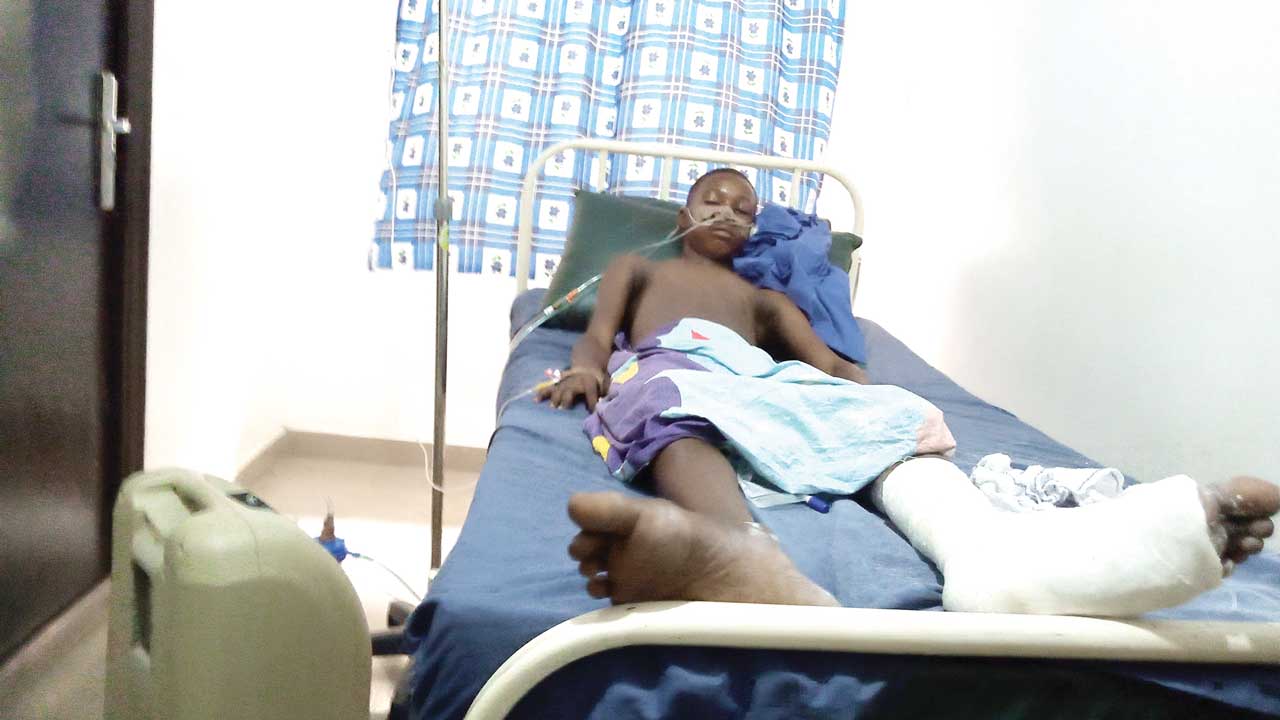 • Parents seek financial support, as15-year-old survivor, others remain on oxygen
• Buhari, Tinubu condole with parents, students as Lagos closes Ojodu grammar school
It’s a bad day for Mr. Dauda Ajibade, the father of 15-year-old Olarenwaju Ajibade, who survived Tuesday’s trailer accident, in Ojodu-Berger area of Lagos State, seeing his son placed on oxygen for life support. He is praying for his son to come out of it.

The Senior Secondary 2 student of Ojodu Grammar School, is one of the three survivors The Guardian visited at Gods Apple City Hospital on Wednesday.

Mr. Ajibade told The Guardian that  Olarenwaju, who fractured  his leg,  is placed on oxygen and has blood dripping from his ear.

Asked who is paying for the medical expenses, he said the nurses already demanded a sum of N100, 000 for initial deposit and he hoped that the Lagos State Government would wade into the situation before it gets worse.

He said: “I was told that immediately the accident happened, two died but I haven’t heard anything. How the government would help us on this matter is important. Although the Ojodu Local Council Chairman, Hon. Kayode Ajakaye visited on Tuesday and made promises to us. But you know we are in Nigeria, there are few things that I can say. But the government should help  give these  children maximum  treatment, because they are the leaders of tomorrow. He is currently on oxygen. They said his breathing is low and that he needs oxygen.”

Another survivor, 12-year-old Akinkunmi Usain, a JSS1 student of Omole Junior School, had bandages on both sides of his head and could not speak. His father, Mr. John Francis, an uber driver,  (a ride-sharing company),  said, an initial deposit of N30, 000 had been made, while they pray for his recovery.

Francis got to know about the accident, while he was ending a trip in Alausa. He said his younger sister called to inform him of the tragedy.

“ It was my younger sister that called to inform me about the accident and I was working at that time. Thank God, I was close by around Alausa. From there I drove down to the school to find out what happened. He had closed for the day and was on his way home. He crossed over to Grammar School and wanted to make his way to Aina Street when the trailer hit him,” he said.

Wisdom Ezejiofor, an SS3A student of Ojodu Grammar School sustained bruises on his body, legs and waist. His mother, Mrs. Grace Ezejiofor, a business woman said when he woke up in the morning he was limping and unable to work.

She added that the x-ray that was carried out on her son showed that the 17-year-old had severe injuries beneath his spine down to his leg and had been informed by the nurses that he was under observation.

“They have been treating him since morning and when the Doctor asked him how he was, he responded fine. He sustained some injuries to his side, leg and waist. We did x-ray and they said he had injuries on his waist and they would monitor him. Because he limps when he walks,” she said.

Mrs.  Ezejiofor said her daughter,  who is in SS2 called her to inform her of the accident and that when she got to the scene, she burst into tears when she saw her son’s shoe on the road without his body.

She said: “My daughter told me there was an accident that involved a trailer and she is not sure if he survived. Immediately I got to the scene I saw my son’s shoe, I screamed and said my son is among them. I was shouting and saying I wanted to see my son, where did they keep them? They were asking me to calm down. it was my daughter that called to give the address of this hospital.”

“When I got here I saw that they were already giving him drip and I went down stairs. He’s getting better now.

“A lot of people have visited, both the local government, Commissioner of education, principal and teachers. They didn’t ask me anything, they only told me to calm down and that everything will be okay.”

MEANWHILE,  the once boisterous Babs Fafunwa Millenium Senior and Junior Secondary School, Ojodu Berger, Lagos, was a shadow of itself  yesterday, as only sympathisers and officials of government were available, while teachers were seen in groups discussing the ugly incident.

Some students, who were in the school early in the morning were asked to go home when it was announced that the Lagos State Government had shut the school till January to avoid a face-off with the Nigeria Police.

Security officers were also stationed at strategic points within the vicinity, while the burnt truck was seen parked close to Grammar School Bus Stop.

One of the visitors, the Lagos State Commissioner of Commerce, Industry and Cooperatives, Dr. Lola Akande, lamented that the accident that claimed students of Babs Fafunwa Millenium Senior and Junior Secondary School, Ojodu Berger, Lagos, on Tuesday was avoidable.

Apart from officials of the Federal Road Safety Corps, Lagos State Traffic Management Authority (LASTMA) and police, who operate on the road, there is no caution sign,  speed limit  sign or bump on the road, which could have prevented the accident.`

Akande said she was in the school to sympathise with the school authority and parents who lost their loved ones in the incident.

Also, an executive member of All Ojodu Residents Development Association, Bakare Olufunbi Lateef, said: “During Akinwumi Ambode’s era, all truck drivers were told to operate at night, now, you see them operate without caution. Same yesterday (Tuesday), I was told that a few days before the incident, bribe seeking policemen shot at a tipper full of gravel. So, it was by a divine grace that other tragedy was prevented. The Babajide Sanwo-Olu government may need to revisit the Ambode proclamation.”

The  Secretary, Ojodu Residents Development Association, Gabriel Agboola Adeleke said they’ve been begging the government that there should be speed breakers for vehicles plying the route but there is nothing like that any longer.

“Before, there were Zebra Crossing signs, but you can’t find that anywhere around again. We wrote many letters to the government when Babatunde Fashola was the governor.
“The government must expand the junction and construct a roundabout in the junction,” he said .

President Muhammadu Buhari has commiserated with parents, relations and friends of Ojodu Grammar School students, who lost loved ones in the accident.

President Buhari also condoled with the government and people of Lagos State and the authorities of Ojodu Grammar School over the sad and painful loss.

The President prayed that God will comfort the grieving parents and relations at this very difficult time, and grant the injured quick recovery.

Also, former Lagos State governor and All Progressives Congress (APC) National Leader, Asiwaju Bola Tinubu, has commiserated with Governor Babajide Sanwo-olu, Chairman of Ojudu Local Council Development Authority, Mr. Segun Odumbaku, and the families, friends and loved ones of all those who died in Wednesday’s tragic road traffic incident. He called on the security agencies to thoroughly investigate this “preventable and tragic incident.”

In a letter to Governor Sanwo-olu, which he personally signed, Asiwaju Tinubu said: “I offer my sincere condolences to the families, friends and loved ones of all those who perished in Wednesday’s tragic road traffic incident.

“School children on their way home from an otherwise ordinary day of school needlessly lost their lives as a result of one man’s wanton recklessness. I was deeply shocked and saddened when I learned of what took place and my thoughts and prayers are with those who lost their lives and all of the innocent men and women who were forced to witness this catastrophic incident.

“This was such a senseless and unexpected disaster and I join with you, Mr. Governor, in mourning the devastating destruction of young lives in our state.

“This is a difficult moment for all Lagosians. I call on the State Police Command to thoroughly investigate this preventable and tragic incident and to bring, swiftly, to justice the man responsible.”

“It is important that we all learn the lessons of this incident and that, as leaders of this great state, we do all that is within our power to put in place measures and safeguards to prevent a recurrence of similar incidents in future.

“Let me also express my support and gratitude to Lagosians, who immediately provided assistance at the scene as well as to the men and women of the state’s emergency management agencies for their equally speedy response to the disaster. May God bless you and all the great people of Lagos State.”