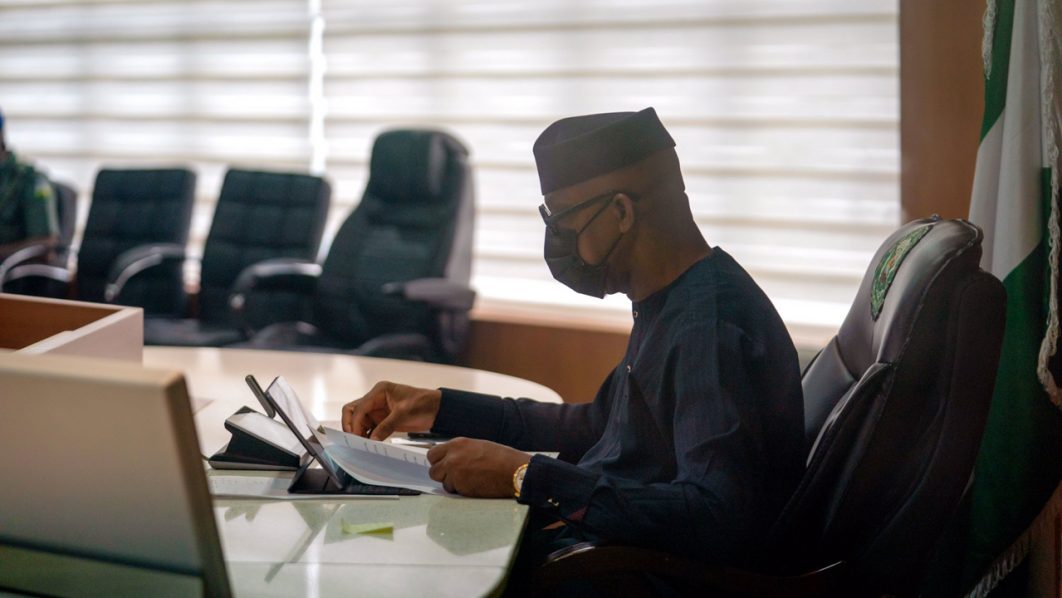 Gov. Dapo Abiodun of Ogun on Friday presented the Staff of Office and Instrument of Appointment to the Obelu of Esure, Ijebu – Imushin, Oba Abdulsamad Kasali.

The News Agency of Nigeria (NAN) reports that Oba Kasali, a banker and property developer from the Alarada Ruling House, succeeded Oba Kamoru Sansi, who joined his ancestors in 2019 after 33 years on the throne.

Abiodun, who was represented by Mr Afolabi Afuape, Commissioner for Local Government and Chieftaincy Affairs, urged the people to live in harmony, saying no meaningful development could take place in absence of peace.

Abiodun charged the new Oba to refrain from acts inimical to the growth and interest of the state government and urged him to ensure the peace, unity and development of his people.

He lauded the Awujale of Ijebuland, Oba Sikiru Adetona, and the Esure ruling family for the emergence of Oba Kasali in a peaceful way.

The governor noted that the selection process followed due process as prescribed by the Chiefs Law, Laws of Ogun State of Nigeria, 2006 as well as the customs and traditions of Esure Ijebu.

“Let me enjoin all sons and daughters of Esure to cooperate fully with the new Obelu in his efforts at making Esure greater.

“We, therefore, enjoin all and sundry in this ancient town to continue to live together in peace, knowing fully well that no meaningful development can take place in an environment of rancor and acrimony,” he said.

Abiodun urged the Oba to be true custodian of the culture and traditions of the people as well as take responsibility for the security and economic development of Esure and its environs.

The governor urged the new Obelu of Esure to continue to mobilise his people to support his administration, particularly in the prompt payment of approved taxes, rates and levies on which the government relies to bring more of these dividends to the people.

In his remarks, Oba Adetona who was represented by the Dagburewe of Idowa – Ijebu, Oba Yinusa Adekoya, urged the Obelu to strive to justify the opportunity given him to ascend the throne of his ancestors.

The traditional ruler also enjoined him to carry his people along and be patient with them.

In his acceptance speech, Oba Kasali expressed happiness for the call to serve as a traditional ruler of the community, saying that he accepted with humility and faithfulness the destiny which had been ordained by Almighty Allah.

The newly crowned king said he was ready to work with everyone to bring development, unity, peace as well as provision of adequate security for life and property.

He appealed to the governor to help the community in tackling the erosion problem that had constituted menace over years in Esure by providing adequate drainage channels to ease the major problem affecting the community.