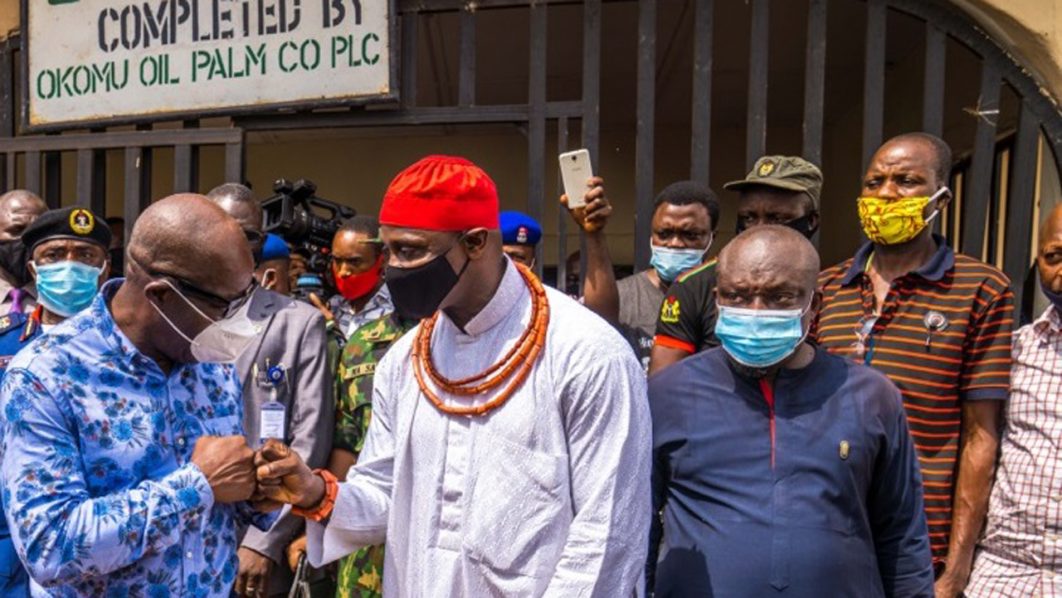 Edo State Governor, Godwin Obaseki, yesterday, cautioned against politicising the herdsmen and farmers clashes in the country and urged nomads to identify the criminal elements among them in the interest of peace.

He said this during a fact-finding visit to Udo, Ovia South-West Council, where he urged the council leadership to re-introduce the weekly stakeholders’ security meeting in the area.

Obaseki stressed that his administration would not politicise security issues, noting that efforts were being made to resolve the issues to provide lasting security to communities in the state.

Speaking at the Palace of the Iyase of Udo, HRH Patrick Igbinidu, Obaseki said: “We are on a fact-finding tour to some parts of the state to access the security situation particularly as it relates to farmers and herders conflicts.

“As a government, we do not believe we should politicise security issues. It is important that we get the facts right and understand what exactly is going on. We had reports about the crisis or impending crisis on this axis.

“We have also had anxieties, but I will call them speculations on social media about herdsmen being pushed from neighboring states into this area and the impending crisis.”

Obaseki, who traced the movement of nomadic herdsmen to climate change, appealed to Nigerians to seek ways of managing herders and farmers’ conflicts rather than politicising the issue.

Responding, leader of herdsmen in the area suggested an investigation of the killings and a database for genuine herders as part of measures to check criminal herders in the area.

Igbinidu, the Iyase of N’ Udo and former Chairman of Ovia North East Council, Joseph Amowie, briefed Governor Obaseki and heads of security agencies on the challenges of farmers and herders and steps so far taken to resolve the crisis.

On his part, Edo State Commissioner of Police, Philip Ogbadu, sued for peaceful co-existence among the locals and cautioned herders to streamline their operations towards ending abuses, as well as the destruction of livelihoods and economic crops.

Speaking on behalf of traditional leaders of Ovia South West, the Duke of Oke-Odighi, HRH Osaretin Akenzua and former Commissioner in Edo State, Monday Osaigbovo, appealed to the state government and security agencies to weed out killer herdsmen from the area.

He also called for the eviction of the criminal elements laying siege on Edo forests and profiling of herders who engage in a legitimate business.

Addressing the stakeholders, including market women and youth leaders, Governor Obaseki allayed their fears and assured them that his administration was committed to securing lives and livelihoods in the state.