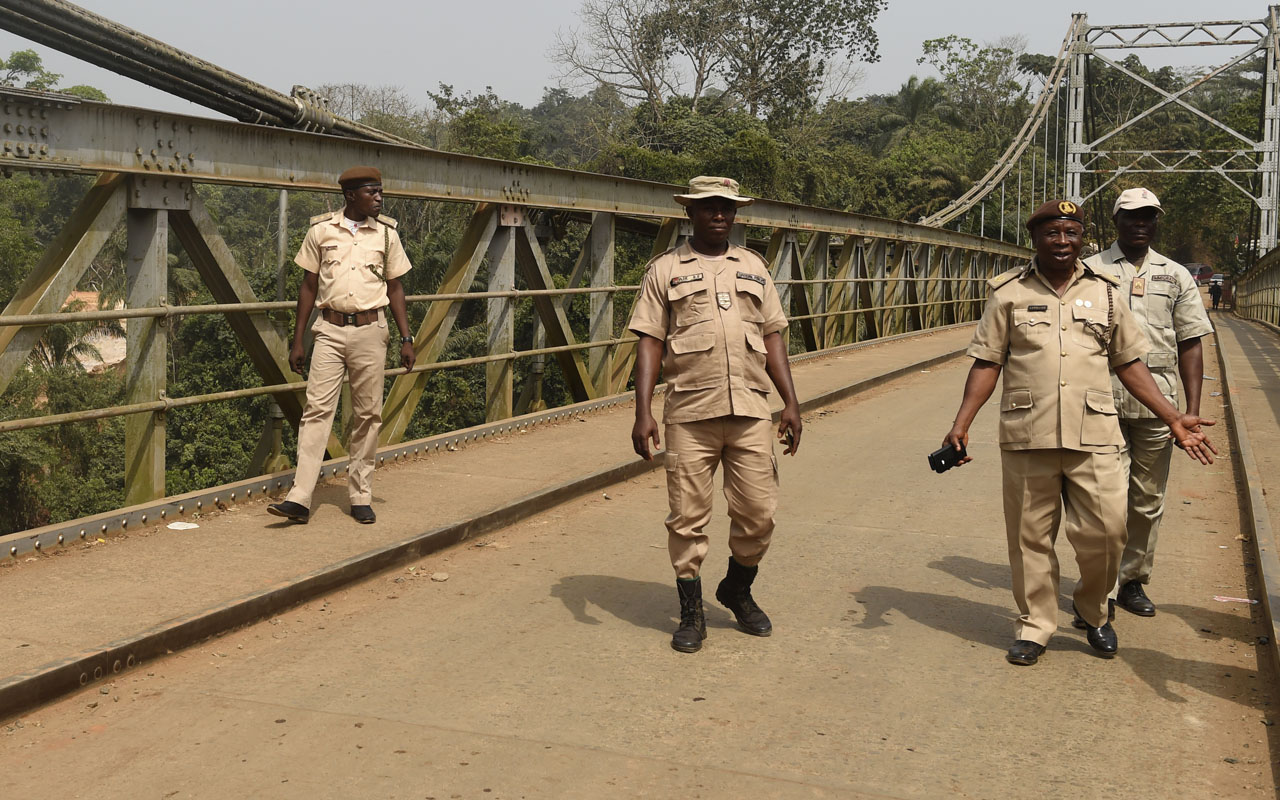 Immigration officers walk on a suspension bridge built in 1948 that connects Nigeria with Cameroon at Mfum border station in Cross Rivers State, southeast Nigeria on February 1, 2018.<br />The UN refugee agency on February 1, 2018 criticised Nigeria for breaching international agreements after the leader of a Cameroonian anglophone separatist movement and his supporters were extradited at Yaounde’s request. Cameroon’s government is fighting an insurgency by a group demanding a separate state for two regions that are home to most of the country’s anglophones, who account for about a fifth of the population. Thousands of Cameroonians fled to the remote border region with Nigeria to escape from the violences in English-speaking southwest Cameroon. / AFP PHOTO / PIUS UTOMI EKPEI

The Minister of Works and Housing, Mr Babatunde Fashola has said the construction of a new double lane bridge on the border between Nigeria and Cameroon will facilitate free trade.

Fashola said this on Monday while inspecting the newly constructed 1.5km, two-lane bridge on the border between Nigeria and Cameroon in Ekot-Mfum, Etung Local Government Area of Cross River.

Funding of the project was provided by both countries.

According to the minister, the construction of the bridge will also strengthen relations between both countries and improve cross-border security.

”This is the first shoot of the harvest of completed projects proposed as the administration enters the second phase of the second term on its way out,” he said.

Fashola said that the administration’s plan to renew and expand old infrastructure would take the two countries to the future for many more decades and strengthen the relationship between them.

“We have had a strong relationship with the Republic of Cameroon in terms of trade and business.

“If you go to Aba, Enugu, and Abakaliki for example, I can tell you that they are on the route that facilitates trade in agro-produce, merchandise, and manufactured goods from Aba in Abia state.

“You can only expect that this will improve joint border patrol, ensure security, more efficiency which you see from the first buildings formed out of the integration of ECOWAS and sister nations of what the continent should look like.

“Nigeria is now a signatory to the Africa Continental Free Trade Agreement. So this is the infrastructure that positions both nations to take the benefit of the trade that the agreement holds.

“It is really exciting. Looking into the future you can only see more business, more trade, and employment meant for people,” Fashola said.

On revenue generation, the minister said that the bridge was a social asset and that the happiness and prosperity of Nigerians was enough payment.

“These are social assets and we must understand that, the recurpment is the happiness and the prosperity of the people of Nigeria.

“The prosperity of the people is the reason why President Muhammadu Buhari is pushing this infrastructure renewal.
“For as long as our people are happy, they can travel easily, they can reduce their journey, safe time on the road because if you save time you save money and am sure the President is delighted,” he added.

Mr Henry Etuk, Chairman, Etung Local Government Area said the people are pleased with what the Federal Government had done.

Etuk reiterated that the new bridge would bring about better trade among the people of Nigeria and Cameroon.
He said that the ease of movement and trade would go a long way to improve relationships and foster development in the area.

A community leader, Mr Victor Njor, commended the government for building the bridge, saying that it would strengthen efforts at ensuring better security because of the joint border patrol.