The National Drug Law Enforcement Agency (NDLEA) has arrested a 43-year-old, Onuoha Friday, with one million capsules of Tramadol on Dec. 10 along Lagos-Benin expressway.

The NDLEA spokesperson, Mr Femi Babafemi, made this known in a statement made available to News Agency of Nigeria (NAN) on Sunday in Abuja.

Babafemi said that operatives of the agency also had two major arrests in Anambra, where a total of 238.973kilograms of assorted illicit drugs were recovered. 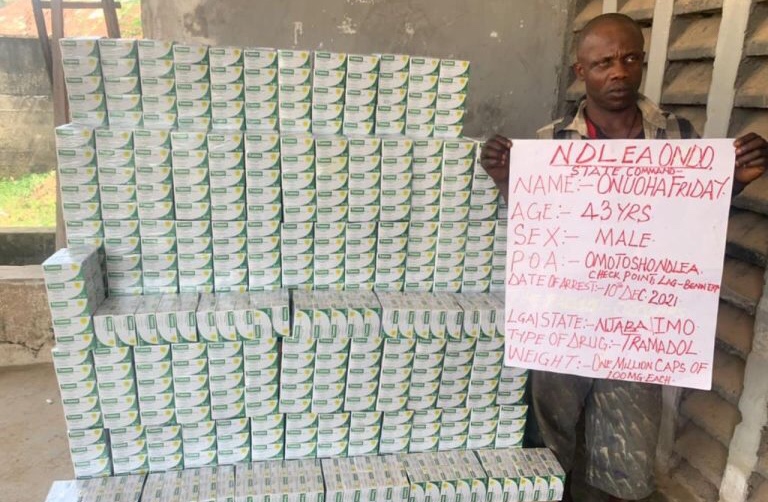 He said that the NDLEA operatives intercepted a truck conveying the illicit drugs at the Onitsha head bridge heading to Delta on Dec. 3.

He said that various quantities of codeine, tramadol, diazepam and rohypnol were recovered from the vehicle and its driver, Obinna Obinwa, was arrested.

“Similarly, on Dec. 8, the agency’s patrol team on Onitsha head bridge intercepted another truck going to Delta with different quantities of assorted illicit drugs while the driver, Lucky James, was also arrested.

“In Delta, raids and follow up operations carried out in parts of the state on Dec. 10 led to the arrest of 17-year-old Abdulkarim Shiabu and 23-year-old Lawal Saidu.

“Both are from Niger Republic, and four others with different quantities of cocaine, heroin, methamphetamine, tramadol and cannabis.

Babafemi said that one Adam Salaudeen was also arrested at Ogori Magongo area in Kogi with 214.7kg of Cannabis sativa.

He quoted the Chairman, NDLEA, retired Brig.-Gen. Buba Marwa, as commending the officers and men of Ondo, Anambra and Kogi states for the arrests and seizures.

According to the statement, Marwa charged them and their compatriots across the country to remain vigilant and resolute in the collective mission to rid every part of Nigeria of illicit drugs.