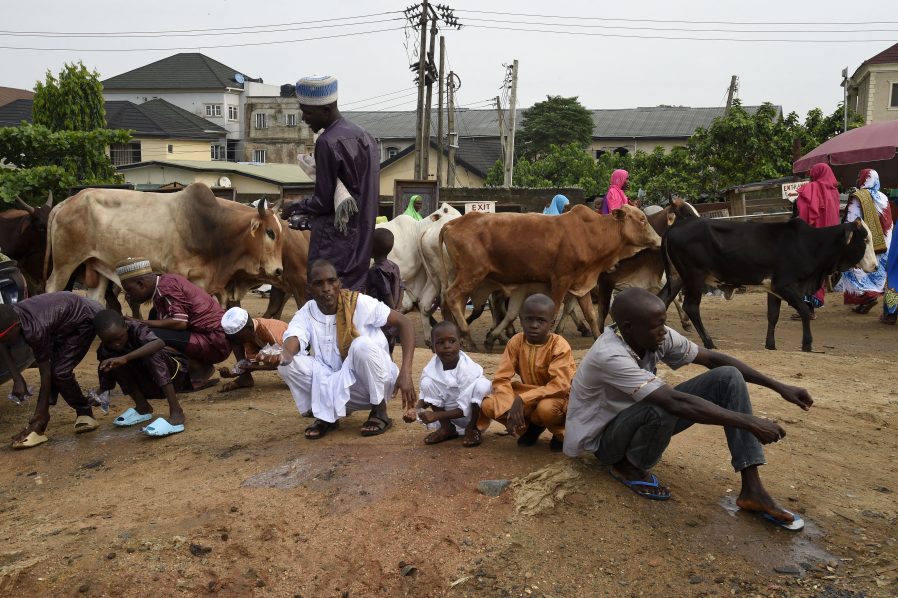 A herd of cows look for an alternative route as the pathway is blocked by herdsmen worshippers washing to pray at Kara Isheri in Ogun State, southwest Nigeria, on May 13, 2021. – Muslim faithfuls across the country joined their counterparts across the world to celebrate Eid-al-Fitr festival to mark the end of the Holy fasting month of Ramadan. (Photo by PIUS UTOMI EKPEI / AFP)

The National Bureau of Statistics (NBS) has been advised to make public the losses incurred per day as a result of public holidays observed in the country.

The Director, Muslim Rights Concern (MURIC), Professor Ishaq Akintola, who gave the advice, yesterday, via a statement, said it is high time the country took a radical look at this angle considering the poor and fragile nature of the economy.

“With a 0.11 Gross Domestic Products (GDP) growth rate and $2,386.90 (2019) per capita income, it is very doubtful if we can afford the luxury of frivolous holiday declarations and revelling in the pay-day euphoria of the prodigal son.

“Our love for holidays and our culture of waste. You cannot separate time from productivity. Time is money and productivity translates to Gross Domestic Products (GDP). This is the time to choose between laziness and productivity. The fascinating products of the West, which we are enjoying today, were results of hard work and sacrifice on a national scale. Our superfluous holidays are simply consuming the future of coming generations.”

The body called on the Federal Government to borrow a leaf from the just concluded 2021 Salah holiday, noting that the last holiday has taught the country a lesson in the prudent management of national holidays, as Nigerian Muslims only enjoyed one out of the two days declared as holidays.

“The last Eid-el-Fitr holiday has taught us a lesson in careful planning and prudent management of holidays. This came because the Federal Government actually declared two days, Wednesday 12 and Thursday 13, 2021 as holidays, having speculated that Wednesday would be the Sallah day, Ramadan did not end on Tuesday. It ended on Wednesday. As a result of this, Thursday became Sallah day. This rendered the holiday declared on Wednesday superfluous, redundant and extraneous.