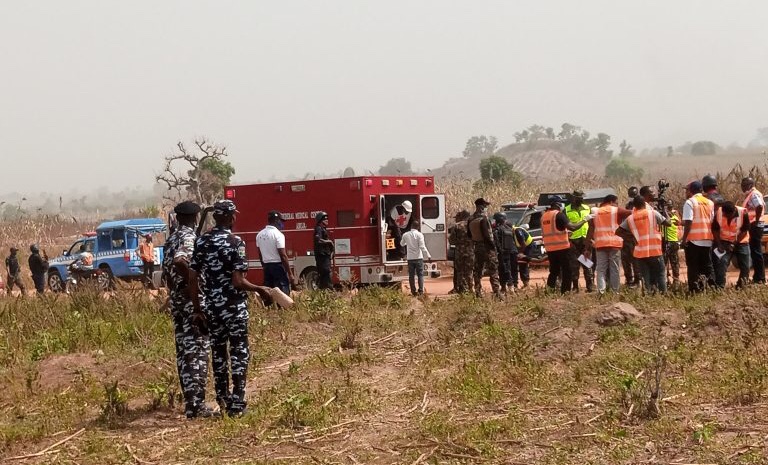 The mock exercise on volcanic eruption for the recertification of Abuja International Airport. Photo/NAN

Capt. Fola Akinkuotu, the Managing Director of NAMA, said the exercise was in compliance with requirements of the International Civil Aviation Organisation
(ICAO).

“This idea was conceived in Accra during the regional meeting. Nigeria is now the number one that did the volcanic Ash eruption mock in Africa.

“Emergency routings and other things were put in place in case there is a heavy volcanic Ash out of the route for the aircraft to follow.

“ The Managing Director, who is engineering this programme through his General Manager in Charge of NAMA Abuja airport, really did the needful with the support of relevant stakeholders,” he said.

The managing director, who described the exercise as a huge success, however said the criticism from the observers would be put into consideration to improve what was on ground.

“What we do in aviation is that we anticipate. We do not have for now any report of volcanic Ash eruption in Nigeria.

“But tomorrow, there can be volcanic Ash. There are many industries here and there. People are mining here and there as well,” he added.

Baazo said the aircraft that was coming from Calabar to Abuja had 13 passengers on board with three crew.

According to him, only one passenger died while the rest are alive.

“ The volcanish Ash affected the engine and the wings of aircraft as well. The aircraft diverted to another route before landed at the bush where the unfortunate incident occurred.

“The mock exercise was activated first when the aircraft was declared as emergency on route TWO by the control tower and the emergency exercise ended about an hour later,” he said.

Baazo stated that the mock exercise was actually a practice on how to handle volcanic eruptions and how it affect aviation basically.

He said the volcanic ash eruption, if it occurred, could cause flight delays for more than many weeks.

He further said that the volcanic Ash eruption could also affect human eyes and skin.

Mr Macel Onwuakpe, the Search and Rescue Mission Coordinator at the airport, said that ICAO normally carried out career audits on airports within their contracting states every five years.

Onwuakpe added that ICAO could no longer wait for five years more before conducting its inspection.

“ICAO conducts its `Continuous Validation Monitoring’ in less than two years, even in less than a year interval.

“This is the first time Nigeria would conduct mock exercise or mock drill on volcanic Ash eruptions exercise,’’ he added.

According to him, the mock exercise is to create awareness and to sensitise people about the impact of volcanic eruptions on aviation itself.