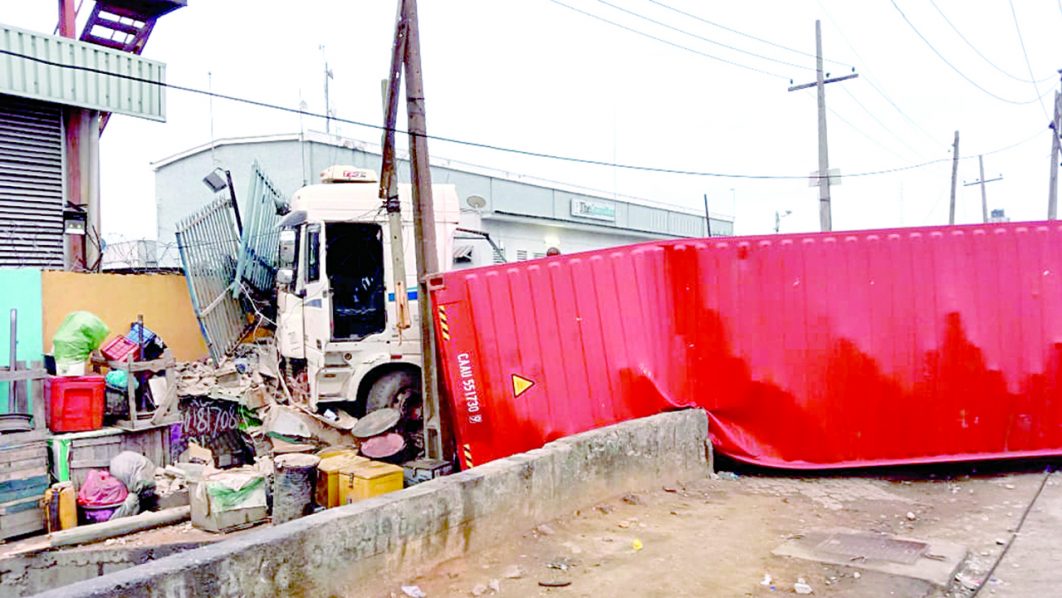 Main entrance of The Guardian after an articulated truck rammed into it, yesterday. INSET: The 40ft container, which the vehicle bore strewn across the gate PHOTO: ENIOLA DANIEL

Fortunately, no life was lost.

The truck, belonging to LA Investment, Ogun State, destroyed the front gate of The Guardian and brought down the company’s fence.

An official of Lagos State Traffic Management Authority (LASTMA) blamed the contractor handling the repair of the burnt link bridge for the accident. He said the contractor should have placed warning signs of road closure and light up the area properly.

He said: “The diversion was not properly done by the construction company. The company should have given notice about 500 meters away from the site to give way to free flow of traffic around the Toyota axis.”

Similarly, on Friday, a trailer hit and destroyed three electric poles close to The Guardian, barely 24 hours before yesterday’s accident, which occurred at about 4.30 a.m.

The Lagos State Emergency Management Agency (LASEMA) removed the fallen container at about 9:30 am.

Meanwhile, eight months after the Airport Link Bridge was closed to vehicular traffic, due to a fire incident, which happened after a tanker loaded with 33, 000 litres of diesel exploded, damaging the bridge pillar, the contractor, Plycom Nigeria, has returned to the site again.

The contractor initially started work on the section of the bridge damaged in June, which was six months after the bridge was closed, only for the company to stop work after a week. They returned, yesterday, over a month after it initially moved to the site. But its return has continued to inflict pains on motorists and commuters, as proper traffic management has not been put in place for easy flow of traffic around the axis.

This is in addition to poor traffic management on alternative routes provided by the government for motorists and commuters heading to Airport Road.

The Federal Controller of Works in Lagos, Mr. Olukayode Popoola, said traffic diversion due to the repairs began on Friday, August 13 and would end on September 22.

Popoola said traffic on Apakun axis on Oshodi Expressway would, today, be diverted to Ladipo service lane and Airport Road for three days, adding that repair works would begin on August 16.

“From August 16, the carriageway will be narrowed to two outer lanes, so that the contractor can carry out the jacketing of the pier. This will last for five weeks, from August 16 to September 22,” he said.

In a related development, there was another road crash involving a truck at Maryland Bus Stop, along Ikorodu Road in Lagos.

An eyewitness said the accident occurred at about 7.00 a.m. and though there was no casualty, it caused a gridlock along the axis.

It was claimed the accident was caused by brake failure. LASTMA officials were on the ground to control the traffic.