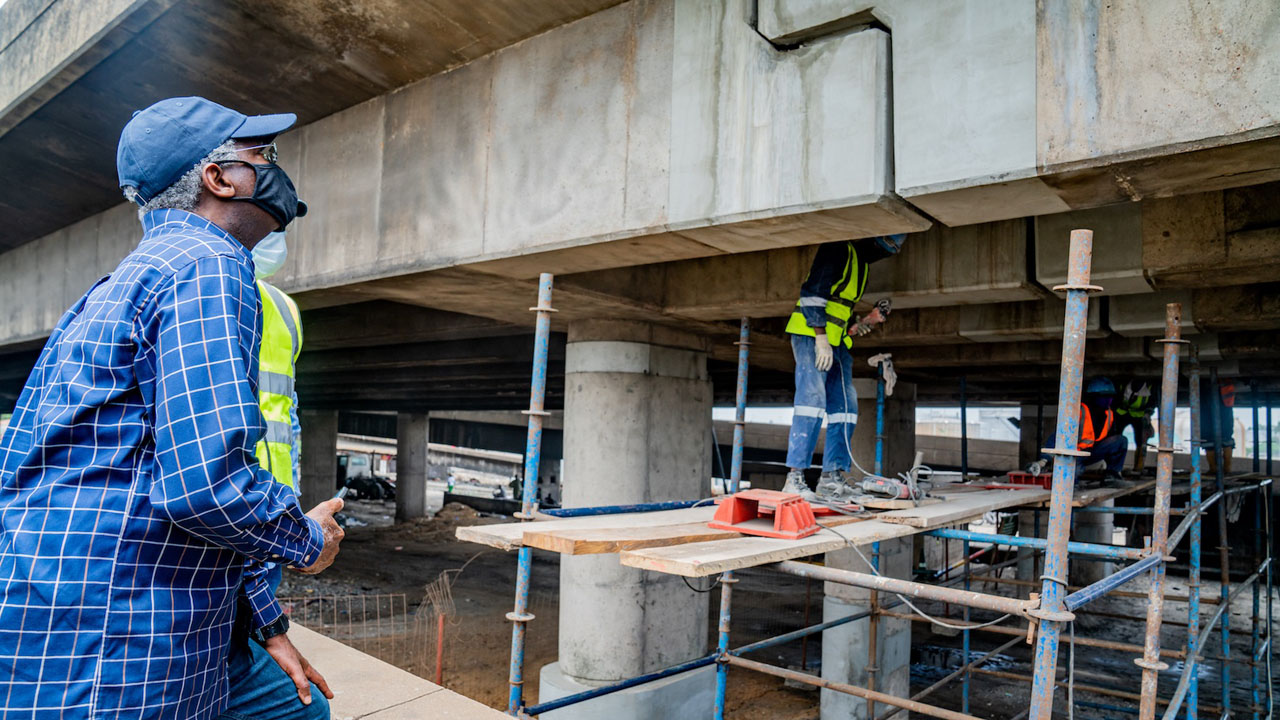 Repair works on the Eko and Marine Bridges is part of the ongoing Federal Government’s Bridge Maintenance Programme. Photo: TWITTER/FMWHNIG

Some motorists plying the Marine Bridge in Apapa, yesterday, expressed optimism that the ongoing repairs of a section of the facility by the Federal Government would enhance traffic flow in the area and strengthen the lifespan of the bridge.

They, however, advised the contractor handling the project to ensure quality work that would stand the test of time.

The government, on March 9, 2021, announced partial closure of the bridge for emergency repairs.

The Federal Controller of Works, Olukayode Popoola, said the rehabilitation work would cover a stretch of 350 metres on the CMS-bound lane, adding that the scope of work would also cover a total of 60 bearings and 14 expansion joints which would be replaced alongside the removal and replacement of bad asphalt.

He disclosed that the repair was the continuation of the rehabilitation work started last year.

“We are not closing it totally. Where we want to work is the outward Apapa-bound lane,” he said.

Motorists going inwards Apapa are expected to make use of Total underneath the bridge to connect Naval Dockyard to Danlami to Leventis corridor and/or to connect Marine Beach by Mobil through Federal Fire Service/Obanikoro to Naggaf/North Avenue to Wharf Road.

A visit to the area yesterday revealed that the repair work had taken off; the road users welcomed the development, describing it as timely.

There has been heavy traffic since Monday, on the Oshodi-Apapa expressway, and from Ijora-Apapa to Area B, inward Nigerian Ports Authority, which was shut down due to high volume of tankers in the area.

Sources told The Guardian that the development was worsened by alleged pack up of the e-call system machine initiated by the Nigerian Ports Authority. The truck drivers refused to move to the designated satellite truck parks meant to house the vehicles before they are called to pick up products.

A tanker driver, Ramon Aliyu, also lauded the government for initiating the repair at the outbound section of Apapa. He said the planned project would ensure smooth driving in the economic nerve centre of Lagos.

“It may bring pains but the road users will have to adjust to the situation since it would bring improvement later,” he said.

An engineer, Dr Ombugadu Garba, said the move to repair bridges across the state shows that the government had braced up to its responsibility, especially on regular maintenance of infrastructure.

He noted that the bridge was not designed for heavy loads but there have been many trucks and tankers with loads plying the facility. This, he said, must have negatively impacted the bridge especially in the joints.

“Bridges need constant maintenance to check if there are weaknesses. However, when you don’t do that as at when due, it would have an overbearing effect on the structure.”