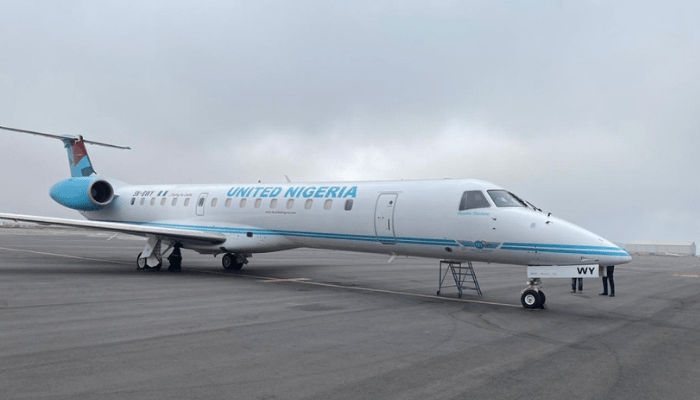 Nigerian passengers who wish to travel by air from one State to another now have more choices as United Nigeria, a new domestic airline with operational hub in Enugu state, last week commenced flight operations.

The airline which commenced operations with four aircraft will be operating to Lagos, Abuja, Enugu, Asaba, Owerri and Port Harcourt while it plans to expand to other destinations soon.

This is as Akanu Ibiam International Airport Enugu, is seeing a 600 percent increase in passenger traffic.

Speaking during the ceremony to mark the inaugural flight in Enugu, Obiora Okonkwo, chairman of United Nigeria said he observed a gap in the industry which was one of the reasons the airline chose Enugu it’s operational hub.

Okonkwo said Enugu state government will give the airline the encouragement adding that the airline is driven by service to the industry and service to mankind.

He said his short term plans are to consolidate and establish all it’s routes and the airline hopes to expand beyond Nigeria, starting from the West Coast.

Speaking on how prepared he is for the competition, he said, “Well, we are in. I guess those who are in the business should be competing with us first. We should be the people they should be worried about because we are new. We think that within the next three months we shall be able to expand our routes.

The chairman said the market is huge and there is need for a lot of aircraft.

“It might surprise you to know that we have full load in all the routes we have operated this morning. Today is the first day of our service so that is good and it shows what will happen,” he disclosed.

Chika Adeyanju, station manager for United Nigeria said the airline decided to use Enugu as its operational base because of the airline’s resolution to unite Nigeria and make a difference in the industry.

“We noticed that most airlines have their operational base in Abuja, so we wanted to make a difference, so we decided to start from Enugu so that things will be normalised and equalised,” Adeyanju said.

She said air travel will continue to grow in Nigeria because it is easier for people to move from one place to another by air, and as more airlines spring up, it denotes healthier completion and better choices for passengers.

“We are United Nigeria, flying to unite. We want unity, peace and on-time travel. Our unique selling point will be safety and on-time departure.

“We have four aircraft and some more will come soon. Since we are starting with domestic, it is viable for us to start with small aircraft. As time go on, we will be having up to four or five flights into Enugu, she said.

Cecilia Oguama, terminal manager, Akanu Ibiam International Airport, Enugu said the airport management is happy that United Airlines has commenced operations and assured that if the airline creates enough awareness, they will have enough passengers.

“The traffic in and out of the airport has increased tremendously. We are now having between 6,000 and 7,000 passengers weekly. Before COVID-19, we had less than 1000 passenger traffic because we had only one airline then.

“In 2019, we only had Air Peace operating but now we have four others operating regularly including United Airline. We have close to eight flights daily and United Airline has made Enugu their base, so they would enjoy tremendous support from the airport. Cargo movement has not started yet because the international terminal hasn’t opened for o per at ions,”ogua ma said.

Ugwuanyi who was represented by Malachy Okwueze, deputy chief of Staff, government house, Enugu congratulated the company, particularly, the chairman of United Nigeria for the giant feat.