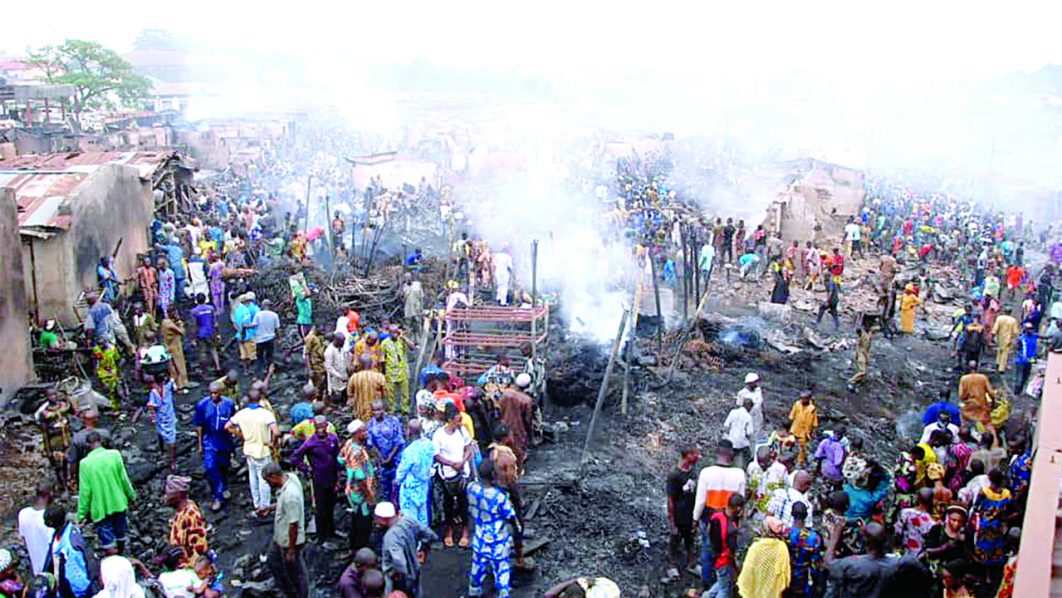 Goods worth hundreds of millions of naira were, on Friday night, gutted by a fire incident, which razed down dozens of shops at the Araromi Auto Spare Parts Market, at Agodi-Gate, Ibadan, Oyo State.

Eyewitnesses revealed that the inferno started at about midnight. It was still on at noon on Saturday when The Guardian visited the scene.

Even though distress calls were made to the Oyo State Fire Service, the timely response of the firefighters could not stop the inferno, as access roads to the fire scene were blocked by spare parts cleared from some shops.

Consequently, the two teams of firefighters had to set up and operate from afar. Their efforts yielded little dividends as the water hoses could not get to the scene.

A trader who simply identified himself as Samuel confirmed that the fire escalated because the fire service could access the market.

By the time the access roads were cleared to allow the fire trucks access, the inferno had raged for eight and half hours.

Some of the traders claimed that the inferno was caused by a power surge in one of the shops, adding that the electricity supply to the market had just been restored after years of blackout.

Ayobami Adeosun, a trader said: “I was called around 11:30 pm on Friday that there was a fire outbreak in the market. By the time I got there, goods worth millions of naira had been burnt. My boss lost goods worth not less than N7m to the inferno.”

A resident of Agodi-Gate, Pelumi Abdullahi, said: “My Uncle’s shop is among the burnt ones. Everything he had in the shop was burnt to ashes. He is betraying emotion now. He does not know where to start from.”

Speaking on the incident, the Oyo State Fire Officer, Mr. Moshood Adewuyi, said: “The incident started overnight but we are glad that there is no casualty. Currently, we cannot give the number of shops that got burnt because many of the access roads leading to the market were blocked.”

Iheanacho Gets Highest Rating In Leicester vs Crystal Palace Draw