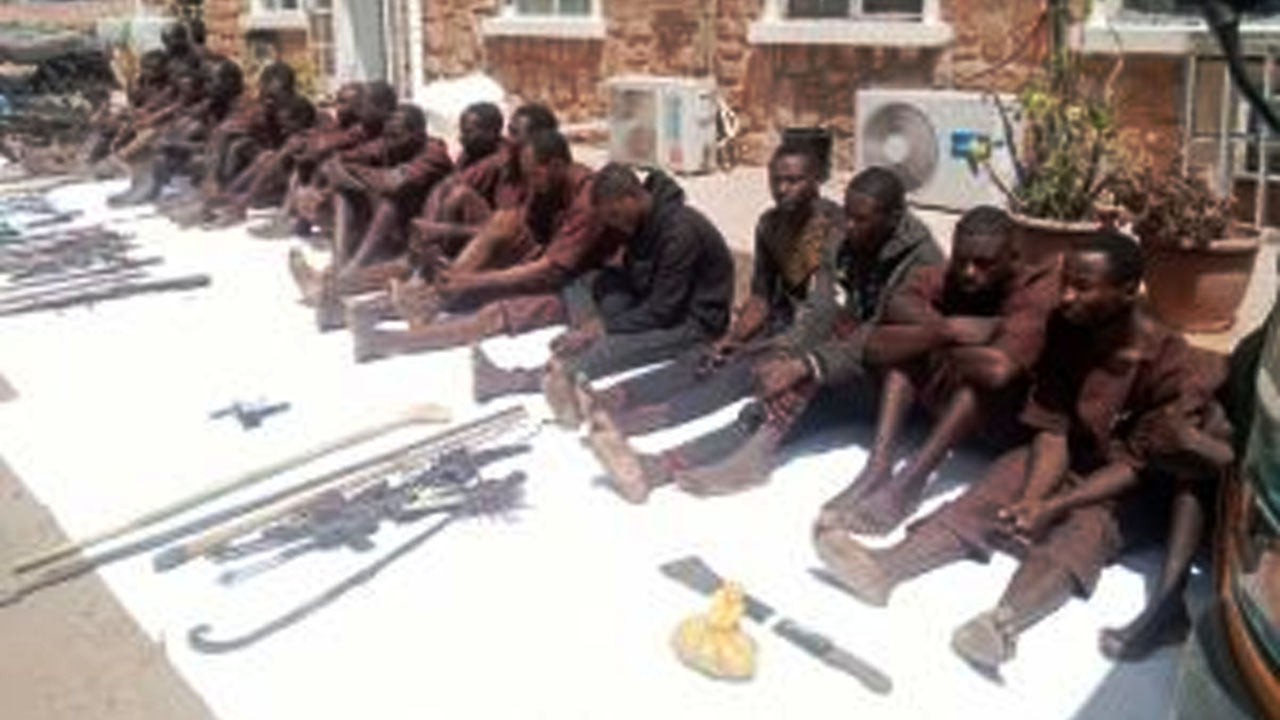 A cross section of the suspects PHOTO: NAN

The Commander of the task force, Maj.-Gen. Dominic Onyemelu presented the suspects to newsmen on Thursday in Jos.
Onyemelu said the arrest was part of the task force’s renewed vigour to stem down criminal activities in all areas of its joint operations.

“It is a known fact that an appreciable level of the peaceful environment which we are experiencing in Plateau and other areas of our operations can be attributed to the renewed vigour which our troops have been conducting their operations.

“The stringent measures adopted have incrementally curtailed and contained various criminal vices that have the propensity to derail the achievements attained so far,” he said.

He explained that among the suspects, 17 were allegedly involved in kidnapping, four for armed robbery and the remaining two for illegal possession of firearms

“On February 24, own troops in conjunction with personnel of the National Drug Law Enforcement Agency (NDLEA) on routine patrol along Shendam-Lafia road in Shendam Local Government Area of Plateau, intercepted a passerby, one Mr Wisdom Dunyel, with a Harrisburg pistol loaded with seven rounds of 9mm ammunition.

“Also, on March 16, we received a distress call on an attempted kidnap of one Alhaji Gambo Yawuro at his residence in Lishin, Jengre community in Pengana, Bassa local government area.

“Troops in collaboration with the members of vigilante and locals foiled the attempt and arrested these 17 suspects.

“The 17 kidnap suspects, who arrested alongside 7 motorcycles, a locally fabricated rifle, two live cartridges, 13 cutlasses, 3 daggers, 15 cell phones and assorted charms, are from Kaduna, Bauchi, Plateau and Kano states.
“Similarly, on match 22, our troops responded to a distress call of an ongoing robbery operation along Haske-Lamingo in Jos North local government area of Plateau.

“Troops swiftly responded and arrested four members of the syndicate group who robbed a lady and threw her out of a moving tricycle,”the commander said.

He said the suspects had been investigated and would soon be charged to court.

He assured members of the public of the commitment and determination of the task force toward ensuring the return of lasting peace to Plateau and other areas of its operations.

“I wish to reiterate our mandate which is geared toward restoration of permanent peace, as we continue to operate professionally with other security agencies to eliminate all acts of criminality in the society,” Onyemelu said.

He, however, called on citizens to support and collaborate with the task force in its bid to ensure lasting peace is achieved in the society.