Mathematical: Probably The Tallest Basketball Player In The World – The Story Of Abiodun Adegoke! 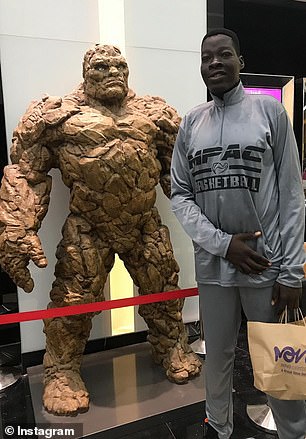 I checked Wikipedia before writing this article. I wanted to know the tallest player in NBA history.

Some years ago, a gentleman in Ibadan contacted me about a young boy who needed the support of sport to save his life.
The man told me the boy was about 16 or 17 at the time and that he was divinely physically made for the game of basketball, because he was over 7ft tall! That ‘arrested’ my full attention.

The gentleman also told me the boy had not been able to attend school for over a year as a result of the ‘bullying’, harassment and embarrasing stares he suffered on the streets of Ibadan.
Abiodun Adegoke was in SS2 when he stopped schooling, and stayed indoors most of the time. He became physically bent over as a result of crouching indoors to prevent his head from being chopped off by the blades of the ceiling fan in their rented modest, ‘room and parlour’ accommodation that he shared with his siblings and very worried parents.

Abiodun was living a miserable life by the time I sent a camera crew to go to Ibadan, interview him and confirm the story.
My crew came back with an incredible story and pictures that excited me. I immediately contacted the boy’s family, visited Ibadan myself, met with him at the DAWN Commission office at Cocoa House, spoke with the stradling ‘giant’ and convinced him to leave the embarrasing stares of Ibadan and to relocate to the quiet seclusion of Wasimi Orile, where he would revive his pursuit of a great education, pursue a life in basketball, and live amongst youngsters like him who would respect and even rever him for his incredible gift of nature. I told him he would be venturing into fascinating new possibilities and a new life ahead. I told him it could be a complete adventure into a new world depending on what he does.

He was fascinated. He had never been told such things before. He thought he was worthless and a freak of nature. But he believed and accepted my offer and took the calculated step of enrolling into the Segun Odegbami International.College and Sports Academy, SOCA, on a full scholarship offered him by the academy.

Within weeks he had relocated to the serenity of the Segun Odegbami International College and Sports Academy, SOCA, and started a new life. We measured his height. At about 17, he was 7ft 2 inches tall.

It took only the very first introductory meeting with the other students of the academy for Abiodun to become a completely changed boy, his timidity and shyness evaporating forever.
He became a star in the school. I told the other students that they had as a co-student a giant that would one day become the toast of the World like legendary megastar Nigerian, Hakeem Olajuwon.

I told them Hakeem’s story, how his ’embarrassing’ height as a young boy became his greatest asset later in life, and how it made him one of the greatest and most successful Africans in NBA basketball history.

I told the students how Hakeem returned to Nigeria after achieving greatness in the US, many years later, and how the whole country stood up and stood still to welcome him. I told them about how many mothers started to wish and to pray to have a ‘giant’ as a child and become another ‘Hakeem the Dream’.

By the time I finished with the students
Abiodun Adegoke had become a megastar on the SOCA campus. His confidence shot sky-high. Every student wanted to be his friend. His status rose in the school and his leadership skills started to bloom. He started to walk in public with an uncommon confidence.

He could feel it too from the way the students gravitated towards him and respected him that he was on course to become a future head boy of SOCA. Then there is the interesting matter of Abiodun’s shoes. The only shoes he had coming to the academy were a pair made from truck tyre. His size was not available anywhere. He wore his ‘tyre-shoes’ everywhere he went. The only time he took them off was to play basketball, barefooted.

I tried to get him size 53 shoes during one of my trips to the UK. No sports stores stocked shoes in those giant sizes.
I finally got Olumide Oyedeji, the legendary Nigerian basketball player in the NBA who had returned to the country, to help me source for a size 53 basketball trainers. Olumide came back from his US trip and only managed to get a size 50 pair of shoes.

He too could not find size 53 in the US. You don’t find shoes of such large sizes in the shops. You have to arrange specially hand-made versions. Fortunately, Olumide had the good sense to come back with a pair of the only size-50 of training shoes he found.

That was the best gift Abiodun ever received in his life – proper sports shoes that were too small for his feet.
By the following morning, in his hostel room, his mates went round the school relating the story of how Abiodun had spent the night expanding the shoes and trying to force his feet into them by all means. By day-break they found him happily dancing, his feet ‘trapped’ in the tighest fit possible in the shoes.

A strange relationship, thereafter, developed between Abiodun and those shoes. For the next few months, until he ‘disappeared’ from SOCA, the shoes hardly ever left his foot. He wore them everywhere. He wore them to class, to the running tracks, to travel, and to the basketball courts, and so on.

His physical fitness and basketball skills improved tremendously. He was training in the academy under former national team coach Alabi Adelanwa, so his northward development was very fast in his first year in the SS2 Class where he resumed his studies. Then came 2016, his final year in SOCA. He was preparing for his WAEC exams.

We had contacted several college coaches in America through Sam Okpodu, my friend, a football coach in the US and told them about the raw diamond in our academy. We were recording and compiling several of the basketball matches he was playing for SOCA.

Several of the US College coaches had their antenae in SOCA, monitoring and waiting for Abiodun to complete his secondary school education and sit for his Scholastic Aptitude Test. He was a bright student. He would have passed both in flying colours. He was a sure bet for a scholarship into an American college.
A few weeks to WAEC, when students went home for the Easter break preparatory to returning to face the exams, Abiodun did not show up in school.

All effort to get across to him failed. He was not picking calls anymore. We knew something was wrong. I sent emissaries to his home in Ibadan. There was now a different ‘cool’ attitude.
Through the gentleman that first introduced me to the young lad, we eventually learned that some sports agents had come and convinced Abiodun to go with them to the Middle East for a professional career in basketball. He abandoned school in his final year and travelled abroad with them.

Some months later, he actually sent pictures of him in Qatar to the school. It was a big relief to have learnt that nothing bad happened to him.I never heard again about him.
Well, all of that was some years ago.

Last week, Abiodun Adegoke came back from the cold. He was on several social media platforms. The news about him is all good. He is now 7ft 9 inches tall, probably the tallest basketball player in the world. There was a video of him dunking the ball without jumping.

Even the great Shaquill O’neale, I am told, has seen his pictures, and is fascinated with what he saw, and has commented positively on Abiodun’s potentials. I am also told that several American basketball coaches in the NBA are making enquiries and asking questions about him. They may be interested to have him grace the courts of the NBA.

Age is on his side. At 21 or 22 now, he still has a whole lifetime ahead to impact the world of basketball and the NBA, the biggest basketball league in the World. Should that happen he would become the tallest basketball player in the history of the NBA, and his name will be written in gold, forever. All of us in SOCA are holding our breaths, praying and wishing him well on his ‘journeys’.