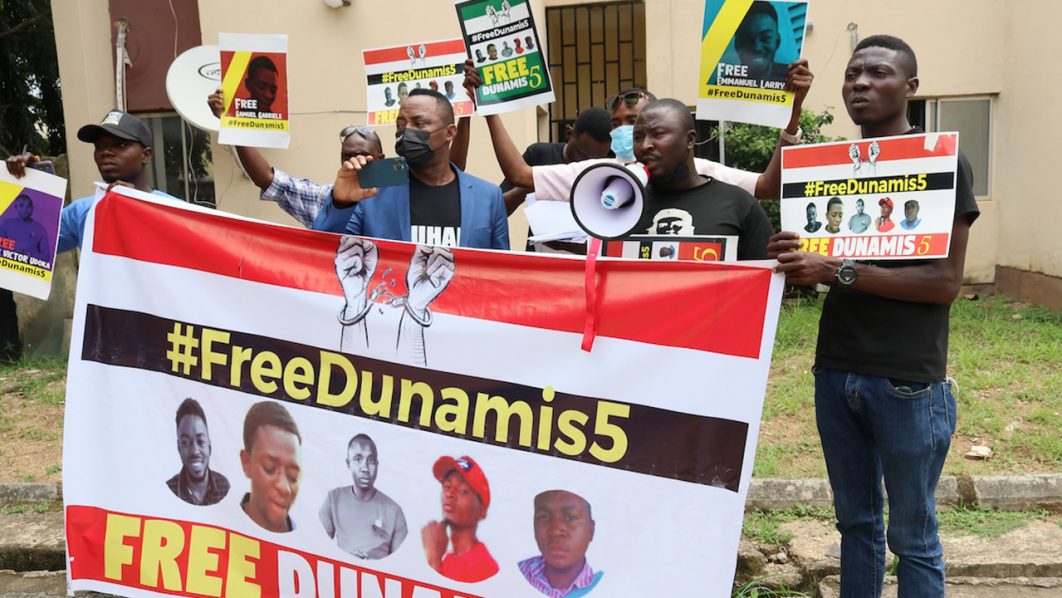 Activist and Publisher of Sahara Reporters, Omoyele Sowore (third right) and others protesting against alleged illegal detention of five churchgoers arrested at Dunamis Church in Abuja…yesterday.

Human rights activist and pro-democracy campaigner, Omoyele Sowore, has threatened another mass protest if some youths arrested for wearing ‘Buhari Must Go’ T-shirts to a Sunday Service at Dunamis International Gospel Centre Headquarters in Lugbe, last Sunday, are not released within seven days.

Those arrested and detained by the Department of State Services (DSS) are Emmanuel Larry, Henry Nwodo, Samuel Gabriel, Ben Manasseh and Anene Udoka. They wore T-Shirts with the inscription #BuhariMustGo to the church and were picked up by DSS operatives.

Sowore, at a press conference organised in Abuja, yesterday, by a group called ‘Take It Back Movement’, also alleged that the General Overseer and Senior Pastor of the church, Pastor Paul Enenche, collaborated with the DSS to effect the arrest of the persons.

According to him, “the church has allowed itself to be used by the President Muhammadu Buhari administration, which he described as despotic.

“The church should be a refuge for the oppressed and not a collaborator with oppressors. We are urging the church since it handed over the five persons to the DSS to tell them to release the detainees,” he stated.

Earlier, Damilare Adenola of the Take It Back Movement, who presided over the press conference, accused the Buhari administration of “heinous violation of the rights of Nigerian citizens.”

“Aspart of our commitment to the fight against injustice as a group, we use this opportunity to also condemn the regime for its acts of heinous violations of the rights of Nigerian citizens who are agitating for the respect for people’s rights to life, dignity and self-determination rights, such as the case of Nnamdi Kanu, who was tortured and unlawfully repatriated from Kenya; Sheikh El-zakyzaky, whose arbitrary detention has spanned over 2000 days; Oduduwa republic agitators, whose house was invaded and resulted in the extra-judicial killing of two persons and continued illegal detention of 13 persons and #EndSARS activists wallowing in illegal detention.

“It should be noted that human rights are sacred under the law and they remain guaranteed and protected. We, therefore, call for the immediate and unconditional release of all these individuals and those not mentioned but who are facing unjust punishment. To reiterate, if these releases however are not done in the next seven days, a mass nationwide protest would be called to compel the regime to heed the voice of justice,” the group said.

The group announced that it had filed a court process for the enforcement of the fundamental human rights of the detained persons.

The suit, according to Adenola, joined the DSS Director-General and Pastor Enenche.

The group described the arrest and continued detention of the five persons as completely illegal and crude.

“For the records, it is important to state that since the unfortunate event, the detained young people have been denied access to their lawyer and close family members, even though they have not committed any offence known to the laws of Nigeria

“You would agree with us that the arrest and continued detention of these courageous young people have no basis in law and are a contravention of their fundamental human rights to freedom of expression, assembly and freedom movement as guaranteed under Sections 39, 40, and 41, respectively, of the Nigerian constitution and other international conventions and treaties to which Nigeria is a party to,” Adenola added.

When reminded that a Bill is being processed in the National Assembly that may outlaw ‘unlawful’ protests, the group said no such law could be passed because it would contradict the provisions of the constitution.

“Nobody can criminalise protest because the constitution allows it. I can tell you that any such law will be null and void because of its contradiction to the Constitution.

“Protest is a democratic right across the world and I am sure that Nigerians are waiting for the Bill to be thrown into the dustbin of history,” Adenola stated.

Also, the Executive Director, Socio-Economic Rights and Accountability Project (SERAP), Adetokunbo Mumuni, condemned the Bill, saying: “I don’t think that bill can stand the test of legal scrutiny if passed into law, because that bill is an attempt to gag the right to freedom of expression of Nigerians. That law cannot stand in case it is passed. It is not possible to tell protesters that you will be jailed if you protest.

“Protesting is the right of every citizen and their way of expressing an opinion in respect to issues they don’t feel comfortable with. The idea of a protest, once it is not violent, is allowed and must be allowed in any democratic society. So, sentencing someone to five years imprisonment for this is an attempt to gag and contain the freedom of Nigerian people to express their opinion without affection or ill will. That is the way I see it. If it is challenged, it cannot stand the test of the legal contest.”

Speaking in the same vein, a former Senator from Kaduna Central Senatorial District, Shehu Sani, condemned members of the House of Representatives for proposing a bill to imprison ‘unlawful’ protesters.

Sani, who spoke with an online medium, yesterday, said it was another step to register tyranny against people, adding that members of the Lower Chamber were enjoying democracy got on a platter of many protests against the military dictatorship.

“That bill is nothing but a step towards institutionalising tyranny and oppression in Nigeria. It is condemnable and unacceptable that an institution of democracy like the House of Representatives will craft a tyrannical bill that is trying to suppress the fundamental rights of the people who want to organise themselves and protest against injustice and oppression.

“It is disappointing that democratically-elected representatives of the people are using the democratic platform as an institution to build an edifice of oppression.

“They need to understand that it is the culture and practice of protest that freed Nigerian from the military dictatorship that made it possible for democracy to thrive in this country and also for them to enjoy it as representatives of the people,” Sani said.

However, the sponsor of the Bill, Emeka Chinedu Martins (PDP, Imo State), in a statement, clarified that the intention of the bill was being misunderstood and misconceived.

His words: “The caption of the Bill that went viral was never my intent or opinion, neither was it an embodiment of the Bill I sponsored that passed the first reading on the floor of the National Assembly on Tuesday, July 6, 2021, hence, a clear case of misunderstanding, misconception and misrepresentation of the facts.

“As a representative of the people, whose political ideology is rooted in democratic tenets, I can never be a party to a system that seeks to stifle or cripple dissenting voices whose right to freedom of assembly, expression and protest is guaranteed by the combined effort of section 39 and 40 of 1999 Constitution as amended, as well as Article 11 of the African Charter on human and People’s Right to freely Assemble.

“While I urge Nigerians to imbibe the culture of reading beyond newspaper caption in order to comprehend the body of a message, it is imperative to put the record straight, in order to douse tension and allay the concerns of my teeming adherents.

“The Criminal Code Amendment Bill, 2021, did not talk about criminalising protest or protesters in Nigeria, rather, it is a Bill that proactively seeks to preserve life and protect the killing of the innocent through mob action, known as “jungle justice” in our local parlance.”

The bill, titled ‘An Act To Amend The Criminal Code ACT, CAP 38, Laws Of The Federation Of Nigeria, 2004 To Further Preserve The Sanctity Of Human Life And Property, And To Provide Specifically For Mob Action, Prescribe Punishment And Other Matters’, passed through the first reading last Tuesday.

The proposed Act, provides in part, as follows: (1) The provisions of the Criminal Code Act, (in this Bill referred to as the “Principal Act”) is amended as set out in this Bill (2) Substitute for Section 69 of the Principal Act, a new section 69”.

“Definitions: Unlawful assembly, Riot, Mob action (a) When three or more persons, with intent to carry out some common purpose, assemble in such a manner or, being assembled, conduct themselves in such a manner as to cause persons in the neighbourhood to fear on reasonable grounds that the persons so assembled will tumultuously disturb the peace, or will by such assembly needlessly and without any reasonable occasion provoke other persons tumultuously to disturb the peace, they are an unlawful assembly. It is immaterial that the original assembling was lawful if, being assembled; they conduct themselves with a common purpose in such a manner as aforesaid.”