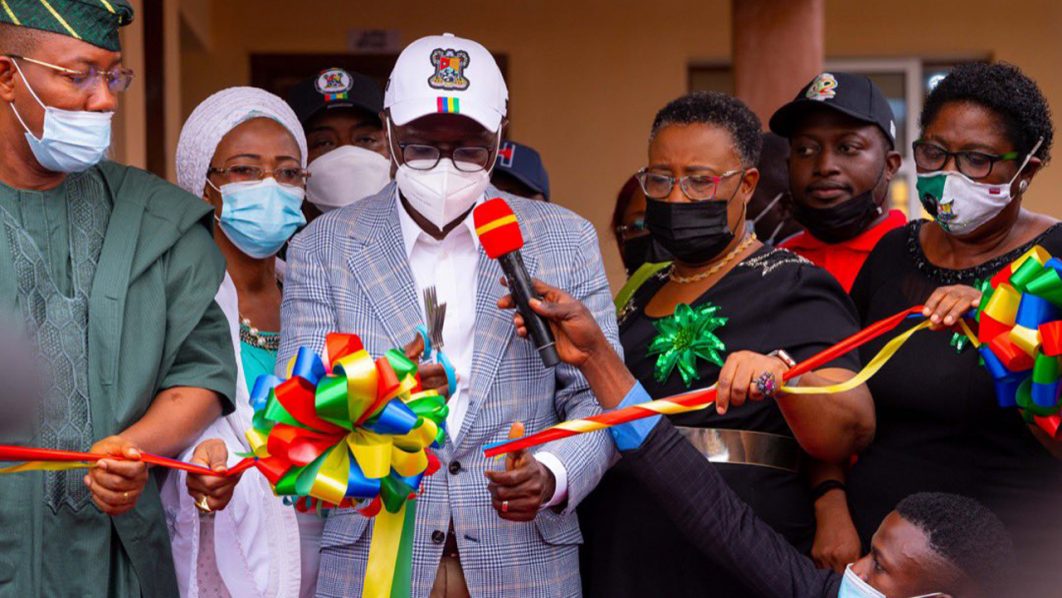 Sanwo-Olu stated this during the inauguration of 14 classrooms in UBE Primary School. Photo/TWITTER/JIDESANWOOLU

Lagos State Governor, Babajide Sanwo-Olu, has identified education as the most veritable tool for wealth creation, stating that huge investment in the sector’s infrastructure was yielding positive result in students’ performance.

Sanwo-Olu stated this during the inauguration of 14 classrooms in UBE Primary School and Community Junior Academy, Odo-Ayandolu schools in Ikorodu Council area of the state.

The governor, represented by his Special Adviser on Works and Infrastructure, Mrs. Aramide Adeyoye, said huge investment in infrastructure and current technological trends had put students and pupils in public schools in the state in the lead of academic excellence in Lagos and the country.

He said students’ performance had improved in local, national and international examinations and competitions, as well as in morals, etiquette, and confidence in public speaking.

He said Lagos State public schools had consistently emerged the overall best at the international Robotics Competitions since 2015 and had continually represented Nigeria.

Sanwo-Olu listed various local, national and international competitions where pupils and students from Lagos State public schools retained leading positions as confirmation of the improvement in quality and standard of education in public schools.

He commended the hard work and commitment of the competent teachers, which in addition to infrastructure, made the success stories possible.

Sanwo-Olu advised children to continue to study hard to justify the government’s investment in education while assuring parents on continued quality education delivery.

He said the government had begun an aggressive education infrastructure regeneration and renewal with modern equipment facilities, and security across the state and had inaugurated projects in 20 councils.
“We have so far completed over 1,097 projects covering 970 schools across the state. In the last two years, our government has ensured the prompt construction and rehabilitation of 322 dilapidated public schools, while 87,000 dual composite units of furniture were supplied to primary and secondary schools across the state,” he said.

Principal, Community Junior Academy, Odo-Ayandolu, Mr. Moshood Adeyemi thanked the government for the project and while giving a brief history of success stories of the school, appealed for perimeter fence to make the environment safer. Also, the headmaster of the primary section, Mr. Kehinde Adeleka, requested additional classrooms to cater for the population growth of the school.

The traditional ruler of the area, Oba Ganiu Asunmo, represented by High Chief Onabanjo Olisa, appealed for additional intervention in other secondary schools in the area whose infrastructure were already overstretched.