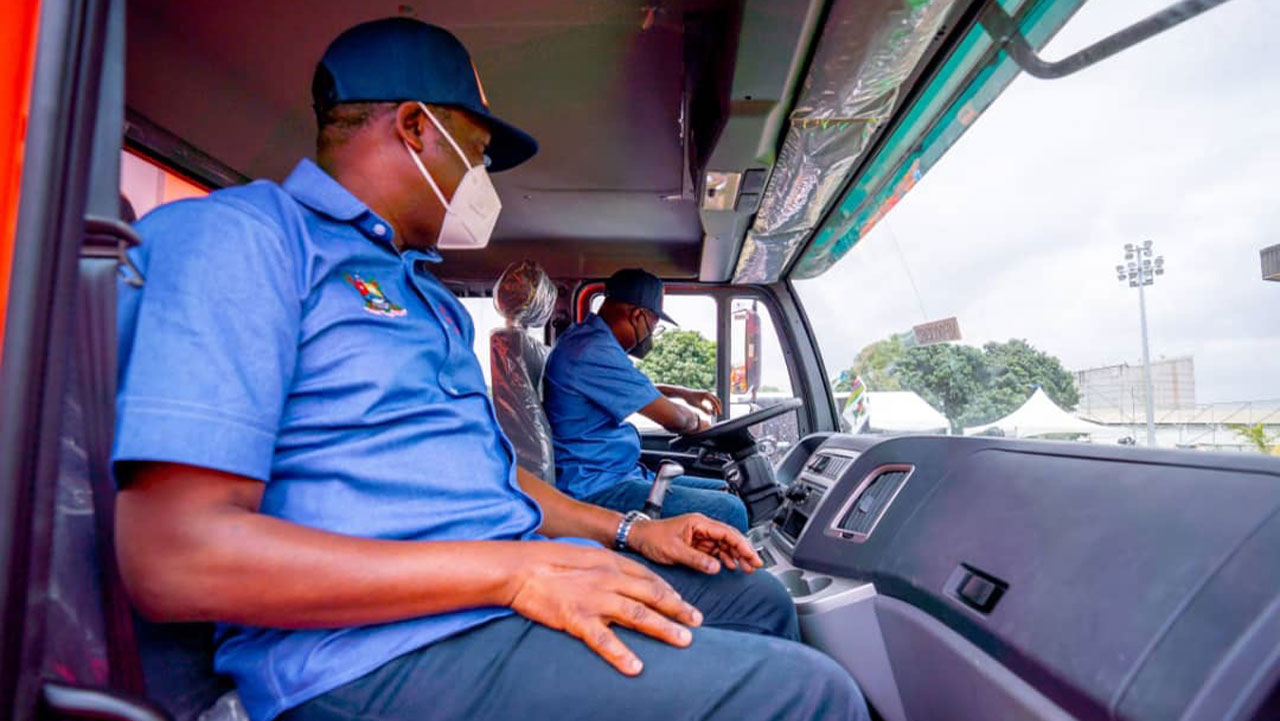 Governor Sanwo-Olu (Left), test running one of the trucks…yesterday

Worried by resurgence of refuse in Lagos, the State Government, yesterday, unveiled 102 new truck waste collectors and 100 bins to improve waste collection in the metropolis.

The vehicles, comprising 30, 12 Cubic metre Compactor Trucks, 60, 24 cubic metre compactor trucks, 12 hook loaders and 100 double Dino bins were locally assembled, according to the Governor. Sanwo-Olu, said this is one of the largest one-time investments in the waste management sector in the state.

Recall The Guardian, recently reported the resurgence of waste on medians and roads in Lagos. But the governor expressed confidence that the addition of new assets to existing ones would quickly bring about visible improvements in waste evacuation and reduce the incidence of black spots that blight roads and clog drains.

The unveiling of news trucks and waste bins for Lagos State Waste Management Agency (LAWMA), he said, is not accidental, but demonstrative of the administration’s avowed love and determination to care for the environment.

This determination, the governor said, has seen the state already invest more than N2 billion towards the rehabilitation of dumpsites across the state and currently investing another N1billion in the construction of three new transfer loading stations to provide the necessary infrastructure to facilitate the effective delivery of solid waste management services.

According to him, government still remains determined to rewrite the narrative of waste management in Lagos State, and people must act like responsible citizens at all times, as they cannot continue to litter the roads, dump waste on the roadside or in illegal dumpsites, or patronize cart-pushers for waste disposal.

“ The equipment is only the beginning, the state strategy is to first restore the sector given the unfortunate destabilisation suffered in past years before taking it to the next level.

“Our plan to turn waste-to-wealth is taking shape, we are rehabilitating the compost facility in Odogunyan and we will be unveiling some more projects/programmes in the coming months, it is our hope that we will leave a long-lasting legacy and deliver a world class facility before the end of our administration,” he added.

The governor said his administration’s intention is not to put the Private Sector Participants (PSPs) out of business, as waste management should be private sector driven, and the role of the government, through LAWMA, will be primarily to provide support to PSPs.

“I am therefore pleased to announce that, among other things, we will shortly be rolling out a programme to assist PSPs to renew their waste collection fleet,” Sanwo-Olu stated.

Also, the Commissioner for Environment and Water Resources, Mr. Tunji Bello, said the governor’s gesture marks a turn-around in the fortunes of LAWMA, because Mr. Governor made a promise and delivered on his promise.

He stated that LAWMA had faced acute shortage of compactor trucks, to do critical intervention assignments, adding that with waste generation on the increase on daily basis, it has been a challenging task till date.

“As we all probably know, Lagos State is the fifth largest economy in Africa, with a population in excess of 20 million people. The pressure, resulting from the huge population, added to the volume of economic activities, expectedly trigger huge increases in the volume of waste generated across the state.

“As at today, no less than 15,000 metric tons of solid waste, is generated in the state on daily basis. This challenge necessitates, that LAWMA has an impressive truck fleet to cope effectively,” Bello said.

On his part, LAWMA boss, Mr. Ibrahim Odumboni, noted that road rehabilitation exercise, has drastically reduced the man-hours wasted by trucks in long queues, thereby boosting total daily truck trips to 800, from a paltry 357, in the recent past.

He stressed that the authority has re-organised street-sweeping/highway operations, effectively deploying 15,000 sweepers, to the streets and highways, in addition to a rejuvenated PSP operations, functioning in the 57 Local Government and Council Areas of the state.

“ We are trying to reduce pressure on the landfills, by reducing the volume of solid waste that goes there. This has made us intensify campaign on waste sorting and recycling, through the “Lagos Recycle Initiative”. And to woo Lagosians into the culture of recycling, we recently introduced the ‘PAKAM App’, which operates like Uber, for residents to access and interface with recyclers closest to them, and to win prizes through their waste sorting activities.

“Our LAWMA Academy is taking firm roots, and steadily building a future generation of environment-conscious and environment-friendly Nigerians. We are currently working on “LAWMA-Own-A-Bin” programme, which requires that residents acquire and own two customised waste bins, for proper containerisation of sorted waste,” he added.