The modus operandi of traffic robberies in Lagos had remained the same over the year.

They loiter around either on motorcycles or on foot and wait for a breakdown of vehicles or traffic, and swoop on unsuspecting drivers in hold-ups with dangerous objects, including guns, break their door screens, open them and request for their phones, wallets and other valuables and zoom away without hindrance.

The frequency of these attacks has increased as more people lose their jobs due to downturn, and gridlocks as a result of widespread construction work in the metropolis.

The police seem helpless as traffic robbers continue to have a field day even in broad daylight, leaving motorists and commuters with harrowing tales.

In some cases, nearby police or Lagos State Traffic Management Authority (LASTMA) officers watch helplessly while the operations last without any resistance.

Before now, these incidents were prevalent in some areas of the city, like Apapa-Oshodi-Oworosonki Expressway up to Berger on the Lagos-Ibadan Expressway, Lagos-Ikeja-Agege routes and Lagos-Badagry expressway because of their characteristic gridlocks, but it has extended to other parts of the metropolis.

Two weeks ago, there was a horrible sight on the Oshodi-Oworonsoki Expressway close to the LASTMA office, when some armed guys swooped on motorists, robbing them and their occupants of their belongings. 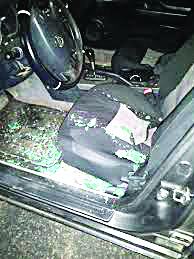 The robbers took advantage of the harrowing gridlock that started from Toyota Bus Stop and stretched to the foot of Third Mainland Bridge as well as the toll gate on the Lagos-Ibadan Expressway.

Recently, armed men waylaid a Coaster bus (apparently a staff bus), on Marina Bridge, around 4.40 pm in broad daylight and told everyone on the bus to come down, collected their phones, laptops, wallets and other valuables, got on their bikes and zoomed off.

A commuter, who simply gave his name as Abiodun said: “Everybody was just looking at them from the start to finish of their very smooth and unhindered operation.

“Even policemen down the bridge were just busy collecting money from Orile buses. Imagine you being robbed and you can’t even shout ‘Ole.’”

Confirming the incident, another commuter, Wale Ola, said: “The bus was right in front of me. I was coming from Victoria Island, and I stylishly removed my SIM, uninstall my mobile app and hid some money under the seat, remove my ATM cards and driver licence left only money in my purse, so I can easily hand it over. Glory to God, they didn’t come to me.”

According to him, these places are now unsafe zones and have remained so for years without any serious response from security agencies.

Also, a motorist who lives at Egan in Alimosho Local Government Area of Lagos, Mr. Daniel Michael said he carried kitchen knives and a tear-gas canister as his defence while driving in traffic.

He narrated his experience with hoodlums near Emzor Pharmaceutical Company at Aswani Road, Isolo, who took advantage of the potholes on the road to attack him in the evening while returning from work at about 10.p.m.

Michael said but for the Grace of God and his dexterity in driving, they could have robbed him as they swooped on him while he was trying to slow down as a result of the potholes. But on noticing their intentions, he quickly accelerated without minding the bad spots. He later paid the price as his car’s shock absorbers got damaged in the process.

Another motorist, Mrs. Comfort Alade, said she was accosted yesterday at the foot of Cele Fly-over, Itire side while negotiating a turn back to Oshodi by an army of youths, some of whom were wearing only boxers.

Mrs. Alade said the attack came even when there were some police officers nearby.

She was able to escape unhurt but not without the boys collecting her handbags and an android phone.

Narrating her experience, she called on the police and Lagos State government to do something quickly to address increasing incidents of traffic robberies in the state.

Efforts to get reactions of Lagos State Police Command’s spokesperson, Olumuyiwa Adejobi, were not successful as he neither picked his calls nor responded to messages sent to them.

But Adejobi recently said the command had deployed 1,000 officers to check traffic robberies in Lagos.

Also, the Lagos State Government said it had donated crime-fighting equipment to the state police command.

Governor Babajide Sanwo-Olu handed over the tools to the Inspector General of Police (IGP), Usman Alkali Baba, for the use of the Lagos Police Command during President Mohammadu Buhari’s visit to the state.

The security equipment and gadgets were procured through the Lagos State Security Trust Fund (LSSTF), an autonomous agency that partners the private sector and individuals to provide vital support for security agencies.

In addition to the supply of hardware to the police and other security agencies, Sanwo-Olu said Lagos Government had been building capability in cutting-edge security technologies in line with his administration’s security and governance pillar, which seeks to transform the state into a 21st Century economy.

The governor said the state government had started the phased rollout of security cameras across the metropolis, stating that the objective was to install the 2,000 surveillance cameras connected to the fibre optic network.