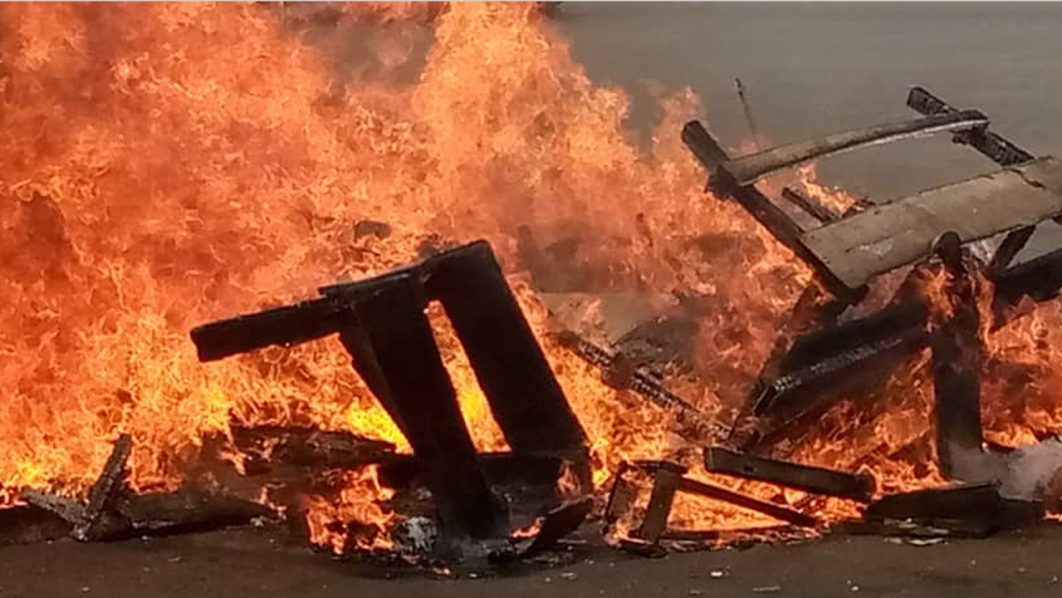 Some of the illegal structures burnt on the road.<br />PHOTO: ENIOLA DANIEL

The Lagos State Government yesterday began the demolition of shanties and other structures built on the right of way of the Oshodi-Apapa Expressway to enable the contractor handling the reconstruction of the road commence work on the service lane, as well as the beautification of the right of way.

The task force led by the Federal Controller of Works, Mr Olukayode Popoola, particularly targeted shanties along with the service lane at Ladipo, Toyota and Charity bus stops, as well as those located under the bridge leading to the airport road.

Every item found along the way, including automobile parts, was cleared. Cars and trucks carrying containers were also towed-off the right of way.

The demolition comes at the expiration of a two-week ultimatum given to residents and traders to vacate the areas.

The Minister of Works and Housing, Mr Babatunde Fashola, had appealed to residents to vacate the area during a visit to the bridge in the aftermath of a tanker fire on January 7.

Popoola said the exercise will be sustained as and barriers created to secure the right of way so that mechanics, traders, spare parts sellers will not reoccupy the cleared area.

“I called a meeting of all the unions and they all agreed to move away. After that, the task force gave them notices, which also expired on February 7, but they remained adamant, they refused to remove all their property, that is why the task force is clearing all the shanties so that we will be able to do our work on the service lane,” Olukayode said.

Reacting, the manager of Unity Warehouse on Ladipo road, Martins Obidiozor, has appealed to the government to allow them park vehicles outside since the warehouse isn’t spacious.

“When we offload our goods, vehicles can’t come inside the warehouse and some customers don’t pay on time. Sometimes, it takes two to three days to clear all the goods from the container. So, we have to safeguard their vehicles by keeping them outside, we can’t do anything to block the major road. We plead with the government to give us this one line,” he pleaded.

MEANWHILE, The Guardian reporter, Eniola Daniel, was beaten by policemen at the scene while covering the demolition of the shanties.

The reporter had began capturing the burning of the shanties on the highway when a man in plainclothes approached him and slapped him from behind before other security men dragged him into a Black Maria.

Despite identifying himself with his press card, a policeman said: “You are a bastard, we will move you to Badagry and no one will get you out.” All entreaties only yielded to more beating and his phone was seized and smashed.