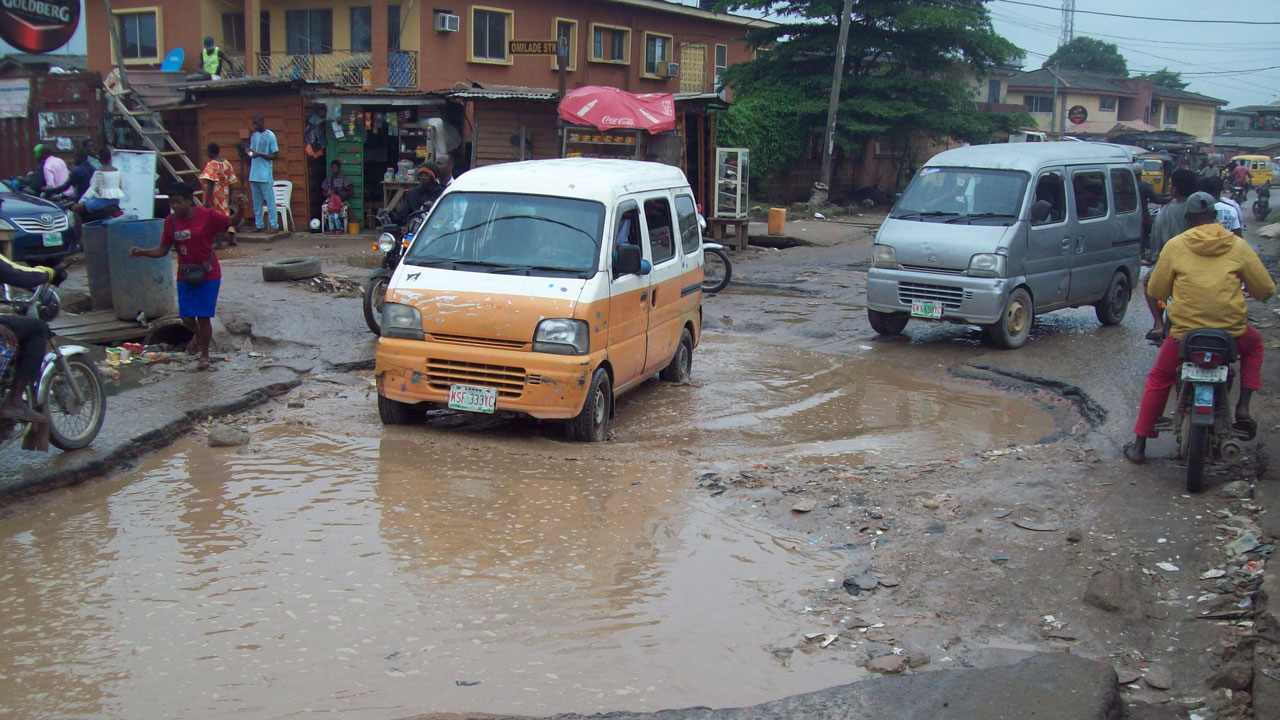 Residents and commuters in Mafoluku in Oshodi/Isolo Local Government Area (LGA) have decried the poor state of roads in their neighbourhood, especially Mafoluku Road, which links the community Oshodi market.

With potholes and craters, especially at Ayoni Bus Stop, on the Mafoluku Road, commuting on the road has become a nemesis for motorists and commuters in the community.

When it rains, plying the route becomes a nightmare for commercial drivers, who complain of frequent breakdown of their vehicles.

Commercial motorcycle operators, popularly known as (Okada), and tricycle operators, sometimes fall iinto the drainages as a result of the bad road, while residents find it difficult to bring their vehicles home daily, especially whenever it rains.

A commercial bus driver in the area, Akinsegun Sunday, who has been plying Mafoluku-Oshodi route for 18 years, said the deplorable state of the road is constantly damaging his vehicle as he visits mechanic workshops every week for repairs.

He said: “The pothole is affecting us. If you buy a new bus today, it will not last up to five years before it will be damaged because of the deplorable road.

“The government should come to our aid to repair the road. In the past 18 years, government officials only came to patch it and the last time they came was in 2019. The road needs to be reconstructed. It will go a long way in improving the life of people in the area.

“We have complained to government officials on several occasions but they have not done anything to assist us. Sometimes, we apply self-help by putting stones and gravel on the road but they are easily washed away.”

Also, a commercial tricycle operator, Mr. Olajide Ige, lamented that the local government officials always pass through the road daily but failed to repair it.

“This road needs urgent government intervention to reduce the hardship people go through on this road,” Ige said.

A resident in the area, Olajide Muhyideem, said that a few weeks ago, some government officials came to put sand and broken concretes on the potholes, but rain later washed them away, adding that all the streets in the area were in deplorable state.

He said: “Nobody is coming to rent shops on this street again because of potholes. People are packing out of this area because whenever it rains, they can’t go back home.”

Muhyideen explained that the community has written letters to government for the repair of the road but there has been no positive response.

But the chairman of Isolo/Oshodi LGA, Hon. Bolaji Muse Ariyoh, could not be reached for comments as he did not pick his calls or reply to text messages sent to his phone numbers.