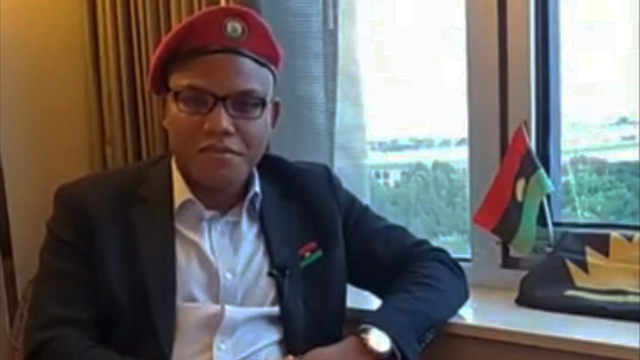 Leader of the Indigenous People of Biafra (IPOB) Nnamdi Kanu Monday took a swipe at the handling of security rising insecurity in Nigeria, accusing President Muhammadu Buhari of bias toward “Fulani groups”.

Kanu in a tweet claimed that prisoners should be freed “If Miyetti Allah terror herdsmen, other murderous #Fulani groups, including Boko Haram insurgents, can be arrested, freed and rehabilitated by this neo-colonial Fulanised Nigeria President.”

The IPOB leader said, “no single soul deserves to be in any prison in Nigeria.”

The Imo State Police Command headquarters and SCID building situated in the state capital were also attacked in the early morning raid, which a security source said started around 1 am.

Although the police said, “some inmates” were freed, a media report claimed as much as 1, 500 inmates escaped. The report said the attack lasted for about three hours.

“At about 0100hrs of date, armed men suspected to be members of IPOB/ESN criminal gang in their numbers invaded Owerri Prisons mine using dynamites and other heavy explosives, gained entrance and released some inmates in the prison,” a security memo published by PR Nigeria said.

“The hoodlums also attacked the Police State Headquarters Owerri while firing consistently with AK 47 rifles and explosives, released some suspects detained in the SCID cell and put fire on so many vehicles parked at the Headquarter premises including the SCID office building.

Prior to the attack, IPOB members were accused by the police of being responsible for the killing of security personnel in parts of the South-East.

Apart from freeing the inmates, the security report alleged that IPOB members also torched some offices, structures, and vehicles within the vicinity.

A security officer told PRNigeria that the attackers used dynamite and sophisticated gun during the attacks.

“Heavy gunshots and explosions could be heard in the area when they arrived with sophisticated weapons including dynamite and guns,” the security officers said in the report.

“Meanwhile while some of the inmates in the Correctional facility refused to go while others have voluntarily returned.”

Madugba, however, stated that the number of escaped inmates and damaged vehicles was yet to be confirmed.

The police spokesman called on residents of the state to go about their lawful businesses, as according to him, the situation is under control.