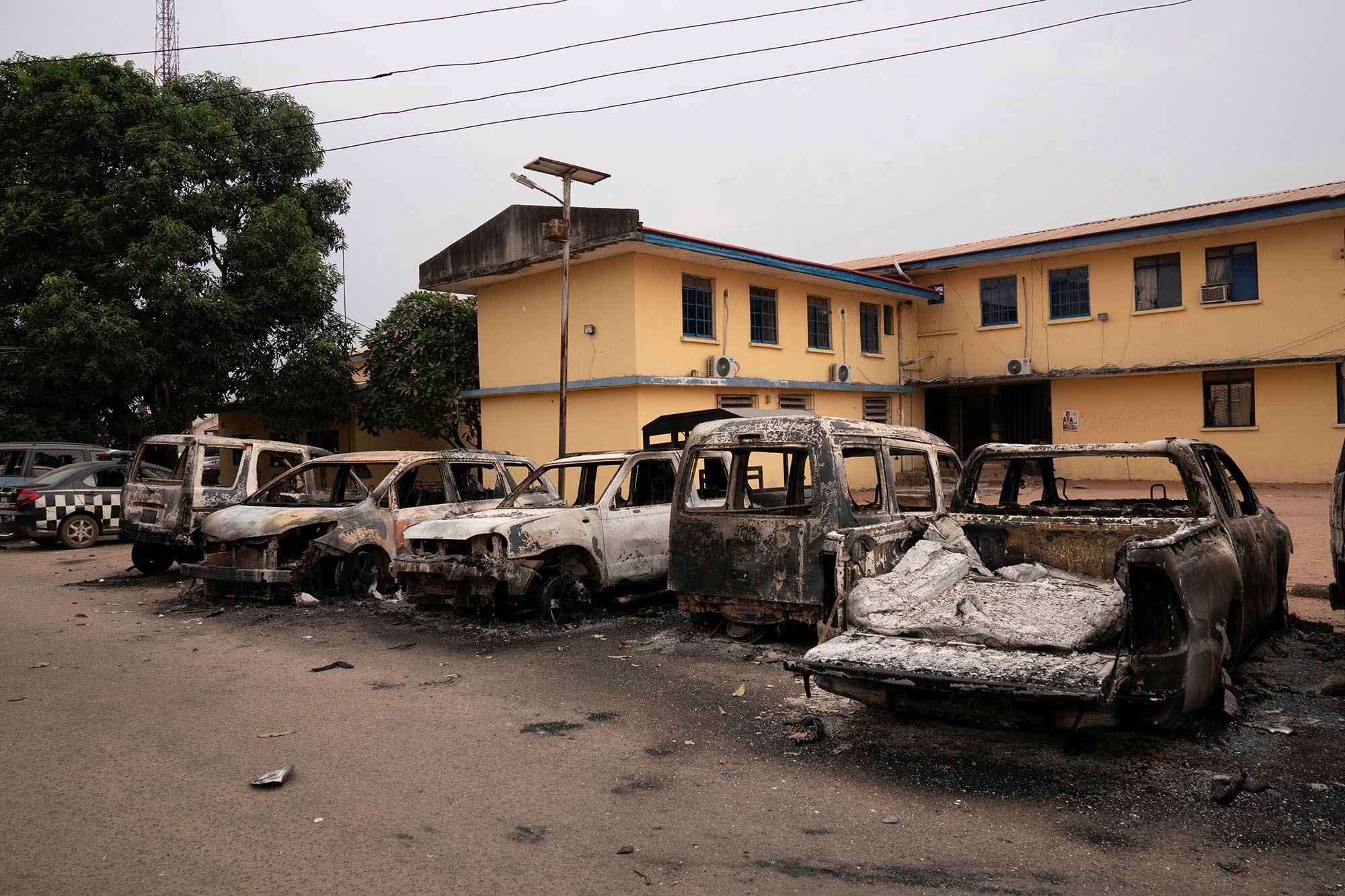 The South East has recently become the new venue for surprising violent attacks and has witnessed a few cases of insecurity, which has left mouths agape and also fixed a question mark on the hitherto claims of safety in the region.

From Ebonyi to Abia, Anambra to Imo, there has been one form of bloodletting or the other. In Ebonyi, invading armed men entered a community and killed innocent and defenceless persons, including women and children, in the most gruesome manner anyone could imagine.

In Abia, the same security problems have persisted with pockets of killings, mixed with robbery and attacks on security agents and their facilities.

The attacks in Imo and Anambra States, which only happened days back, can be described as the most brazen of the security breaches.

In Anambra, an unknown number of gunmen invaded the venue of a youth summit in Isuofia in Aguata LGA, where the former Central Bank Governor, Prof Chukwuma Soludo, who is also a governorship aspirant of the All Progressives Grand Alliance (APGA) was already speaking to over a thousand youths and opened fire, killing three policemen.

Before then, there have been cases of attacks and killing of security operatives in the state as well as attacks on police stations.

In Imo, the mother of all attacks was masterminded by yet to be identified gunmen, who stormed the custodial centre of the Nigerian Correctional Services in Owerri and engaged trained operatives in a shooting match, overpowered men on duty and forced open the prison, asking all the inmates to ‘go home, Christ has risen for your sake’.

A bit of comic relief you may say, but over 1800 convicted criminals were let loose that day.

The recent wave of attacks has exposed the apparent threat that a yet to be identified group have declared war on the zone, either to make a point or to disrupt the peace in the zone for unknown reasons.

The question, however, has remained who is responsible, to what end are these attacks masterminded?

In Ebonyi, fingers pointed to Fulani herdsmen for the gruesome murder of indigenes of a community in the state, Miyetti Allah, DAILY POST learnt did not disappoint at all, as it quickly owned up to the killings, describing it as a reprisal for an earlier attack on them by the indigenes of the community.

The attacks in Anambra and Imo, however, were suspected to have been masterminded by the security arm of the Indigenous People of Biafra (IPOB), known as the Eastern Security Network (ESN), with speculations that it may not be unconnected to the usual verbose and boastful broadcasts of its leader, Mazi Nnamdi Kanu.

The group and its leader has, however, denied the claims, saying that the non-violent stand of the group has not changed. The publicity secretary of the group, Mr Emma Powerful had in a statement said the group was formed on the principles of peace and would not compromise or attack government facilities.

Powerful’s statement had read, “The attention of IPOB has been drawn to the fallacious and fabricated reports that it is involved in the attack of prison and police headquarters in Imo. IPOB and Eastern Security Network (ESN) are known groups, not unknown gunmen. ESN is in the bush chasing terrorists and has no business with the said attacks. We were not involved in the attack in Owerri and the recent attack on Onitsha-Owerri road at Ukwuorji junction. It is not our mandate to attack security personnel or prison facilities.”

Despite these denials, the immediate past Inspector-General of Police, Adamu Abubakar had insisted that the attack on the Owerri custodial centre was carried out by ESN, while also promising to deal with them.

There have, however, been a series of attacks on the former IGP and blame on the ESN. Many wondered how Adamu could have come up with such allegations when investigations were yet to commence.

A public affairs commentator, Barr Innocent Adu who spoke in a radio programme in Awka insisted that it was unwise for the former IGP to conclude even before he had commenced investigation. Adu said, “Is it because they are Igbos that the IGP found it so easy to accuse them? It has been days since the Ebonyi community was attacked by people said to be herdsmen, so, did the IGP accuse the herdsmen? The answer is no. They said they needed to investigate before concluding. So, why can’t the IGP investigate the Owerri incident before concluding?

To further compound this, IPOB’s sister organization in the secessionist bid, Movement for the Actualization of the Sovereign State of Biafra (MASSOB), has absolved IPOB of the attack, rather saying that the attack was coming from outside to portray the zone as a battlefield. In a press release made available to DAILY POST in Awka, the leader of MASSOB, Mr Uchenna Madu accused the federal government of being responsible for the attacks in Igboland.

The group said it found this out through its intelligence arm and that the aim was to portray the South-east and the secessionists as terrorists or turning violent.

Part of Madu’s release read: “MASSOB condemns the terrorist attack against Chukwuma Soludo at Isuofia, we equally condemned the unwarranted killings of Ebonyi State indigenous citizens by Fulani terrorist herdsmen, MASSOB condemned in totality, the breaking of Owerri prison by the so-called unknown gunmen. Through the MASSOB intelligence Agency, we found out that all these attacks are being sponsored and executed by the federal government of Nigeria through their protected militiamen called bandits and unknown gunmen. Their primary aim is to discredit the non-violent pro-Biafra freedom fighters like MASSOB and IPOB. They want to create an erroneous impression that pro-Biafra agitators have turned violent and militant.”

The terrorist attacks in Owerri are part of the ongoing destructive measures by the President Muhammadu Buhari led administration to discredit and blackmail the pro Biafra organizations to create an erroneous impression that Biafrans are waging war against Nigeria,” Madu had said.

As the debate on who could be responsible for the series of attacks continue, the fear in the region now is, what location will the next attack be? Who would be the victims?

The security situation in the zone has deteriorated such that the police and other security agencies which have the mandate of protecting the people can no longer offer such service, especially as it is a target of the attack itself.

In Anambra State, DAILY POST gathered that there is a new directive banning policemen from wearing their uniforms on the streets. This, it was gathered is a measure to keep policemen away from attackers.

Also in Anambra, the state Police Command and their Nigeria Correctional Services (NCS) counterpart have blocked roads passing through the state police headquarters and the custodial centre in the state, causing untold hardship on motorists and other road users.

The blockade is to forestall attacks on the facility, as stern-looking policemen stood guard, ordering motorists and passers-by to alternative routes. The Public Relations Officer of the Anambra State Command of the NCS, Mr Francis Ekezie said it was part of the plan to forestall attacks, saying that other measures that cannot be made public have also been taken by the NCS.

“You should know that before you see the physical manifestation of security measures like barricades of target points, other measures which are not always for the consumption of the public have been put in place. All the security agencies are on the ground at points you may not easily decipher. Intelligence gathering and strategies are already on the ground. We are leaving no stone unturned to avert external aggression,” Ekezie said.

The Public Relations Officer of Anambra State Police Command, DSP Toochukwu Ikenga on the other hand said the barricades erected by the command was a way of checkmating attacks. “We just have to ask the people to bear with us for now, but these things are very necessary. You know also that that barricade did not start today, just that we are reinforcing it because of recent events.”

Following the appointment of a new IGP, Usman Alkali Baba, the people of the southeast are waiting to see what could be done to restore the known peace in the zone.