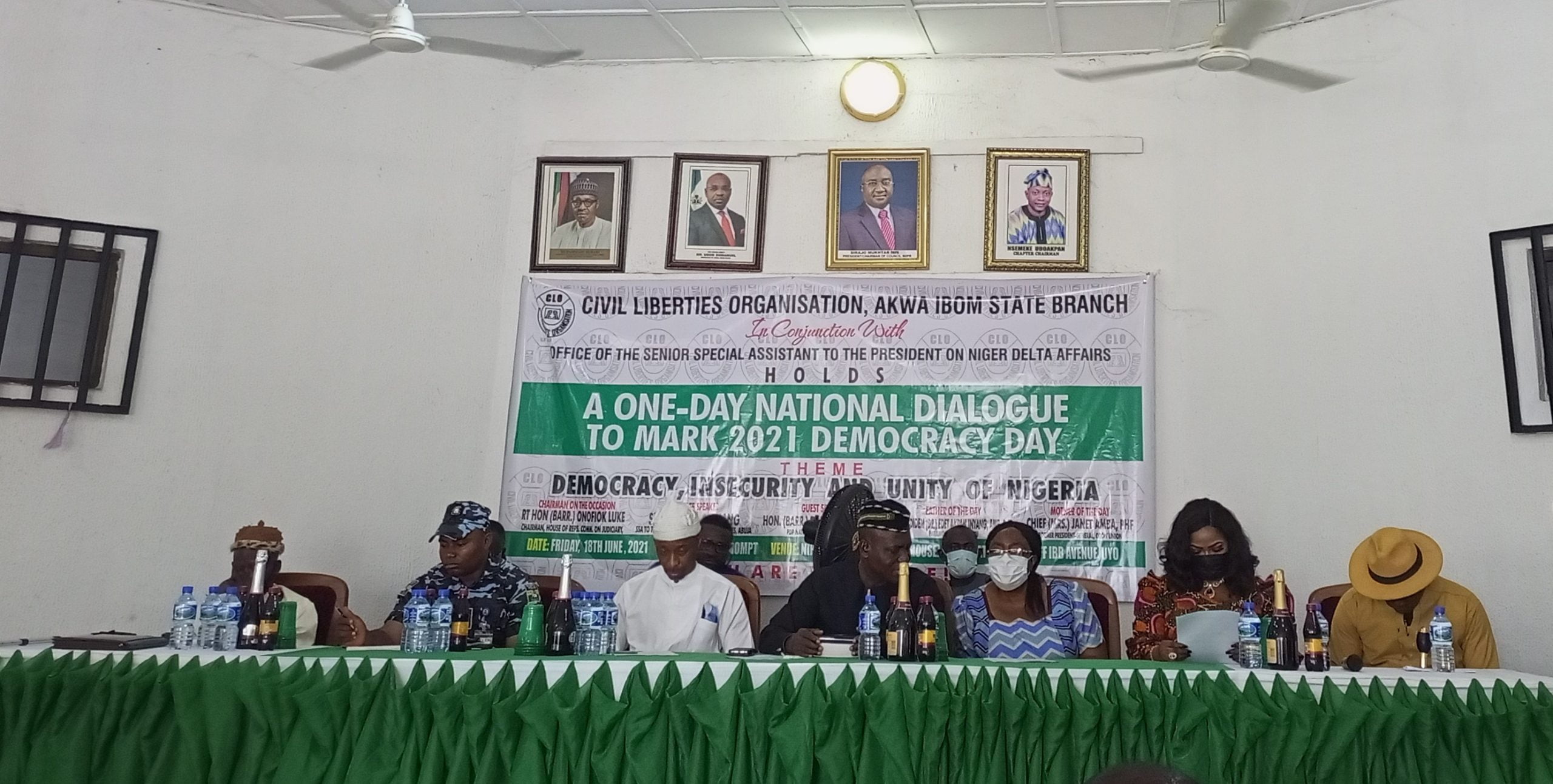 The National Legal Adviser of the Peoples Democratic Party, PDP, Barr. Emmanuel Enoidem, said one of the potent ways of addressing injustice and insecurity rocking Nigeria is to make deliberate and sincere steps to accommodate the Igbos and ensure they occupy the highest office in the country.

Enoidem represented by Tom Fredfish, HOD, Public Administration, Maurid Polytechnic, Nsit Ubium, stated this on Friday in Uyo during a one day National Dialogue marking 2021 Democracy Day, with the theme, ‘democracy, insecurity, and the Unity of Nigeria,’ organized by the Civil Liberties Organisations (CLO) in conjunction with the Office of Senior Special Assistant to the President on Niger Delta Affairs.

The PDP legal Adviser however noted that injustice was part of the root causes of insecurity in the country adding that the agitations in the south East was as a result of systemic perennial injustice.

Enoidem said, “Injustice is one of the factors that has led to insecurity in Nigeria. It is often said that injustice anywhere is injustice everywhere. It cannot be doubted that what is happening in the South East today which is gradually snowballing and degenerating to other parts of the country is a function of a built-up perennial systemic injustice.

“The Nigerian state specifically from 1999 till date has continued to show disdain for the Igbos viewing them as agitators who caused the civil war – an attitude that depicts that the war has not ended. My opinion is that until and unless the managers and leaders of the Nigerian state take deliberate and sincere steps to accommodate the Igbos by allowing them to occupy the highest office in the land, the civil war has not ended.”

He said his view was not to justify any form of violent acts resulting in the death of people and destruction of property but to work towards assuaging all stakeholders in the polity, dialogue with the agitating zones and build a productive relationship based on trust.

He added that for Nigeria to work again, several measures must be undertaken which included: constitution amendment to reflect the practice of True Federalism, Dialogue with the ethnic groups agitating to secede, democratization of education, strengthening the laws among others.

Earlier in a Keynote address, the Senior Special Assistant to President Muhammadu Buhari on Niger Delta Affairs, Senator Ita Enang called on all Nigerians to sink their differences and work together towards tackling the challenges facing the country.

He said a National dialogue should be convened to give every zone the opportunity to air their grievances for a possible solution adding that youths should be the key players in the dialogue.

Enang noted that profiling and tagging the youths criminals or cultists was responsible for the restiveness witnessed in the country, and called for their meaningful and impactful engagement.

According to him, “The voices of discord are getting louder and it may be time to allow Nigerians to dialogue with each other by whatever arrangement. It was like this under Jonathan Presidency in 2013 when President Jonathan convened that 2014 confab and that political temperature was tamed and calmed.

The Chairman on the occasion and member representing Etinan, Nsit-Ibom, Nsit-Ubium state constituency in the National Assembly, Hon Onofiok Luke, called on the President to engage in a dialogue with the agitators in the South/East and South/West regions.

Luke, who is also the chairman House committee on Judiciary, expressed displeasure that much has been said but the implementations have been difficult.

On insecurity and secession, Luke said, “The agitation for secession, for all sorts of things, is because some sections of the country feel marginalized. I know that there was a time in this country that the loudest voice agitating for the betterment of the people was the Niger Delta region. But you will agree with us today that by the grace of God we have experienced peace in the Niger Delta region compared to other regions.

In his remarks, the president of Igbo Community in Akwa Ibom State, Elder S.N Orie said the root cause of the agitations and unrest in the country was predicated on faulty sharing formular.

He however urged the president to address the issue for the sake of equity, Justice and fairness.

“You can not beat a child and ask him not to cry. The sharing formular by the government is not right and this should be addressed. We have been marginalised, the problem is from the head, I appeal to the president to ensure that the sharing formular is balanced,” Orie said