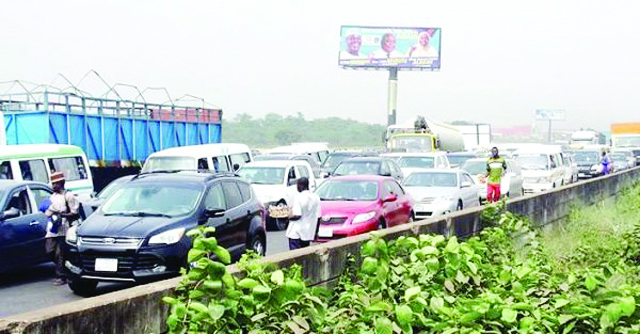 It was a case of different strokes for different folks on Tuesday night as robbers held sway for about an hour at the six-kilometre Long Bridge on the Lagos-Ibadan Expressway, disposing of motorists and commuters of their belongings.

This came despite efforts by the police at Warewa to stem the tide of robberies on the Long Bridge, which is in-between Ifo and Obafemi Owode Local Government areas of Ogun State.

The robbers were emboldened by absence of street lights on the bridge and the slow pace of construction work by Messrs. Julius Berger Plc, leading to perennial gridlock on the road.

Robberies are not unusual on the bridge, but criminals are becoming emboldened by the day. Under the cover of darkness, robbery, kidnapping and murder, among other heinous crimes, have been recorded on the bridge with motorists, commuters and residents of surrounding communities at the receiving end.

Activities of men of the underworld continue unabated as morale and tools of police personnel wane.

The heavy rainfall on Tuesday compounded the problem as the robbers struck around 8:00 p.m. with knives and daggers unfettered, while the police patrol team got stuck in traffic.

Some motorists were able to make a quick detour towards Lagos to escape from the ruthless robbers, while many others fell prey. Among them were an Indian, who was stabbed alongside his driver.

Others like Mrs. Akonte Ekine lost their handbags and belongings to the robbers.

Many motorists abandoned their vehicles and ran for cover, leading to pandemonium.

The Guardian learnt that the Indian was rushed to a nearby hospital but died yesterday.

Ekine, who was driving during this incident, told The Guardian that afterwards, he left the car and ran back to Lagos.

“We were just running helter-skelter; the criminals were coming to the cars and opening the doors. If you locked the car, they would break it.

“The Indian who came to Nigeria to look for what to eat got stabbed.

His driver was also injured,” he added.

Ekine wondered why the government refused to light up the long bridge to ensure security at nightfall.

Another victim, who gave his name simply as John, was angry about the pace of work and wondered why Julius Berger was holding commuters to ransom.

Also, a victim, Morenike Odusanya, said that she was yet to recover from the shocking experience caused by the robbers on the bridge, adding that the two side windows of her car were hit during the operation.

“It happened around 8:00 p.m. I was alone in the car when the armed robbers broke my car windows and demanded my phones and other belongings after attacking the car in front of me.

“I was speechless and could not utter a word because they looked too dangerous. The robbers, three in number, ransacked my car unhindered; looking for anything they could lay their hands on.

“The traffic was so serious that nobody could attempt to come to my aid. I could observe that those around were helpless as well, so no need of calling for help.

“After they were satisfied with ransacking my car, and they didn’t find anything valuable on me, they left. We really need police presence on this bridge,” she said.

But a resident, Emmanuel Odeh, said there was the need for special security arrangements in the area to complement efforts being put in that place by the police in Warewa.

He, however, called on the government to light up the bridge as well as put up wired nets as done at Ketu and Ojota in Lagos, where robbers cannot have access to jump down or come from in-between the bridge.

Odeh also wants the engagement of more security operatives to man the bridge because of its length, which might be difficult for the police alone. Also, a police officer on patrol said the rain on Tuesday compounded the traffic situation as it did not clear until 2:00 a.m.

The officer, who craved anonymity, said the police had raided under the bridge periodically without seeing anyone as the robbers usually came from different places, especially the crime-infested Kara area.

He also said the police had not recorded any issue of using guns on the long bridge apart from knives, daggers and other dangerous objects.

According to him, an individual assisted the police with six-panel lights to light the bridge and had gone ahead to buy some solar panel lights to put on the bridge for a bit of visibility for their operation.

He said: “We used to go round with our bikes. Anytime we have broken down vehicles, we sit down with them until they left. Our DPO recently procured about 20 raincoats and rain boots to ease our operations and ensure that the robbers’ activities are put at bay.

Spokesman for Ogun State Police Command, Abimbola Oyeyemi, told The Guardian that the robbers took advantage of the gridlock.

He also confirmed that the stabbed Indian, unfortunately, lost his life.

He said: “In fact, there was an encounter with the robbers because the police engaged them and many of them fled with gun injuries. Even the driver to the deceased can attest to the fact that he was able to take the man away from the scene to the hospital because of the intervention of the police.

“It was because of the sporadic gunshots by the police that he was able to escape with the man to the hospital. Unfortunately, the man lost the battle.

“We are at the trail of those hoodlums. Recently, we were able to sanitise that place. It is like some of these notorious groups are regrouping.

“We always have 24-hour surveillance on the long bridge, but they just took advantage of the gridlock on Tuesday.

“This is the type of opportunistic crime that always happens when there is that type of situation. There have been constant raids, especially on criminal hideouts around Kara Bridge.

“We have destroyed many of their hideouts; we have arrested many, and some of them have even lost their lives in an encounter with our men. It is only that there is no way total eradication of crime can take place, but the ability for us to reduce it to the barest minimum is what we are doing.

“They just came out from under the bridge to commit that havoc. That is what happened. We are doing a lot from that axis,” he added.