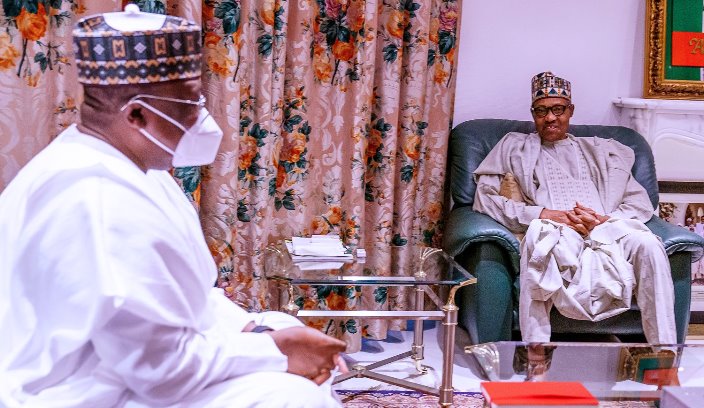 In recent times, security in Nigeria has so degenerated to a worrisome point that it has affected all strata of the economy. From North to South, East to West, terrorists, bandits, killer herdsmen, armed robbers, kidnappers and even ritualists are having a field day – killing helpless and hapless Nigerians, especially women and children.

The unfortunate part is that this spate of general insecurity has continued without any sign of abating. Despite efforts by security personnel, insecurity in Nigeria still looms large to the chagrin of every Tom, Dick and Harry.

President Muhammadu Buhari won the 2015 general election because Nigerians were optimistic that as a retired army general, he could easily deploy his military experience in quelling any form of terrorism, banditry, armed robbery, kidnapping, if voted into power. But the reverse has been the case as security situation in the country has continued to nose-dive five years into the Buhari’s administration.

Prominent Nigerians have been voicing out, even proffering solutions on how general insecurity can be tamed. But those who summoned the courage to speak have always been constantly suppressed, oppressed and intimidated. For instance, in March 2018, at the maiden convocation ceremony of Taraba State university in Jalingo, the former Minister for Defence, Theophirus Danjuma, a retired army general called on Nigerians to rise and defend themselves against ethnic cleansing.
He said the unnecessary killings, which was a target to ethnic cleansing on the people of Taraba and Nigeria at large must stop, calling on the people to “rise and defend themselves against the killers.”

The former army general had said Nigerians were being slaughtered by deadly gangs because the armed forces were not neutral. He said security forces instead helped the assailants by providing them with cover.

According to him, “You must rise to protect yourselves from these people, if you depend on the Arm Forces to protect you, you will all die.

“This ethnic cleansing must stop in Taraba, and it must stop in Nigeria. These killers have been protected by the military, they cover them and you must be watchful to guide and protect yourselves because you have no any other place to go.

“The ethnic cleansing must stop now otherwise Somalia will be a child’s play. I ask all of you to be on your alert and defend your country, defend your state.”

Similarly, a former deputy governor of the Central Bank of Nigeria (CBN), Obadiah Mailafia on August 10, 2020 speaking during a programme on Nigeria Info 95.1FM, Abuja said repentant insurgents informed him that a governor from the north was their commander, a statement that caused a stir among Nigerians, with the Northern Governors Forum asking the security agencies to investigate the allegation.

“I have reasons to believe that my life is in danger and that some powerful political forces want to silence me forever for speaking the truth, for speaking on behalf of the Holy Martyrs- of thousands of innocent children, women, elderly and youths that have been killed in our beloved country,” Mailafia revealed.

As expected, the Presidency used the Department of State Service (DSS) to harass and intimate the former deputy governor of CBN.

His lead counsel, Pius Akubo (SAN), described his client’s constant and frequent invitation by DSS as open and unjustified persecution because of where he comes from in Nigeria, claiming that many other Nigerians had said more than what Mailafia said and they went away scot-free, adding that it was a clear case of outright minority persecution.

After the beheading of 43 rice farmers in Zabarmari community in Jere Local Government Area of Borno State by Boko Haram terrorists in December 2020, the House of Representatives invited Buhari to come and explain the security situation in the country.

Nigerians were, however, thrown aback when the president suddenly declined to brief the joint session of the National Assembly less than 24 hours he was due to address the lawmakers.

The Minister of Justice and Attorney-General of the Federation, Abubakar Malami put up an argument that the National Assembly has no powers to invite the president.

But Tope Akinyode, a constitutional and human rights lawyer, has insisted that the National Assembly has the powers to invite President Muhammadu Buhari.

Over the years, the nation’s lawmakers have failed woefully in this core responsibility of oversighting, especially the executive arm of government. It is even worse in the current 9th Senate, which goes with the sobriquet ‘Rubber Stamp’ because of their willingness to do the president’s bidding (endorse whatever the President’s send to them or look the other way when the president should be called to order).

A good number of their resolutions last year, including a call on the president to sack the service chiefs were completely ignored. The current crop of lawmakers is generally perceived to have compromised in their legislative duties in so many ways. They cannot bark as well as bite, which is dangerous to our democracy.

So the question now is: Where does this weak oversight by our lawmakers leave an average Nigerian who is daily exposed to all kinds of danger?

The simple answer is unending insecurity as we recently see in Kagara, Niger state where over 40 students and staff of Government Science College were abducted by armed gunmen.

Admittedly, weak oversight is not the sole reason why insecurity is looming large in every part of the country, but it has indeed contributed in no small measure.

Jide Ojo, a public analyst, was of the view that bad governance has given birth to unemployment and poverty, adding that it is the major reason why insecurity has become a huge challenge.

He said bad governance or mis-governance was largely responsible for the level of insecurity, but pointed out that if the lawmakers had done well with their oversight function, they might have exposed this injury much earlier.

Ojo explained that under the circumstance we found ourselves, these lawmakers cannot dare to impeach the president because a good number of them are government contractors.

According to him, “That is just one of the many reasons. It is not that alone. Whatever we want to say, the issue of insecurity is lack of good governance not just oversight. Oversight is part of it, but if there is good governance, if people have jobs, if there is no poverty, you don’t have this kind of crime. Not that any society is free of crime, but you don’t have this scale of abduction and insecurity.

“Just like Buratai said during his screening for non-career ambassadorial position, that some local governments in Borno state have no access to road. The fact that people graduate and have no job, wake up and have no food. The society of the world where people are paid unemployment benefits, they know what they are doing. The reason is to prevent their people from taking to crime. But situation where we are now, the entire social register for Nigeria is 3.6 million and that is just like a drop in the ocean, because if you compare the number of people who need this support to cushion the effect of poverty and high cost of leaving. The point is that we have bad governance or mis-governance and that largely what is responsible for the level of insecurity. I do agree, however, that if our lawmakers have done well with their oversight function, maybe they would have exposed this injury much earlier. But they are also part of the problem, don’t forget that situation whereby the lawmakers are only interested in their own self aggrandizement.

“That is the aftermath of what we are reaping now. There is no good neighbourliness and no care to the vulnerable again.

“Under the circumstance we found ourselves, the president cannot be impeached. The point is that even if you impeach him, do you think that will solve the problem? Let me break it down further, we have a friendly National Assembly that cannot dare to impeach the president. Assuming without conceding that they even want to attempt it, it cannot sail through because all of them have been compromised. You are just talking of a legislative arm that does not do thorough oversight and if they have been very thorough, they would have exposed it. A situation where you have lawmakers doubling as government contractors, it will be difficult to impeach the president.

“You saw what happened with the NDDC probe when the Minister of Niger Delta Affairs said that it was the lawmakers that corner most of the contracts. The National Assembly is complicit. So, how will a complicit National Assembly turn around to say they want to impeach the president? Even if the president is impeached, it still does not solve the problem. The problem is not for the federal government alone to solve; it goes beyond that. There are 36 states governors and 774 local government chairmen. What are the governors and chairmen doing? So if you want to impeach the president for non performance, then you have to impeach all the 36 states governors and 774 local government chairmen. But beyond that, look at what has happened with the change in service chiefs, Nigerians were clamouring for a change and there was a change in the service chiefs, yet there was abduction two weeks into their coming in.”

It, therefore, comes to reason that weak oversight by the lawmakers is partly responsible for the ugly security situation overwhelming the country. Huge amount of money has gone down the drain in our MDAs due to poor oversight. There is also no accountability and transparency in budget implementation because our lawmakers more, often than not, compromise.

Sadly enough, most of the job openings in government ministries, departments and agencies are being cornered by these lawmakers, who have slots.

Moreover, our lawmakers used their influence and position to corner most of the government contracts, which are paid for but are not executed.

By and large, corruption is not just at the heart of this lingering insecurity, but it is actually fueling it.