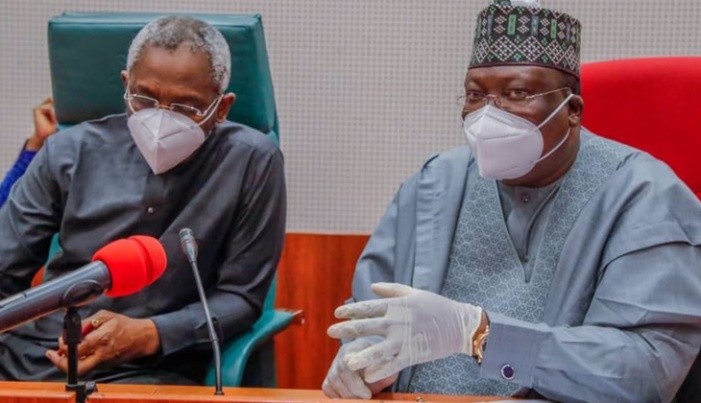 Since 2015, the relationship that has existed between the Executive arm of government and the legislature has ultimately worked against the interest of Nigerians.

Contrary to promise of harmonious relationship among all arms of government, the reverse has been the case in the last five years, plus.

The cat and mouse relationship of the executive and legislature had its origin in the selection of presiding and principal officers of both chambers of the National Assembly as the n- PDP faction of the APC takes over the leadership of the legislature as against other wings of the merger that produced APC.

While APC had settled for Ahmad Lawan of the defunct All Nigeria Peoples Party (ANPP) and George Akume of the erstwhile Action Congress of Nigeria (ACN) for the position of President and Deputy President of the Senate in 2015, the n-PDP teamed up with their allies in the People’s Democratic Party (PDP) to elect Bukola Saraki and Ike Ekweremadu for the positions.

Similarly, the APC preferred choice of Femi Gbajabiamila for the position of Speaker of House of Representatives was jettisoned for Yakubu Dogara who had the overwhelming support of PDP lawmakers to emerge Speaker.

There was serious acrimony between the 8th Assembly under Saraki and Dogara who later dumped APC for PDP and the Buhari-led executive which culminated in the treatment of executive bills and requests with levity, while the executive in most cases withheld assent to important bills and disregarded motions passed by the legislature.

As disclosed by the former President of the Senate, Saraki, Buhari had in his first four years, apart from the annual Appropriation (Budget), sent only 11 Bills to the National Assembly out of which only two, the Mutual Assistance in Criminal Matters Bill and the National Minimum Wage Bill were passed.

“One of the bills, the Money Laundering Prevention and Prohibition Act (amendment) Bill was withdrawn by the executive following the disagreement between the Attorney General and the Chairman of the Economic and Financial Crimes Commission (EFCC).

“Also, another one, the National Water Resources Bill was rejected because it infringed on the rights of states to develop their water resources,” Saraki had said.

The other seven, including the National Centre for Disease Control and Prevention Establishment Bill, Federal Institute of Industrial Research for the Development of Micro, Small and Large Industries Bills, the Suppression of Piracy Bill, Communications Service Tax Bill, 2015; Federal Institute of Industrial Research Bill, 2017; Raw Materials Research and Development Council (Repeal and Re-enactment Bill 2018; Nigeria Natural Medicine Development Agency (Establishment etc) Bill, 2018 were at various stages till the expiration of the 8th Assembly.

Also, the acrimony between the 8th Assembly and the Buhari Presidency caused budget delays throughout the four years as budgets were usually passed in the second quarter of each financial year which did not augur well for the economy and always complained by the executives.

Experts had also alluded that the incessant delay in the approval of budgets during the four years contributed to the economic misfortune as the country’s economy depends on government budget.

Sheriffdeen Tella, a professor of Economics at the Olabisi Onabanjo University Ago-Iwoye, Ogun had asserted that early passage of the budget could promote economic growth and development.

“The Nigerian economy depends on government’s budget to function properly. The private sector particularly needs to see government direction to plan and execute their plans.

Apart from that, there were instances where the 8th Assembly rejected requests for confirmation of appointments such as the case of the former Acting Chairman of EFCC, Ibrahim Magu who held office in acting capacity against the law.

There was also the case of rejection of request by Buhari in 2016 to borrow $30 billion abroad which he claimed was for infrastructure projects and budget support up to 2018, amongst others.

Buhari too had withheld his assent to many bills passed by the 8th Assembly without minding the consequences on Nigerians. Former Chairman of the Independent National Electoral Commission (INEC), Attahiru Jega had in a report, titled: ‘Scorecard of the 8th National Assembly’, said President Buhari gave assent to only 80 bills out of the 515 passed by the 8th National Assembly.

Prominent amongst the rejected bills were the Electoral Act Amendment Bill and the Petroleum Industrial Governance Bill (PIGB). The Electoral Act Amendment Bill sought to address a plethora of issues ahead of the 2019 general election such as the cost of politics, internal democracy, the use of technological innovations and gaps in extant provisions.

Buhari in a letter to the National Assembly indicating his withhold of assent to Electoral Act Amendment Bill said: “I am declining assent to the Bill principally because I am concerned that passing a new electoral bill this far into the electoral process for the 2019 general election which commenced under the 2015 Electoral Act, could create some uncertainty about the applicable legislation to govern the process”.

For the PIGB too, which intended to address issues in the oil and gas sector to encourage competition and grow the economy, Buhari declined assent on reasons he described as constitutional and legal.

The relationship between the 9th Assembly since it debuted in 2019 and the executive has been generally seen as harmonious as the current National Assembly leadership under President of the Senate, Lawan and Speaker of the House, Femi Gbajabiamila is the choice of the ruling party.

One remarkable achievement of the current Assembly is the return to the January-December Budget cycle that has been successful in the last two years. However, Nigerians are yet to feel the economic benefit of the quick passage of budget as the country slipped into second recession last year.

Under this Assembly, the executive now gets prompt approval to its requests including borrowing and confirmation of appointments while most of the Bills that were rejected and denied assent such as the new Petroleum Industrial, Electoral Act Amendment and National Water Resources Bills have been reintroduced.

That notwithstanding, the court of public opinion’s verdict indicate that the present National Assembly is a mere rubber stamp or even an appendage of the executive, doing its bid rather than pursuing the interest of Nigerians.
Recently, there were complaints against the approvals of the $22.7 billion by the National Assembly and then the $5.513 billion external loans by the Senate, amongst others.

A Political Scientist at the Nnamdi Azikiwe University Awka, Christian Okeke observed that the relationship between the legislature and the executive in the last five years can be described as both rough and smooth but that has not brought the desired benefits to Nigerians.

“What this means is that we simply need to be careful with what we want in the so-called smooth executive-National Assembly relationship. How does such relationship benefit the country? How does it benefit the common man? What is important is for parliament to assert itself as an institution. A parliament that is firm and which extricates itself from primodial and petty considerations serves the people better. An ‘oh yes’ parliament is simply useless.

“We have witnessed National Assembly passing resolutions, even though advisory to the executive, but such were thrashed by the very executive which it always courts. The whole time, energy and resources devoted in debating and passing the resolution wasted.

“In particular, National Assembly, in solidarity with the wishes of majority of Nigerians, fueled by the worsening insecurity, has consistently expressed disgust over the performances of the service chiefs and has repeatedly called for their removal. But the executive has turned a deaf ear all along. How do you describe that?

“It is important that National Assembly maintains its independence and provides the statutory checks and balances. It must not always romance with the executive, particularly if the latter is such a habitual underperformer.

“Parliamentarians are representatives of the people. As such, their business should always be to do the wishes of the people. They answer to their constituents and so should not be an appendage or annex of the executive. Therefore, their relationship with the executive should be robust and not this kind of thing as presently obtains,” he argued.