Traffic gridlocks, no doubt is a major challenge in Lagos State. On daily basis, commuters lose several man-hours on the road. Prime among the reasons for this are bad roads, obstructions, disobedient to traffic laws and indiscriminate parking of vehicles on major roads by motorists. 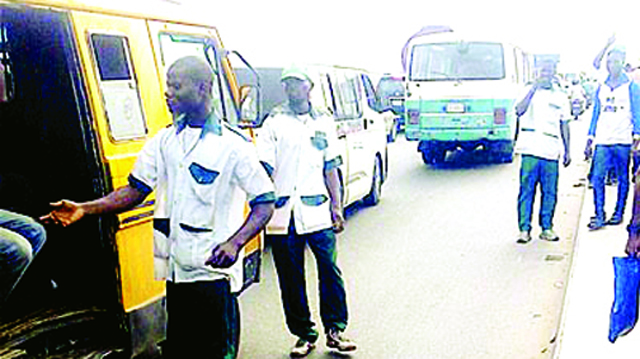 Members of NURTW on duty

With the government working assiduously to reduce gridlock occasioned by some of the factors, the activities of the two transport unions operating in the state have contribute to traffic jam.

The unions include the National Union of Road Transport Workers (NURTW) and Road Transport Employers Association of Nigeria (RTEAN). They operate in garages, motor parks and bus stops across the state through their officials, otherwise known as agberos, or proxies who are park touts.

But, in recent times, some of their members are using makeshift iron barricades to demarcate sections of the road to serve as loading bays for commercial purposes, causing other road users to struggle on the unblocked narrow lanes, resulting in terrible gridlocks.

The Guardian observed that the touts as early as 5:00 a.m. use those points to collect tolls. From Okokomaiko to Alaba Rago, Alaba International, Iyana Iba, Ojuelegba, Mushin, Oshodi, Ikotun, Egbe, Iyana Ipaja, and Ile Epo in Oke Odo local council of the state, the experience is the same as the illegal barricades contribute, in no small measure, to the untold hardship motorists experience daily.

Interestingly, in some instances, the unions’ illegal activities happen in the presence of police officers or close to police stations.

Concerned by the worsening traffic situation in Lagos State, former Governor Bola Ahmed Tinubu had created the Lagos State Traffic Management Authority (LASTMA) to help maintain some level of sanity on the roads.

But it appears that officials of the agency are unable to curb the excesses of agberos.

A motorist, who gave his name as Eze Kalu, said the activities of the touts are becoming unbearable, adding that government must rein in on them.

He noted that the revenue generated by the touts was not going into government coffers but private pockets. He queried the habit of using personal business to disturb other people.

According to a petty trader, Idayat Kolawole, who sells second hand clothes by the roadside, the barricades have caused accidents in some cases, with the touts blaming most of the accidents on drivers or pedestrians.

She noted that the police too are part of the business as the hoodlums give ‘returns’ after the day’s work.

Another motorist, Ibidun Lawal, stated that if the Lagos chapter of the NURTW, locally called Agbero, could generate about N123.08bn yearly, a sum of money that could service the yearly budgets of Nasarawa, Niger, and Yobe States put together, it may be interesting to find out how the money is spent, shared or deployed. He wondered why the transport union could not buy landed properties with part of the fund realised for the purpose of parks and garages so as to ensure that their activities do not disturb Lagos residents.

When The Guardian spoke with one of the union members, he explained that their members do such due to lack of motor park spaces.

He stated that in most areas in Lagos where the barricades are not erected, the touts use commercial vehicles and tricycles, to obstruct free flow of traffic by taking over a portion of the road as loading bay.

Recall that the traffic situation of old Oshodi brought headaches to residents and successive governments before the Babatunde Raji Fashola-led state government brought the situation under control.

For Lagos to attain true megacity status, observers have expressed the view that the state government needs to rid its roads of unnecessary and avoidable traffic gridlocks, just as it is making concerted efforts at remodeling its transportation system in line with modern trends.

Why we sealed IBEDC offices, by Oyo government