Gov. Abdullahi Ganduje of Kano State says, henceforth, teachers and lecturers working with the state owned institutions of learning will be retiring on attaining 65 years. 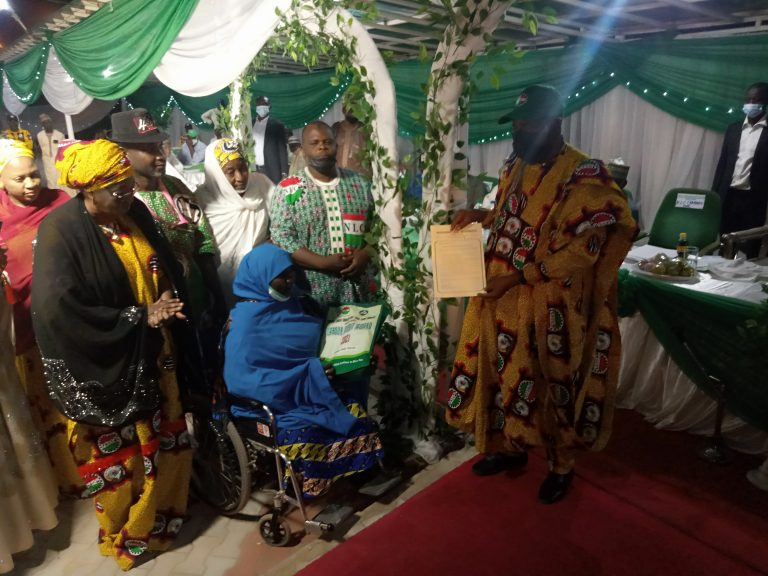 Khadijah Umar, a health worker at Hotoro Healthcare Clinic, who lost her legs on a wheelchair.

The governor announced this at the award night marking the 2021 May Day organised by the Kano State Chapter of the Nigerian Labour Congress (NLC) on Saturday in Kano.

“The Federal Government has since approved this for teachers and lecturers working in its institutions, hence, teachers in Kano State are also not left behind.

“Therefore, our teachers and lecturers as from now on will start to enjoy such retirement age from 60-65, and years of service from 35-40 as the federal workers are enjoying,” the governor said.

According to Ganduje, the state government has introduced so many policies aimed at improving the welfare of its workers.

He added, “We have introduced a contributory health scheme for workers in the state and their families to have the cheapest health services.

“I am happy that with your co-operation, today we have the best contributory health scheme in Nigeria.

“We are also collaborating with the private organisations in the state to see how they can benefit from such schemes aimed at strengthening the policy.’’

The governor also said that the state government had introduced a health trust fund where five per cent of the state’s Internally Generated Revenue (IGR) and one per cent from the earnings of local governments would be contributed.

“And that will provide health services to our workers and the people of Kano State.’’

Ganduje added that the state government would serve as a guarantor for civil servants working in the state who would be willing to access loan facilities from the Central Bank of Nigeria (CBN).

He also said that his administration had introduced free and compulsory primary to secondary schools education.

“Through that, our workers will not have to pinch from their salaries to pay school fees for their children.” he said.

Ganduje said that one important thing done in the state was ensuring peace and stability, security for workers, the citizens and everybody.

He said with that in place, the state would continue to be a place where everybody could flourish in harmony.

The governor also presented a letter of permanent and pensionable appointment to Khadijah Umar.

Umar who had been working as a temporary staff member for the past 15 years at Hotoro Health Care Clinic lost her legs in the course of duty.

Earlier, Mr Kabir Minjibir, the Chairman of Kano State chapter of the NLC, said the awardees were honoured for their hard work and adherence to the Civil Service rules.

He said that the NLC found it necessary to honour not only civil servants who were dedicated and committed to their duties, but also workers from the private sector.

“The NLC is giving certificates of excellence to those that deserved to be honoured while some of them will go home with cash gifts ranging from N50,000 to N100,000 each.” he said.

Minjibir also lauded the Ganduje–led administration for effective security management in the state.

He said that had brought about minimal cases of banditry, kidnapping and other criminal activities in the state.

He also commended the governor for efficient management of the first and second waves of COVID-19 pandemic in the state.

“The governor has been up-to-date in the payment of salaries and pensions in the state, despite the economic turbulence being experienced in the country until recently when the economic situation began to bite harder,” the chairman said.

Minjibir, however, described the theme of the 2021 May Day celebration: ‘COVID-19 Pandemic, Social and Economic Crisis: Challenges for Decent Jobs and People’s Welfare”, as a symbol for continued struggle for the survival under the current economic hardship.

The chairman charged workers to continue to put in their best while discharging their duties.

The News Agency of Nigeria (NAN) reports that the Bola Ahmed-Tinubu Campaign Organisation who were present at the event also pledged to support Khadijah Umar with modern artificial limps.