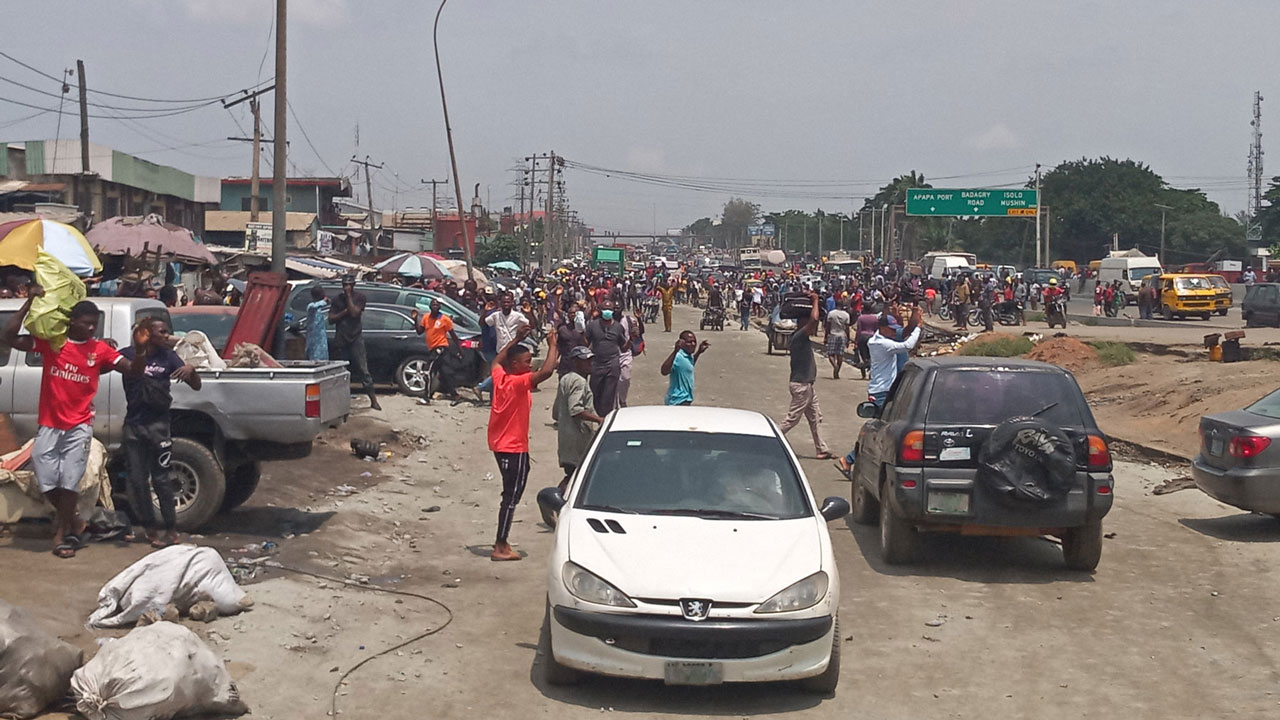 Several  injured, vehicles destroyed
The fragile peace existing at the Ladipo multi-billion naira spare parts market was shattered yesterday by a clash between soldiers and traders.

The clash, which started about 12 noon, resulted in exchange of stones and gunshots.

At the end, no fewer than four people were feared dead and several others injured.

It also led to pandemonium as traders and passers-by scampered to safety.

Though the actual number of casualties could not be ascertained as different figures were bandied by eyewitnesses, The Guardian learnt that seven people were shot.

In the ensuing melee, three soldiers were injured and a service van marked Lagos MUS 732 FZ and one other were torched.

Report had it that a man was knocked down in front of the carnal, while trying to flee the scene, but he was lucky to be unhurt.

Trouble started when a soldier, serving in Akwa Ibom State, Ibrahim Alhaji, allegedly came to Lagos to pick spare parts he bought from one Prince Uchenna, known popularly as Chisco, and on getting there, there was a disagreement that led to other Ladipo boys mobilising against him.

Sensing trouble and danger to his life, Alhaji called his friend who later informed soldiers in Sam Ethnan Airforce base, PWD, Ikeja, Lagos, that a soldier was in danger.

Minutes later, some soldiers moved to the market in a move to rescue one of their own, the boys started throwing stones to chase them away and immediately, the soldiers called for re-enforcement. Minutes later, the sound of gunshots was heard, sending panic among traders who rushed out of the market.

While a leader of the team of soldiers, identified simply as Agunbiade, tried to talk his men into stopping the sporadic shooting to scare the angry traders away, the traders pelted the soldiers further and when the atmosphere became tense, the soldiers withdrew.

According to an eyewitness whose shop is located close to where the fracas started, it all started in the Palamo section of the market when a soldier returned a kick-starter he bought from one of the traders.

“The soldier, who was in mufti and later discovered to be a captain, was furious that the kick starter sold to him was not in perfect shape. He told the seller he would have dealt with him seriously if not for the fact he has known him for a very long time.

“When the issue seems unresolved, the man and the soldier were taken to the Task Force office for a possible mediation.

It was there he brought out his identity card to the surprise of all. As the dialogue continued, a man just came from behind and slapped the soldier twice.”

He said the soldier, who neither reacted nor uttered any word, just left the scene to make phone calls, which led to the arrival of six soldiers, who came in their camouflage Hilux pick-up van.

“Immediately the Ladipo guys sighted them, they closed the gate to the entrance and started pelting them with empty bottles. Suddenly, one of the guys standing at the back of the van was hit by the bottle and blood started gushing out.

“As he touched his ear and discovered there was blood, he brought out his gun and started shooting sporadically. The gunshot hit seven people, on the neck, side and other parts of their bodies.”

The trader, who was identified as Scatter, died in Isolo General Hospital when he was not attended to on time.

When The Guardian spoke to Alhaji, he said he was not a stranger to Uchenna as he served his father in Benue State before he joined the Nigerian Army. “I asked him about the goods I paid for and soon, it became a big argument and he called his people to beat me up. My friend who is living close to the barracks informed the soldiers of my ordeal and they came to my rescue. I did not personally call the soldiers. They stole my phone and N50,000.

The chairman of one of the branches in the market, Emmanuel Mbamalu, said he was on his way to an event when he got calls from his people that there was pandemonium in the market and he decided to return to the market only to be welcomed with the sound of gunshots.

We always solve issues between traders and customers here and a kick-starter is not big enough to lead to the death of my people. I can replace what was destroyed in the vehicles but those killed cannot be brought back to life. We are not animals and Ladipo is not Sambisa,” he said.

But an Air Force personnel, T. Emuren said: “Soldiers cannot come into the market and start beating traders. Ladipo men started throwing stones at the soldiers and they had to defend themselves